Test tubes at the National Institutes of Health in Bethesda, Md., on Feb. 7, 2018.
Photo: Saul Loeb/AFP via Getty Images

Lawmakers are hewing closely to President Joe Biden’s proposal for a new $6.5 billion science agency as part of a sweeping measure to deliver medical breakthroughs.

Reps. (D-Colo.) and (R-Mich.) on Tuesday released a draft bill, dubbed Cures 2.0 — the follow-up to the landmark 21st Century Cures Act biomedical innovation law (). The legislation’s release coincides with a commentary in Science magazine setting forth the vision of White House science office and National Institutes of Health officials for the Advanced Research Projects Agency for Health, as well as why it would be different from existing programs and centers.

“The federal government has amazing resources at its disposal,” DeGette and Upton said in a joint statement. “Now is the time to put the full weight of those resources to use to cure some of the world’s most devastating diseases, such as cancer, diabetes, Alzheimer’s and more.”

Enactment of the legislation would achieve a personal priority for Biden, whose son died of cancer in 2015. Biden has championed biomedical research, and led the Cancer Moonshot initiative as vice president. He began meeting with DeGette, Upton, and other lawmakers to discuss health research initiatives soon after taking office. 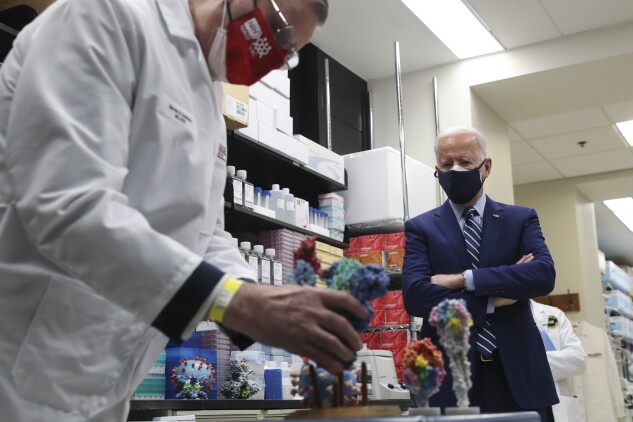 DeGette and Upton plan to hold roundtables about their proposal in June and July with the aim of releasing a final bill after Congress returns from its August break, DeGette said in an interview. The goal is to get the legislation onto President Joe Biden’s desk before the end of the year, she said.

“We’d like to pass the bill this year,” DeGette said.

Cures 2.0 would authorize ARPA-H and also touch on almost every part of the health-care system—from the authorization of medical research, to the Food and Drug Administration’s regulation of medical products and Medicare’s payments for cutting-edge treatments. The bipartisan duo have said they want to pass their bill by the end of the year.

The legislation “picks up important areas to advance science and innovation,” Esther Krofah, the executive director of FasterCures, a center of the nonprofit Milken Institute, said in an email.

Krofah lauded the bill’s support for developing antimicrobial innovations and increasing diversity in clinical trials, which was revealed to be challenging during the Covid-19 pandemic. She also backs the bill’s provisions on cell and gene therapies, accelerating research, and continued support and promotion of patient experience data in clinical trials.

DeGette and Upton’s work on the follow-up to Cures began before the pandemic and was initially focused on the delivery of care. While that language is still in the legislation, the lawmakers added provisions directing the Centers for Disease Control and Prevention and the Health Resources and Services Administration to come up with a pandemic preparedness plan. They also propose $25 million annually for the CDC to fund a public education campaign on the importance of vaccines for fiscal 2022 to 2024.

The draft bill would authorize $25 billion to “spark the economy” by funding independent research institutions, public laboratories, and universities. The NIH estimates it lost or delayed about $16 billion worth of research due to Covid-19. The bill would fund all sorts of research beyond health, including energy, agriculture, and defense.

Sens. (D-Wash.) and (R-Mo.), the chair and the ranking member of the Senate Appropriations health subcommittee, support the ARPA-H concept but haven’t introduced legislation to establish it.

ARPA-H would be modeled on the Defense Department’s DARPA research program and the Energy Department’s ARPA-E, but the medical research counterpart “will need to pioneer new approaches,” the Science commentary said.

“Although DARPA is an excellent inspiration for ARPA-H, it is not a perfect model for biomedical and health research. It serves the needs of a single customer, the DOD, and its mission is focused on national security” according to the commentary, whose authors include NIH Director Francis S. Collins and White House science adviser Eric S. Lander.

10 Diseases, 1 Vaccine? NIH Head on What Biden Center Could Do

“The biomedical research ecosystem has delivered advances that not long ago would have been inconceivable,” such as Covid-19 vaccines, the authors wrote. “Through bold, ambitious ideas and approaches, ARPA-H can help shape the future of health and medicine by transforming the seemingly impossible into reality.”

The draft bill also aims to accelerate the development of cell and gene therapies, a burgeoning area of potentially curative but pricey therapies with more than 900 products in the pipeline. It would require the Health and Human Services Department to submit a report to Congress on the state of cell and gene therapy regulations and any challenges the FDA may encounter.

The Alliance for Regenerative Medicine said that while the report can educate policymakers on these cutting edge treatments, “an improved regulatory framework alone will not enable our healthcare system to deliver 21st Century innovations to patients.”

The alliance said it wants more outcomes-based payment models as part of Cures 2.0 or other legislation. Cutting-edge, curative therapies stand to benefit from reimbursement models that are based on how well a treatment works because they are one-time treatments that can cost millions of dollars instead of drugs taken repeatedly over a period of time.

(Updates with DeGette comments on timetable for legislation in fifth and sixth paragraphs.)

To contact the editors responsible for this story: at sbabbage@bgov.com; at akramer@bloomberglaw.com