This Thanksgiving, consumers can give thanks that their turkey, unlike many other meats, isn’t the focus of a federal antitrust price-fixing probe.

Food industry consolidation that’s left a handful of companies controlling 80% of livestock production in some markets has made engaging in price fixing simpler, said Claire Kelloway, a food and agriculture researcher at think tank the Open Markets Institute. Mergers mean there are less players to coordinate with, she said.

New technology helps, too. Pork and chicken producers, both of which are subject to Justice Department probes, allegedly use a data subscription service called Agri Stats Inc. to coordinate and monitor each others’ prices, according to several civil suits.

“It makes price fixing easy,” said Austin Frerick, deputy director of Yale University’s antitrust research group, the Thurman Arnold Project. “All you have to do is just log on from your desk.”

Price-fixing schemes are nothing to cluck at since they can lead to higher costs for both consumers and food distributors and also lower profit margins for small food producers, such as local cattle farmers, who contract with national companies.

Turkey in the Clear

Yet turkey, an $18 billion industry, is one of the lone proteins not subject to any publicly known federal investigation or private suit, even though many top U.S. turkey producers, such as Cargill Inc. and Tyson Foods, allegedly sought to fix prices of other foods.

One difference: Thanksgiving aside, consumers eat a lot less turkey than pork, beef, and chicken. It’s the least consumed protein per pound, per capita, with only 16 pounds projected to be eaten in 2019 compared to more than 110 pounds of chicken, according to statistics from the National Chicken Council.

The scrutiny on food price fixing predates this holiday season. The DOJ has already won guilty pleas from the nation’s top tuna producers, StarKist Co., Bumble Bee Foods LLC, and Chicken of the Sea Inc., which have admitted to coordinating with each other to fix prices for packaged seafood sold in the U.S. 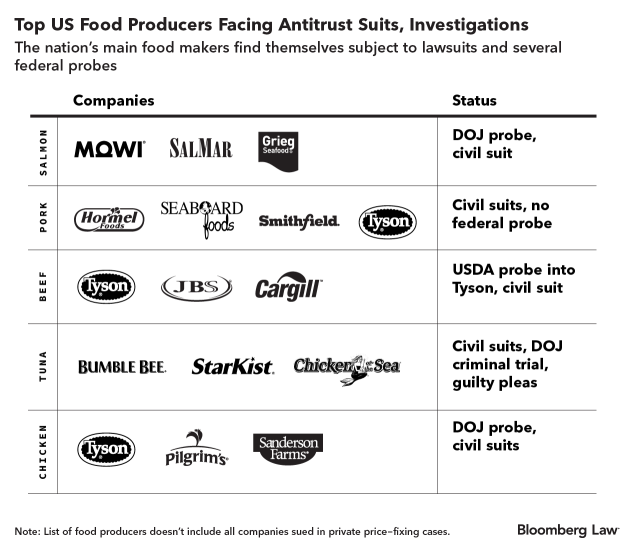 The number of food producers has shrunk significantly due to mergers in recent decades.

“These allegations are a pretty predictable outgrowth for permitting such high levels of market concentration,” Kelloway said.

Tyson Foods, Pilgrim’s Pride, Sanderson, and several other poultry producers are said to control 98% of all chicken meat sold in the U.S., according to a multistate civil lawsuit which the DOJ intervened in. Those three producers have denied price-fixing allegations.

Collusion in the industry “won’t go away until we address the concentration issue here,” said Frerick.

Frerick suggested structural fixes, such as a breakup of the largest food producers, as the best way to prevent the continuance of price fixing.

What may turn out to be the crucial tool that facilitated possible price-fixing schemes in both the pork and chicken industries is Agri Stats, a subscription service used by the nation’s top producers to view production practices across various food groups.

Agri Stats didn’t reply to a request for comment.

To contact the reporter on this story: in Washington at vgraham@bloomberglaw.com