President Joe Biden named chairwoman of the , an unexpected move that puts one of the most prominent advocates of aggressive antitrust enforcement against U.S. technology giants in charge of the agency.

News of Khan’s appointment came hours after the Senate confirmed her for a seat on the FTC by a vote of 69-28. She will take over the agency from Acting Chairwoman , who has been a commissioner for three years and had been expected by some to be tapped by Biden to lead the agency permanently.

Khan’s elevation to chairwoman marks her rapid rise to the top of U.S. antitrust enforcement. Currently a professor at Columbia Law School, just a few years ago she was a law student at Yale University. Now the 32-year-old is in charge of one of two agencies responsible for policing competition in the U.S. The other is the Justice Department’s antitrust division.

“It is a tremendous honor to have been selected by President Biden to lead the Federal Trade Commission,” Khan said in a statement after she was sworn in. “I look forward to working with my colleagues to protect the public from corporate abuse.”

As chairwoman, Khan will need a majority of the five-member agency to make enforcement decisions, but she will have significant control over the staff who conduct the agency’s competition and consumer-protection investigations. She will join two Democrats -- and -- who have long sought to pursue a more aggressive antitrust agenda.

Khan rose to prominence with a 2017 research paper on that she wrote as a law student at Yale University. The paper casts the online retail giant as a harmful monopoly and argues that the company employs practices that should provoke a rethink of antitrust enforcement in the U.S. 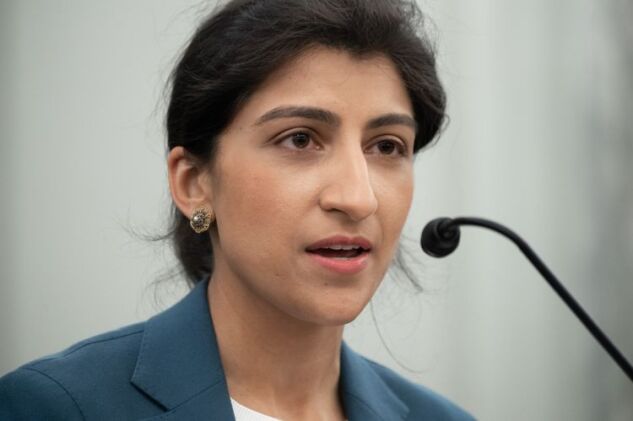 Her work put her at the forefront of an anti-monopoly movement known as the New Brandeis School that says the traditional playbook for policing mergers and anticompetitive conduct has failed, leading to concentrated economic and political power across the economy.

Once on the fringes of antitrust thinking, support for breaking up tech firms and calls for overhauling antitrust laws have gone mainstream. Last week, House lawmakers a series of bills that would put new restrictions on how tech firms operate and in some cases force them to exit certain businesses.

Senator of Massachusetts, who breaking up tech companies when she was campaigning for the Democratic nomination for president, praised Khan’s appointment, calling her a “fearless champion for consumers.”

“Consolidation is choking off competition across American industries,” Warren said in a statement. “With Chair Khan at the helm, we have a huge opportunity to make big, structural change by reviving antitrust enforcement and fighting monopolies that threaten our economy, our society, and our democracy.”

Still, Khan has her detractors. When she first emerged as a possible candidate for the FTC, Republican Senator of Utah called her views on antitrust “wildly out of step with a prudent approach to the law.”

Tech-funded advocacy organizations were quick to criticize Khan’s confirmation. NetChoice, whose members include Amazon and other tech companies, accused Khan of “antitrust activism” that it said will politicize the FTC and harm America’s economic exceptionalism.

“Khan has a strong career in persuading the American left of her proposed reforms to antitrust law, but the job of an FTC commissioner is to enforce antitrust laws as they are, not as the commissioner wishes they would be,” , NetChoice’s general counsel, said in a statement.

Slaughter said she looked forward to working with Khan to ensure “that markets work for all people.”

Khan’s nomination in March and the appointment of her Columbia colleague as White House adviser on competition policy President was preparing to take a tougher approach to antitrust enforcement. But nearly five months into his administration, Biden has yet to nominate a leader for the Justice Department’s antitrust division, which shares antitrust enforcement with the FTC. Biden didn’t announce his intent to name Khan chairwoman when he nominated her.

Democratic Senator of Minnesota, who chairs the Senate Judiciary Committee’s antitrust panel, which would consider Biden’s choice for the antitrust division, said in an interview that she hopes the administration nominates someone for the position soon.

“The fact they put in Tim Wu and Lina Khan really shows that they’re interested in seriously taking on these issues,” she said.

The FTC’s Democratic majority with Slaughter, Chopra and Khan may be short-lived. Biden nominated Chopra to lead the Consumer Financial Protection Bureau. He is still awaiting Senate confirmation after the Senate Banking Committee in March split on his nomination along party lines.

At her confirmation hearing, Khan lawmakers that antitrust enforcers need to scrutinize the power that large technology companies have over digital markets, from app stores to online journalism. She called out the dominance that and ’s Google have over app stores on mobile devices, saying terms like Apple taking 30% of the revenue earned by some developers can’t be justified.

“The source of the power is the fact that you have basically these two main options, and so that gives these companies the power to really set the terms in this market,” she said. “Certain terms and conditions really lack any type of beneficial justification.”

After law school, Khan worked at anti-monopoly think tank Open Markets Institute and as an adviser to Chopra at the FTC. She was also counsel to the House antitrust committee, which last year concluded an investigation of Google, Apple, Amazon and

Khan was one of the authors of the panel’s report on the investigation, which accused the tech firms of abusing their roles as gatekeepers in the digital economy and in the process eroding innovation, entrepreneurship, privacy and consumer choice. It also included a series of recommendations for reforms to antitrust laws.

(Updates with Khan swearing in and statement in fourth paragraph)