The recent explosion in 401(k) fee litigation has spawned more than $150 million in settlements just in suits filed in the past three years, driven by eight-figure deals signed by , , and , along with more than two dozen smaller deals worth less than $5 million.

Workers challenging their retirement plan fees have filed more than 200 proposed class actions in federal court since 2019. At least 33 of them have culminated in class-wide settlements, with the average deal valued at about $4.7 million and most deals clocking in below $2 million, according to a Bloomberg Law analysis.

, , , and are among the employers that have signed million-dollar accords. A handful of cases have settled for less than $1 million, including those against Yanfeng Automotive, Icon Clinical, and BTG International.

The settlements, which are both smaller and occur more frequently than those seen in prior years, reflect a massive uptick in the number of cases filed and an expansion in the types of employers and plans being targeted.

“From a factual allegations perspective, employers can take very few actions to protect themselves at this point,” said attorney Heather M. Mehta, who represents employers and plan sponsors. “There’s almost always an allegation that plaintiffs’ lawyers can make to make it look like your processes might not be prudent.”

They also reflect a litigation environment that’s tended to favor plaintiffs in the early stages, along with a recent US Supreme Court ruling poised to continue that trend and potentially push settlement amounts higher in the future. 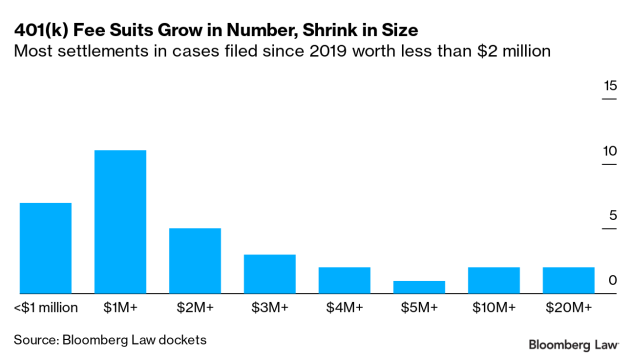 Only a few recent cases have spawned the kinds of sizeable, eight-figure settlements seen in earlier rounds of 401(k) litigation against companies with massive retirement plans, including ($62 million deal signed in 2015), ($57 million in 2015), and ($55 million in 2019). Of the companies sued more recently, only McKinsey ($39.5 million), Wells Fargo ($32.5 million), and Walgreens ($13.75 million) have signed deals approaching those levels.

This shift toward smaller and more frequent settlements has a few explanations.

For one, many recent defendants are smaller companies with smaller retirement plans. More than half the settlements reviewed by Bloomberg Law involved plans with less than $1 billion in assets. Lockheed Martin’s retirement plans held more than $14 billion when it was sued in 2006, and Boeing’s held about $25 billion, according to court filings.

The outside range of potential liability for plans holding many billions of dollars can be incredibly large, Joseph A. Creitz, a partner with Creitz & Serebin LLP in San Francisco, told Bloomberg Law.

To the extent recent lawsuits have targeted smaller companies and smaller plans, “you would expect the size of the claims to be significantly smaller,” Creitz, who represents benefit plan participants in class lawsuits, said.

It’s also possible some employers have begun to see these settlements as part of the costs of doing business. Cases are widespread and can challenge seemingly any aspect of a plan’s administration or an employer’s fiduciary processes, Mehta, an officer with Greensfelder, Hemker & Gale PC in St. Louis told Bloomberg Law.

Employers negotiating future settlements may be facing higher price tags than the $1 million to $5 million range seen over the past few years.

One reason is the Supreme Court’s January decision in Hughes v. Northwestern Univ., which held that workers’ ultimate choice over their retirement investments doesn’t excuse a plan that offers bad funds. The justices rejected a “categorical rule” that would excuse bad funds if good ones are offered, but they resisted announcing other rules to guide judges in considering whether these cases are viable.

Decisions issued in the seven months since Hughes have tended to favor plaintiffs over defendants, with some noteworthy exceptions. To the extent Hughes allows more plaintiffs get past a motion to dismiss—as they did in earlier cases that settled for eight figures—that could cause settlement values to tick higher.

Of the settlements reviewed by Bloomberg Law, cases that survived a motion to dismiss settled for nearly $1 million more than cases resolved before a motion to dismiss ruling was issued. The post-ruling group of cases settled for an average value of just over $5 million, while the pre-ruling group had an average settlement value of about $4.3 million.

“The earlier a defendant is willing to come to the settlement table, the better a deal that defendant can negotiate for itself,” Creitz said.

The onslaught of litigation, which began about 15 years ago and exploded in 2020, has coincided with some good news for plan participants: the average expense ratio paid by fund investors has been falling for two decades and was cut by more than half between 2001 and 2021, according to a July report from Morningstar.

“There’s no question the litigation has caused fiduciaries to pay more attention to fees and negotiate better fees for their beneficiaries,” Creitz said.

Mehta agreed the litigation has had at least some influence on fees throughout the industry, though she said it was unclear whether to credit causation or correlation.