Protestors in support of former President Donald Trump gather outside Veterans Memorial Coliseum in Phoenix on May 1, 2021. Inside the coliseum ballots from the 2020 general election were being recounted.
Photographer: Courtney Pedroza/Getty Images

Arizona Republicans still distraught that voters rejected both Donald Trump and their incumbent U.S. senator are hyper-scrutinizing millions of ballots, looking for anything other than the candidates themselves to account for their top-of-the-ticket defeats.

Six months after a presidential election that saw Joe Biden become the first Democrat in a quarter century to capture Arizona, an unconventional audit and recount of 2.1 million ballots continues in the state’s most populous county, funded by taxpayers and undisclosed amounts of private money and ordered by Republican lawmakers giving credence to Trump’s claims of voter fraud.

GOP leaders are promising that the audit, which can’t legally overturn the results, will help restore confidence in an election system that already included multiple accuracy checks and certification by the secretary of state.

“The sole thing is to get answers so that if we have any problems, we can fix them and we make sure that the next election is safer, cleaner, and run smoothly,” Senate President Karen Fann (R) told KTAR News.

But Richard L. Hasen, a professor at the University of California, Irvine, School of Law who specializes in election law, said: “This particular audit is another way to show fealty to Donald Trump.”

Fann said the audit is addressing concerns of people who don’t believe the 2020 election was fair, but Hasen called it “more of a performance than any attempt at determining the truth.”

Political pundits predicted before the election that Trump and McSally could fare poorly in Arizona because the state has for years trended less Republican and its voters prefer more moderate candidates.

While the recounting, which started April 23, has been deemed a legal use of the state Senate’s power, it’s part of a larger partisan upheaval across Arizona in the six months since the election. 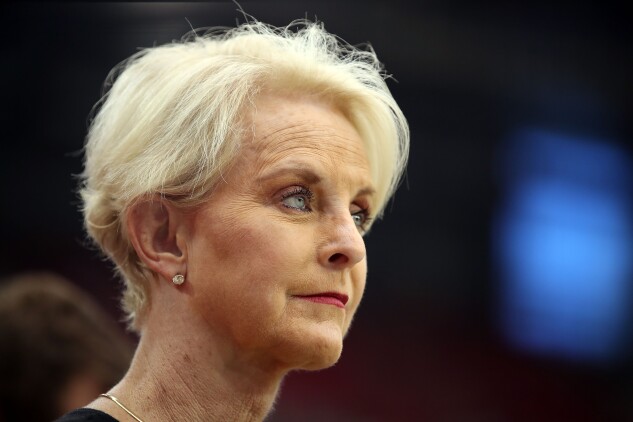 The “huge, acrimonious event” is extending divisions among Arizona Republicans and could drive away potential voters, said Rae Chornenky, former chair of the Maricopa County Republican Party, who resigned after the election. “I think we need to dial it back.”

The unprecedented recount at the state fairgrounds arena in Phoenix has spawned ultraviolet light scans, ink-color hiccups, a legal challenge—and a shoutout by Trump last week on a conservative podcast.

Arizona Secretary of State Katie Hobbs (D) tweeted Friday that the process amounts to “an elaborate political stunt.” And Arizona Senate Democrats tweeted that a former state lawmaker helping with the recount was among Trump supporters outside the U.S. Capitol on Jan. 6, when the building was stormed.

The Arizona Republican Party, on its official Twitter account, countered that “Democrats ramp up efforts to undermine” what it’s calling “America’s Audit.”

Once known for small-government Goldwater Republicans and later the independent-minded McCain, Arizona now fits into a broader group of states including Florida and Georgia where lawmakers are passing Republican-sponsored voting restrictions after Trump’s loss. But the state appears to be the only one still trying to recount ballots from November “as a way of pleasing the Trumpian base,” Hasen said.

Maricopa County was the Arizona GOP’s main target of fraud accusations during the November election and the days of ballot counting that followed. The Republican-led Maricopa County Board of Supervisors fought the state Senate over terms of its audit and contracted its own independent reports that showed no irregularities.

The current Senate audit of nearly 2.1 million subpoenaed ballots and other election equipment is expected to be completed by May 14 at the direction of Cyber Ninjas, a Florida-based company hired to run the recount. The choice sparked concerns after The Arizona Republic and other media outlets reported that CEO Doug Logan had previously spread unfounded election fraud claims on social media.

The Senate contracted with the company for $150,000 to be paid with taxpayer funds, but costs will exceed that, said former Secretary of State Ken Bennett (R), the Senate’s liaison for the audit. The rest will depend on private donations, Bennett said, pointing to a fundraising site that lists its goal as $2.8 million. Bennett said he will push the Senate to review and disclose the funding.

Cyber Ninjas’ scope of work includes scanning and examining every ballot to check federal races and reviewing electronic voting systems. The agreement said the company could use phone calls and door knocking to audit voting in precincts “that have a high number of anomalies.”

Hobbs flagged concerns to Arizona Attorney General Mark Brnovich (R) following reports of security lapses at the arena, which Brnovich declined to investigate. A reporter also noted on April 23 that audit volunteers were initially equipped with blue pens, an ink color that can be read by tabulators and potentially compromise ballot integrity. 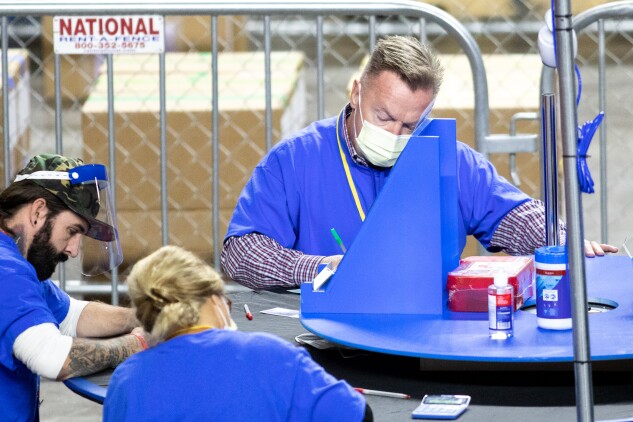 Groups including the Brennan Center for Justice last week asked the U.S. Department of Justice to send monitors to watch the operations.

Cyber Ninjas originally kept its audit and security policies private, arguing they contained trade secrets and could be used to disrupt operations, until a court ruled April 28 that they be made public. Documents released by the company the next day include procedures used by subcontractors for digital evidence, counting, and evidence handling.

Logan said in a statement that Cyber Ninjas is coordinating four companies working on the audit and that each “has election experience in that area.” He said Cyber Ninjas participated in Michigan and Georgia election audits, though the company did not respond to a request for additional details. A Michigan judge will let the company weigh in on a state election report related to voting report mistakes, mlive.com reported.

Arizona auditors intend to produce a report on their findings. Those conclusions could point lawmakers to parts of the election system that need improvement, Bennett said.

The Senate has the right to conduct the audit, Martin said. The legal question lies in whether Cyber Ninjas’ procedures protect a voter’s right to secrecy and confidentiality, he said.

But an audit that doesn’t follow best practices could continue to damage voter confidence shaken by last November’s election, said David Becker, executive director of the nonprofit Center for Election Innovation and Research, which works with both Blue and Red states on election issues. “To set policy based on a fantasy is always a bad idea.”

To contact the editors responsible for this story: at tmay@bloomberglaw.com; at ghenderson@bloombergindustry.com

Brenna Goth
Staff Correspondent
Republicans Angry About Biden Lash Out At Each Other in Arizona
Arizona Leads Ballot Clampdown for GOP Reckoning With 2020 Loss
© 2022 The Bureau of National Affairs, Inc.
All Rights Reserved