When interviewing patent attorneys for a job, law firm founder Susanne Jones typically wants to see a writing sample. The candidates’ samples often have something in common: someone else is listed as the author.

The practice of senior lawyers taking credit for the work of young associates has become routine for many junior attorneys, who are often loath to challenge it. But new research shows it can have an outsized impact on women, who continue to be underrepresented at the highest levels of law firms.

Focusing on documents filed with the U.S. Patent and Trademark Office, the research found women lawyers are systemically under-attributed for their work. This can impact the trajectory of patent attorneys’ careers. It also underscores broader issues in the legal industry.

“It looks like there’s a pretty strong correlation between being a woman and being overlooked,” said Jordana Goodman, a visiting clinical assistant professor of the Boston University and MIT Technology Law Clinic who conducted the study.

The candidates Jones interviews have similar explanations: they wrote the patent applications or researched and wrote the arguments, but the partner signed the document. Jones generally believes them but says it’s tough to be sure.

“From the hiring perspective, it can certainly have an impact,” said Jones, founding member of the IP law firm Jones Robb PLLC in Virginia.

Goodman’s study looked at almost 219,000 patent applications and corresponding office actions—responses to issues raised by a patent examiner during the application process—filed with the office from 2016 through 2020.

Women were credited as authors on fewer documents than their male peers, relative to their representation as patent attorneys and agents, Goodman found. Patent agents aren’t attorneys but can work on inventors’ patent applications.

For example, in the sample set, 15% of the patent attorneys working with semiconductor technologies were female. But just 10% of the office actions were attributed to women. Similar disparities were found in other technology areas, including transportation, computer software, and chemical engineering.

Goodman found that the gap in acknowledging credit grows larger the further along attorneys are in their careers. Among more experienced attorneys, males were attributed more than twice as often than females. Men were also more likely to over-credit themselves than women, the study found. More than 90% of the attorneys considered “high-credit,” logging over 300 office action responses in a year, were men.

“It leads me to believe that men get to put their names on things early and this early recognition initiates a snowball effect, helping men to accumulate a greater number of credit opportunities,” than for women, Goodman said.

“It also seems like, over time, some attorneys develop a blind spot and fail to credit younger—and especially female—associates for their work,” Goodman added. The result is that “women get overwhelmingly left out of this process of credit.” 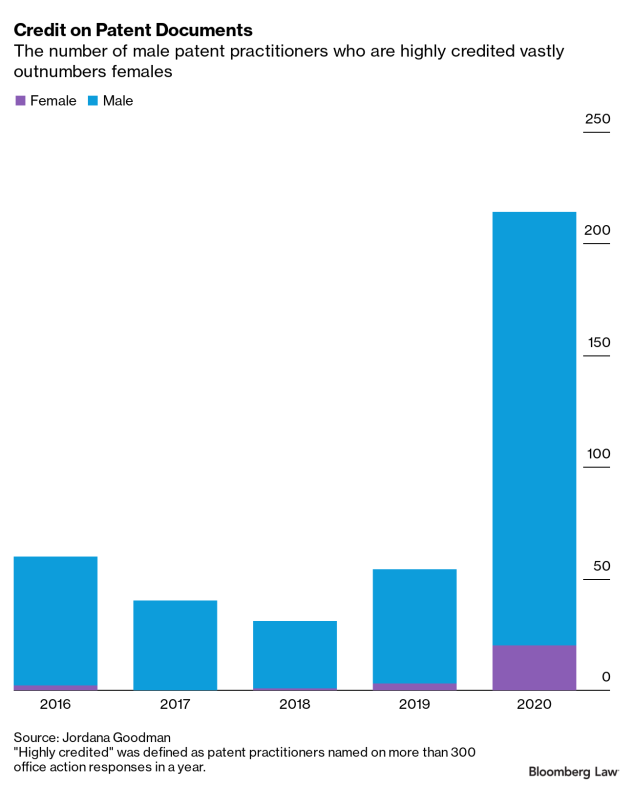 Not Conducive to Change

The findings align with the experience of Nicole Morris, who worked as a patent attorney at various firms before becoming a professor at Emory University School of Law. It was an unwritten rule, Morris said, that younger associates don’t have control over their work.

“I would prepare it all up for their signature,” Morris said.

“Their” was the partner who secured the client or was assigned to the file. Often, that partner is a man. Women made up less than 26% of law firm partners in 2021 but over 48% of associates within law firms, National Association for Law Placement data shows.

Coorg said these kinds of policies have been framed as protecting inexperienced attorneys. There are certain pressures that come with signing your name to a document like a patent application, which may deal with companies’ key technologies and may be worth millions of dollars.

Some attorneys acknowledge they would have been reluctant to sign a patent application when they were starting out. Still, those same reservations don’t necessarily apply to other kinds of work, including office actions.

“I would’ve preferred to get attribution for that,” Morris said. “To the extent that it was a successful argument, now you know that was my signature on the communication and it’s very clear that I was the author of that work.”

The findings add to a growing body of statistical and anecdotal evidence that female lawyers don’t receive the same credit, or opportunities, for work.

A 2019 report found 50% of experienced women lawyers were satisfied with recognition received for their work, compared with 71% of men. Other studies have found women are consistently underrepresented in lead counsel roles in litigation, as well as arguments before federal appeals courts.

Female lawyers have also reported not being given credit for expanding client relationships or their role in winning new business, according to a 2021 report.

“Biases continue to play not only in who gets the assignment but who gets the credit after the work is done,” said Linda Chanow, a lawyer and chief operating officer of the Chicago-based Institute for Inclusion in the Legal Profession, who co-authored the 2021 report.

“If we continue to deny women and lawyers of color opportunities to do the work, it perpetuates this cycle of not being able to get additional work,” Chanow said.

Clients also notice whose names are on filings, lawyers say, which means not receiving credit can affect female lawyers’ cache with those companies. Lack of opportunities and being denied credit have also been cited as factors in women’s decisions to leave law firms.

“If you’re not going to be included when you’re at the law firm, why would you feel like you want to continue and pursue that career?” Goodman said. 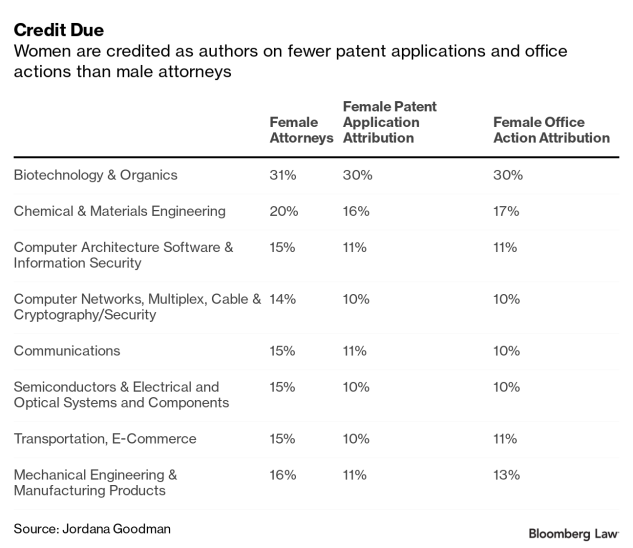 Self-confidence is also an issue, attorneys said. Before starting her own law firm, Jones worked at Finnegan Henderson Farabow Garrett & Dunner LLP, an IP law firm. Jones said while there she signed work and credited Finnegan for giving attorneys at different levels access to clients.

“I didn’t think much of it and it actually probably gave me the confidence to start my own firm relatively junior into my career,” Robb said.

There are efforts to give young attorneys more exposure. Federal judges and administrative judges are urging law firms to let women and diverse attorneys argue, while major companies like Facebook and Novartis push firms to improve racial and gender diversity.

Goodman’s report recommends requiring attribution for all patent practitioners who materially contribute to a work. It also suggests law firms revisit their policies on attribution.

“It’s very much a ‘this is how we’ve done it, this is how we are always going to do it’ mindset until someone says, ‘You know, you don’t have to do it this way,’” Morris said.

To contact the editors responsible for this story: at csaenz@bloombergindustry.com; at ataylor@bgov.com