Yolanda Henderson thought she had a winning idea with a glitter paint she called “All That Glitters.” U.S. Patent Commission Ltd. told her it was brilliant, and offered to help her achieve entrepreneurial riches.

After paying the company $2,700, the Minnesota resident had no patent or licensing deal for her invention. She sued U.S. Patent in 2015, entered arbitration and eventually settled the case.

Invention promotion companies re-entered the spotlight last month with the revelation that acting U.S. Attorney General Matthew Whitaker was a former board member and endorser for the now-defunct World Patent Marketing, which was shut down by the Federal Trade Commission last year and hit with a $26 million judgment for bilking inventors.

Their core model has been around for decades, despite efforts by the FTC and state attorneys general to shut many of the companies down. Several attorneys with decades of experience told Bloomberg Law they’ve never heard of an invention promotion company delivering on its promises.

“There’s smart people putting together these scams. They always seem to find their way around the rules,” said Reed Heimbecher, who leads Dykema Gossett PLLC’s intellectual property transactional practice group. “I don’t know how you regulate them properly.”

The FTC counted 947 fraud complaints against “inventions/idea promotions” companies in 2017, up from between 402 and 657 annually since 2007. The numbers suggest that enforcement efforts and laws like the 1999 American Inventors Protection Act, which required companies to disclose success rates to clients, have hardly stemmed the tide.

“They’re promising false hope that they can market a person’s invention successfully with enormous return, and what we’ve seen is that these claims are false,” Lois Greisman, associate director of the FTC’s division of marketing practices, told Bloomberg Law. “Consumers want to be inventors and innovators, and every entrepreneur wants to make money. So there is a target audience for the fraudsters.” 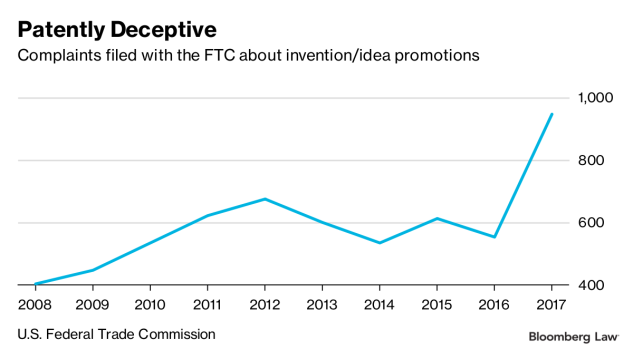 Invention marketers have stayed in business by using arbitration clauses in their clients’ contracts to block class actions, settling individual lawsuits quickly to avoid discovery and attention, or changing their names and starting over after being disciplined by regulators, according to patent attorneys and regulators. Changing names can also help duck unflattering reports from the Better Business Bureau, which has been warning consumers about invention marketing companies since the 1990s. U.S. Patent Commission Ltd. had previously been known as Invent Worldwide Consulting LLC, according to Henderson’s suit.

Even when they disclose their success rates or use disclaimers about the odds of success, lawyers and lawsuits say many firms exaggerate success stories in interactions with inventors and use other veils of legitimacy, including associating with credible public figures.

World Patent Marketing touted Whitaker’s former position as a U.S. Attorney, according to FTC documents. Whitaker, who said in 2014 he “would only align myself with a first class organization,” has since said he had no knowledge of any fraud and didn’t interact with any customers. He did threaten legal action against an individual who threatened to complain to the BBB, according to court documents.

A television ad lured in Deborah Dungee, who had an idea for scented balloons called “Smelloons.”

The Delaware resident paid Davison Design & Development Inc. $685 for product research, plus a patent search and provisional patent application. After she was encouraged and told the idea was patentable, she paid another $8,465 for Davison to produce samples and marketing materials.

What she didn’t realize that was Davison was in the midst of an FTC lawsuit, which called the company “typical of invention promotion scams.” Davison eventually paid the FTC $26 million in restitution—the same amount as WPM was ordered to pay. Davison president George M. Davison III, who was named in the FTC suit, declined to comment.

What Henderson and Dungee experienced fit a pattern familiar to patent lawyers and regulators.

Clients often pay for a professional looking but templated report that paints a positive picture of the invention’s prospects, Angie Holt, a patent attorney for Bradley Arant Blount Cummings LLP, said. Those reports rarely include thorough searches of similar products, which attorneys told Bloomberg Law are skipped on purpose to keep the client excited and limit liability for failure.

Companies say they pitch clients’ inventions to well-sourced business contacts when their marketing efforts often consist of unsolicited pitch letters. Any company claiming “we’ll promote your invention to industry” should be a “dead giveaway that it’s a scam,” Mark E. Ungerman of Ungerman IP PLLC said.

“They don’t really promote anything. At best they have a list of potential inventions that nobody in industry cares about,” he said.

Marketers can evade the spirit of the success-rate disclosures required under the American Inventors Protection Act by only including the subset of clients who get more services by paying for premium packages, according to Dungee’s lawyer, Richard Cross of Cross & Simon LLC.

Some invention marketers do work with patent attorneys, but even that is no guarantee of legitimacy. WPM’s attorneys generally didn’t interact directly with inventors and used sales and marketing people as go-betweens, according to court documents. The back-and-forth between patent expert and an inventor is essential to successfully getting a patent, and any other arrangement should serve as a red flag, attorneys told Bloomberg Law.

Patent attorneys told Bloomberg Law that they would reject most ideas from independent inventors as either not novel or not valuable. But “those are the ones who are preyed on” by promotion companies, Ungerman said.

Obtaining a patent isn’t easy. Getting to the stage of making prototypes, much less an entire business, is expensive. Countless scientists, engineers and designers dedicate decades to innovating and experimenting, often in teams on payrolls of large companies and research institutions. And companies would rather work around a patented idea an inventor wants to license than pay royalties.

“You need a really pioneering idea” to have even a chance at a licensing deal, Heimbecher said.

Even when inventors know scams exist, and their odds of getting rich are low, self-confidence often leads to an “invulnerability illusion,” said Katherine Hutt, national spokeswoman for the Better Business Bureau.

“People have to understand that there’s always someone out there willing to make money off your optimism,” she said.

Bringing a case against invention-promotion companies can be time consuming and expensive. The FTC can only focus on the worst offenders amid finite resources, Greisman said. The hundreds of annual complaints represent less than half of 1 percent of fraud complaints received by the FTC.

The FTC receives complaints from the BBB and the U.S. Patent and Trademark Office, both of which warn against invention promotion companies on their websites. The PTO can discipline lawyers who conspire with fraudulent companies.

Robert W. Gray, who owned The Gray Law Group, in 2017 agreed to be barred from practicing before the PTO amid conflict of interest and fraud allegations stemming from his arrangement with U.S. Patent Commission. Neither Gray nor his attorney responded to Bloomberg Law requests for comment.

Dungee, the Smelloons inventor, settled her class action against Davison for $2.5 million in 2015, 13 years after she made that first call. Davison’s disclosure statement from 2015 said it offered 267,769 agreements to pursue licensing deals for inventors, but only 359 inventors—out of tens of thousands of paying customers—actually signed deals to license their inventions.

And the number of Davison customers who earned more in royalties than they paid: 16.

“You’d be better off buying lottery tickets than paying these folks,” Cross said.