Wallach atop Mount Katahdin at the end of his 19-year quest to complete the Appalachian Trail.
Photo provided by Judge Evan Wallach.

Wallach announced last month that he’s taking senior status after 10 years on the U.S. Court of Appeals for the Federal Circuit. He’s been eligible since 2014 due to his prior service on the Court of International Trade.

Asked about the timing, the Obama nominee’s response to Bloomberg Law was simple: “The election.”

Wallach has worked with judges all over the world, including Pakistan, Mongolia, and Croatia when it was still a dictatorship. “Uniformly what I said was, predictability is the essence of law,” he said in an exclusive interview. “That’s why I found the last four years so disturbing, because things were unpredictable.”

Senior judges can draw their regular salary while reducing their workload to 25% of what active judges do. Wallach says he will shift his workload to presiding over civil trials but will still sit on the Federal Circuit occasionally.

He’ll spend his extra time focusing on his passions: hiking—he completed the Appalachian Trail over 19 years—and studying the law of war, something he began after he returned from Army service in Vietnam.

He feels his Federal Circuit seat will be in good hands if President Joe Biden’s pick, Tiffany Cunningham, is confirmed. “I can’t think of anyone I would rather have replace me,” he said.

Wallach said Cunningham will help diversify the bench and has stellar credentials.

He also talked up her straight A average at MIT and her trial experience.

“That’s one of my pet peeves is people who have no trial experience being up on the appellate bench,” he said. “You have to understand how the trial court works.”

Wallach was a trial attorney for much of his career before overseeing trials on the trade court. “I love trial work. I think it’s great fun,” he said.

He plans to offer his services in senior status to whichever federal trial courts need a hand, but only for bench trials. For cases involving a jury, judges “have to be on good behavior—no facial expressions, no indication that somebody is fibbing,” he said.

That Wallach takes pleasure from interacting one-on-one with attorneys is clear from watching him at Federal Circuit oral arguments, where he presses for details from the record and questions inconsistencies in the briefing.

His oral argument style comes from his time trying cases, he said. He once took on a complex employee benefits case three weeks before trial and worked hard to prepare.

“I knew that record cold, I basically memorized the briefs and the cases, but I had a little cheat sheet too with a summary so I’d know the names,” he said.

“That’s the standard I expect out of lawyers—to do as much work as I did,” he said. Some attorneys at the Federal Circuit are good at it, some are working on it, and some are terrible, he said.

Attorneys arguing patent cases before the court answer questions to his satisfaction “maybe half the time,” he said.

Patent cases, which make up the bulk of the Federal Circuit’s docket, won’t top his list when taking on trials.

“I came to this court knowing nothing about patents,” he said. “But I’m a competent lawyer. I can study something and work at it.”

He did know “a heck of a lot” about the law governing international trade, which is also part of the Federal Circuit’s jurisdiction.

The court had never had any judges with trade experience until President Barack Obama appointed former trade law attorney Judge Jimmie V. Reyna and then, Wallach. Trade attorneys had complained the appeals court’s opinions made clear it didn’t understand the subject matter.

Wallach says he’s proud of the work he and Reyna have done to regularize international trade law in their time on the court. As proof that it’s working, he points to a substantial drop in the number of trade appeals. 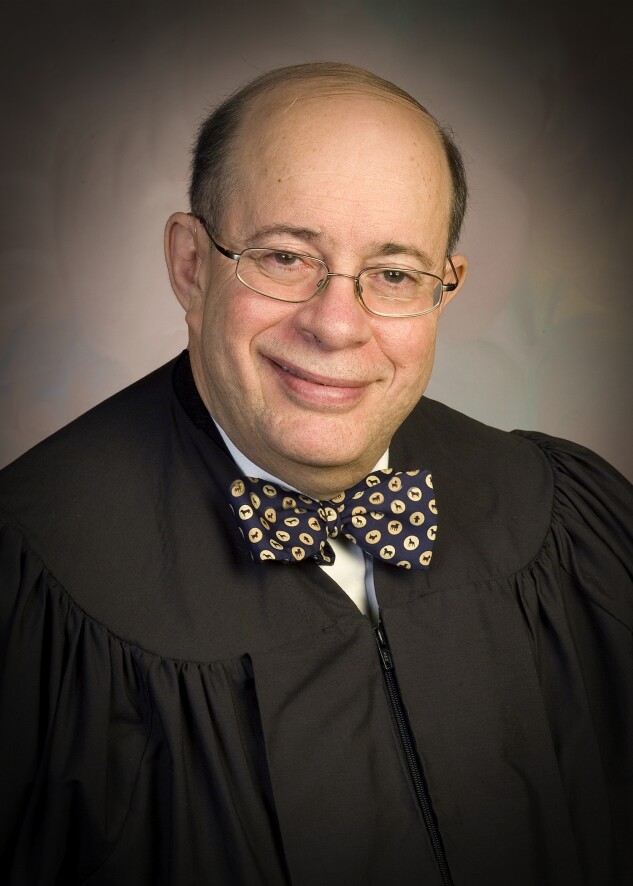 Wallach has written extensively the on the law of war, including articles on who qualifies as a prisoner of war and on waterboarding, arguing that it is a war crime.

With more free time, he said he plans to do more research into how the Americans treated Japanese prisoners after the Battle of Saipan, and whether rape should be considered genocide when it’s used to shatter norms and destroy family units.

He also plans to hike, a passion that led him to walk the entire Appalachian Trail, from Georgia to Maine.

When he completed it in 2017, he became the only sitting active federal judge to have done so, according to the Administrative Office of the Courts, he said.

To make sure no other judges complained about the time he spent on the trail, he made sure that every year he worked harder on case statistics than anybody else, he said.

Wallach’s Court of International Trade portrait shows him surrounded by his three springer spaniels. Harry and Molly are still around, but Charlie has died. He said he and his wife have discussed getting a third dog on long walks during quarantine."We have a doggy paradise,” he said. “A fenced-in acre with a doggie door.”