Taylor Swift is facing another copyright infringement lawsuit over her hit song "Shake It Off."
Photographer: Bryan Bedder/Getty Images

The edit didn’t change the outcome, meaning Swift will still have to return to California district court to argue her hit “Shake It Off” didn’t rip off a 2001 song’s lyric about haters and players. But copyright attorneys find the judges’ actions unusual, saying the remaining two paragraphs don’t provide much clarity on an increasingly important aspect of the law in a circuit home to much of the recording industry.

“They took out the entire analysis. Anything that was giving guidance, they just deleted,” said Michael D. Roth of Boies Schiller Flexner LLP, an appellate attorney with a music industry and copyright background.

The Swift case comes amid a slew of copyright cases that have been rocking the music business, with courts issuing infringement judgments against Katy Perry and a Pharrell-Robin Thicke collaboration in recent years. Led Zeppelin escaped a similar fate—for now.

After a California district court judge found the lyric that Swift allegedly swiped wasn’t original enough to protect, the Ninth Circuit chastised him for deigning himself “the final judge of the worth of an expressive work.” It also quoted a 1903 Supreme Court opinion by Justice Oliver Wendell Holmes, stating the danger of judges deciding artistic value, in Bleistein v. Donaldson Lithographing Co., a case involving advertising images. Holmes’ quote was edited out of the circuit opinion as well.

What remained was one paragraph introducing the case and one outlining the ruling. Excluding the introduction and citations, the decision was two sentences: “The district court dismissed the complaint based on a lack of originality in the pertinent portions of Hall’s work. Even taking into account the matters of which the district court took judicial notice Hall’s complaint still plausibly alleged originality.”

It retained a brief footnote declining to dismiss the case on alternative grounds argued by Swift, including that the phrase isn’t protectable regardless of originality and that the differing lyrics also differ in function. But the three-judge panel, whose initial decision and revision were unsigned, said the district court could consider those arguments on remand. 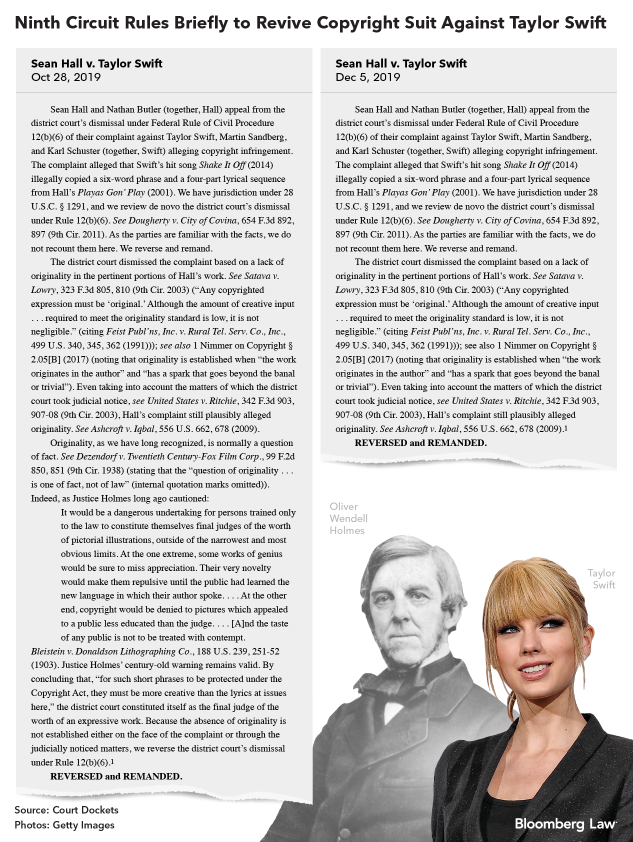 Copyright doesn’t generally protect short phrases, the 2018 decision by District Judge Michael W. Fitzgerald said. He also decided that in writing the 2001 lyrics “Playas, they gonna play / And haters, they gonna hate,” Sean Hall and Nathan Butler were merely “combining two truisms about playas and haters, both well worn notions as of 2001.”

Intellectual property attorneyof Steptoe & Johnson LLP took the deletion as a softening of the decision. She called the deleted material’s emphasis “just so odd” for a non-precedential decision, one that may not be binding but could influence future litigation.

“That’s the kind of language you put in your brief when you’re describing the state of the law and the history,” said Crowther, who has represented large companies on both sides of copyright matters. “It suggested to me the Ninth Circuit was trying to say courts should take a harder look at originality, and by deleting that paragraph I think they’re signaling that’s not the case.”

Counsel for Hall and Butler also read the edit as softening the decision. Marina Bogorad of Gerard Fox Law LLP, while still pleased by the outcome, called the removal of “clear guidance” on originality-based dismissals “unfortunate” in a statement.

Chance to ‘Lay Down the Law’

The court may have removed the paragraphs because the “citation to Bleistein is a little bit out of context,” Wesley Lewis of Haynes and Boone LLP said. Holmes was cautioning courts on judging particular types of work rather than judging individual works, Lewis said.

But Lewis said the circuit’s rebuke, before and after the edit, still passed on an opportunity “to go into detail about what they thought the right approach would be.” Lewis interpreted it as “an exercise in judicial restraint” where they simply made a non-precedential ruling of a specific error without expounding on a broader standard.

“I think this was the Ninth Circuit deliberately not addressing that question,” said Lewis, who often defends media companies in infringement cases. “Maybe they just thought it was not an appropriate time to answer that question.”

The Led Zeppelin case, in which the British rockers are accused of ripping off the opening riff from their classic “Stairway to Heaven” from a group that was once their opening act on tour, is also before the Ninth Circuit. It’s much further along and more fully developed than Swift’s case; a circuit panel voided a jury’s non-infringement verdict and ordered a new trial.

The circuit may use that case to provide the substantial clarity and guidance that the the Swift panel didn’t, Roth said.

“I suspect the Led Zeppelin decision is going to be the one where they really lay out the law,” Roth said.