Taking a broad view is essential when it comes to law firms getting and keeping the patent litigation business of the largest technology companies.

Fish & Richardson PC principal Kurt L. Glitzenstein said a client once put it this way: “We don’t have legal problems, we have problem problems.”

The idea drives Fish’s approach to intellectual property matters, leading the firm to consider not just an individual case but a client’s business, legal, and financial needs, Glitzenstein said.

That approach has landed Fish patent work for both and , which have faced more patent litigation over the past 10 years than any other tech companies, according to a Bloomberg Law analysis of district court litigation involving big tech companies since 2010.

These high-stakes and complex cases account for a large share of litigation tech companies face, and they require firms with experience and technical expertise.

Patent litigation accounts for over 35% of all district court cases Microsoft has faced over the last decade, and 44% of cases filed against Apple, according to Bloomberg Law Litigation Analytics. And these cases come with big price tags—high value patent cases can cost more than $4 million to take to trial, the American Intellectual Property Law Association reports. 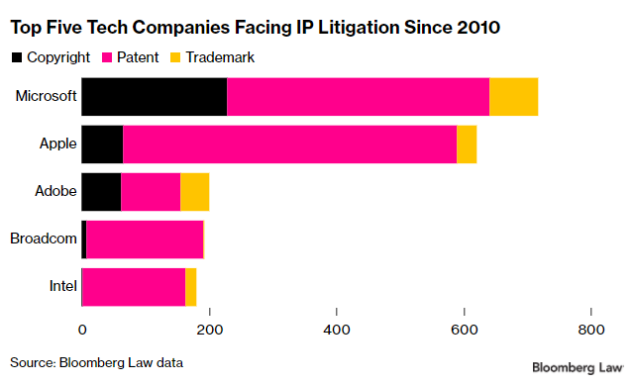 Fish, founded in 1878, is an IP-focused firm with offices in the U.S., Munich, and Shenzhen, China. The firm touts its business-oriented approach as crucial to the success of its nearly three-decade relationship with Microsoft.

“We don’t just see ourselves as helping on the legal side, we see ourselves as counselors for broad business-oriented solutions that help cater to all their needs,” Betty H. Chen, a principal with Fish’s Silicon Valley office, said.

Fish has a team dedicated to monitoring Microsoft’s business side—from financial reports to press releases—that meets every six weeks with all the attorneys working on Microsoft cases to stay on top of what’s going on with the company.

“That has transpired into this long relationship, all based on trust, creativity, flexibility, and a deep understanding of Microsoft,” Chen said. “We know its employees, we know its businesses, we know what Microsoft prioritizes, and we take that into account whenever we’re litigating for them.”

The approach has led to some big wins for Microsoft over the years. Fish got over $2 billion in jury verdicts against Microsoft overturned after a seven-year battle with over digital compression patents. And it helped persuade the U.S. Court of Appeals for the Federal Circuit to throw out the 25% rule, which plaintiffs’ experts relied on as the starting royalty rate for damages calculations, in a case against Uniloc. 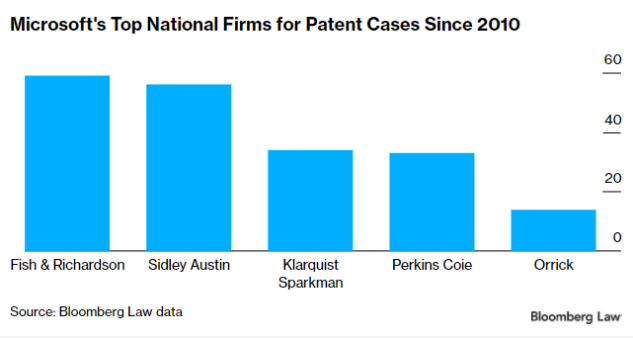 The firm’s IP focus also has made it a magnet for attorneys with the trifecta of technical, industry, and legal expertise.

The firm has over 100 Ph.D.s among its 400 attorneys and technology specialists, and many had technical careers before becoming attorneys, Glitzenstein, who leads the firm’s litigation practice group in its Boston office, said.

“That’s one of the things that really does separate us from other firms,” he said.

This “seamless service offering” means clients don’t have to worry about two different firms making different positions at the patent office and during litigation, he said. “That’s critical.” 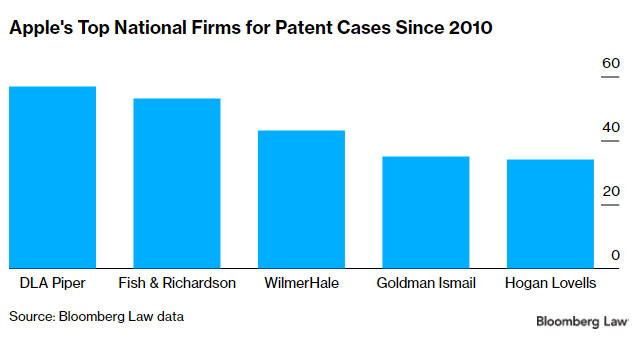 Sidley’s IP department and Microsoft’s legal team have grown together since their relationship started in 1996, Cederoth said.

“We have developed, established, and maintained a rapport and knowledge of the company, so we work well with their internal folks,” he said. “We know the organization and the structure.”

Having a large firm with offices all over the country and experienced litigators in other disciplines also has made Sidley a good fit for Microsoft.

Sidley attorneys in its different offices know their courts and local bars. Its record-winning cases at trial and the strength of its appellate practice makes the firm a complete package, he said.

Microsoft is particularly passionate about diversity, pushing for it before other companies made it a real priority, Chen and Cederoth noted.

It offers bonuses to law firm partners for meeting diversity goals, such as having a diverse team on each case and making sure those diverse attorneys are given real responsibility, Chen said.

She said Fish recently pitched a team it thought would be a good fit for a case filed against Microsoft. On the first team call, the Fish attorneys and their Microsoft counterparts realized the group was made up completely of women and minority attorneys.

“That specific makeup wasn’t even conscious. It has just become our fabric of life here, due in large part to Microsoft’s diversity program,” she said.

Cederoth said Microsoft’s commitment to diversity has helped reinforced his firm’s own efforts. It’s had an impact on staffing, hiring, and promotion. Sidley has made a particular effort to boost women lawyers, promising to have a woman argue or second chair all of its cases for Microsoft, he said.