Six Federal Circuit decisions on patent damages this year show the importance of details in cases involving issues such as marking, interest accrual, and awards calculation.

The decisions show “how important small things can be,” said Tom Cotter, intellectual property professor at the University of Minnesota Law School who blogs about patent remedies.

The marking cases, for instance, are “probably rather obscure even to many people in the IP world,” Cotter said. But patent owners limit their damages if they don’t comply with the statute’s technicalities, he said in an email.

The U.S. Court of Appeals for the Federal Circuit has a clear rule to apply on marking. “In those cases, you’re seeing some pretty harsh outcomes for patent owners on pre-suit damages,” said Mel Bostwick, partner at Orrick, Herrington & Sutcliffe LLP in Washington.

But in the other damages cases from this year, which are governed by more “squishy” standards, the court “is far more reluctant to undo a damages award,” she said in an email. “The jury’s ultimate number can be really hard to undo.”

The marking statute provides patent owners the right to obtain damages for infringement before they sue if they alert would-be infringers by marking their products as patent-protected. Otherwise, they may only collect damages from the time the infringer received actual notice through the lawsuit.

Packet Intelligence sued NetScout Systems for willfully infringing its patents related to transmitting information over a computer network. The Federal Circuit upheld the jury’s infringement verdict, but eliminated the portion of the $5.75 million award accounting for damages that occurred before the suit was filed based on inadequate marking.

These cases “reinforce the importance of marking to obtain full damages,” Dmitry Karshtedt, patent professor at the George Washington University School of Law, said in an email.

In two other recent decisions, the court is “essentially saying that you don’t always need to look at the value of the precise property that was infringed in assessing damages,” Bostwick said.

The Federal Circuit’s August decision in Bio-Rad Laboratories v. 10X Genomics affirmed the entire $24 million damages award based on one of three patents, even though it told the lower court to reassess infringement of the other two.

“The jury verdict and jury instructions show that the damages award is not predicated on infringement of any one patent,” the Federal Circuit said.

The April decision in Hologic v. Minerva Surgical is primarily about assignor estoppel, but the court affirmed the damages award of over $5 million under similar circumstances to Bio-Rad.

The jury didn’t apportion damages between two patents—one of which was subsequently invalidated. The whole award stands because the accused activity necessarily infringed the valid patent claim, the court said.

The rulings are “tough to square with the baseline idea that a reasonable royalty should be limited to that value,” Bostwick said. As a result, accused infringers may try to get evidence of the independent value of each asserted patent into the record, but they run the risk of an ultimate damages award that’s much higher than it otherwise would have been, she said.

“That’s the tightrope accused infringers will have to walk,” Bostwick said. 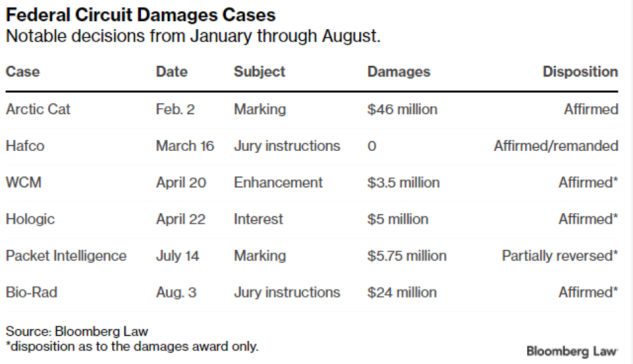 The Federal Circuit’s March Hafco decision affirmed an infringement judgment in favor of the owner of a design patent on mining equipment and sent the case back for further proceedings on damages.

The jury found GMS willfully infringed and awarded Hafco $124,000 in damages based on sales of infringing products. The judge entered a permanent injunction but reduced the damages award to zero because it shouldn’t have been based on infringing sales.

In Bio-Rad and Hologic, the damages weren’t reduced because there weren’t appropriate jury instructions or separate arguments below by the defendants about how much of the award rested on a particular patent, Karshtedt said.

Hafco might have been able to avoid a remand and just get the original damages lowered on appeal if it had cross-appealed on damages, he said. This is what Judge Pauline Newman suggested in a concurring opinion—that the Federal Circuit should just reduce the award to $110,000, representing the profits Hafco lost while the infringing machine was on the market.

Cotter points to Hafco as another case based on a technicality.

“Hafco involves the question of whether the court can simply correct an obvious jury error in calculating damages (apparently not), which again arguably shows the importance to the Federal Circuit of being a stickler for the rules and, where possible, of deferring to the jury,” he said.

The trial court properly supported its decision to enhance the $1.4 million jury award by a 2.5 multiplier because the infringement was willful, the Federal Circuit found. The jury’s award was based on a royalty rate of $1 for each of the 1.4 million infringing units sold.

But the Federal Circuit reduced the amount of interest IPS owes by moving up the date it should start to accrue.

Figuring out the correct date for accrual of post-judgment interest “seems pretty obscure,” Cotter said, “but can have major consequences if the principal on which interest is being calculated is large.”

WCM and Packet Intelligence together “reflect a trend toward deference to district courts on both the finding of willfulness and on the amount of enhancement,” Karshtedt said.

To contact the editor responsible for this story: at jhughes@bloombergindustry.com; at kperine@bloomberglaw.com