Courts around the country have turned to remote arguments after the coronavirus outbreak and attorneys are learning to adjust to logistical challenges.
Photographer: David Paul Morris/Bloomberg

Attorneys, kept away from courtrooms nationwide, are adjusting on the fly.

Courts across the country have ordered oral arguments to be conducted remotely because of the coronavirus outbreak, using video, phone conferencing, and other technologies. With so much more at stake than during a routine staff meeting, attorneys are anxious about arguing from their home offices.

In the midst of logistical challenges, attorneys are discovering new workarounds and other tricks to keep up with litigation demands that continue unabated. They are simulating courtroom settings, developing newfound appreciation for colleagues who can slip you notes, and brainstorming to minimize little hiccups—like pixelated video and rustling paper sounds.

“I think the courts could sustain this for a while if necessary,” Fish & Richardson associate Nitika Gupta Fiorella said. “I don’t think it’s the first choice for many of the judges or the litigants, but it’s certainly something that’s a necessity right now.”

Attorneys are mindful about not deviating too far from tried-and-true routines for argument preparations.

“I actually treated it as if I was there in-person,” said Fiorella.

Fiorella also made sure the cell phone signal was strong at her Delaware home and practiced the argument with colleagues in a phone moot court.

Standing and treating the argument as if she were there in-person helped her get in the right frame of mind and kept her from reading directly from her notes. While she kept papers in front of her, Fiorella said she tried to condense that information just like she would for an in-person presentation.

“Arguments are supposed to be discussions with the judges and you want to be listening to what the judges want you to answer and what they think the pressure-points are in the case,” Fiorella said. 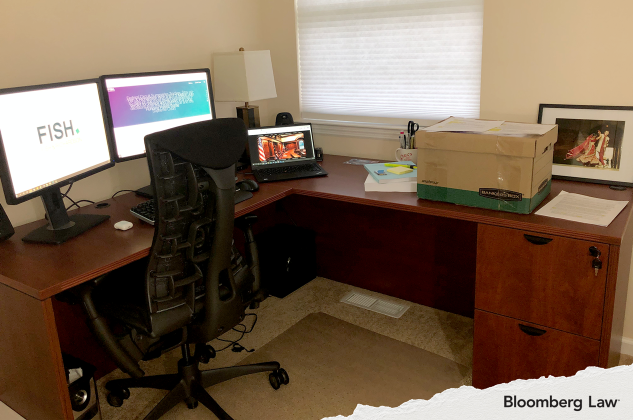 William Jay, an appellate lawyer at Goodwin Procter, also stood when it was his turn to speak during a recent Federal Circuit hearing done over the phone, according to a recent LinkedIn post he wrote about the experience. Borrowing a tip from another attorney, Jay covered his desk with towels to minimize the rattling of papers.

Preparing for a remote argument through a phone moot court could be helpful, Charles Rothfeld, an appellate lawyer at Mayer Brown, said. “The more practice you have with anything, the more ease you get doing it,” he said.

King & Spalding associate Jonathan Weinberg even sought a total change of scenery in pursuit of a realistic setting. He had a remote argument before the Federal Circuit on April 7. But with three children and a dog, the lawyer decided to get away from his home office and relocate to a moot court room that had been set up in his firm’s office. The room just so happened to overlook the Federal Circuit in Washington.

“It was important for me to make it as formal and as close as possible,” Weinberg said.

In-home distractions require constant vigilance while attorneys try to simulate work settings, even as they enjoy spending more time with their families.

Stroock & Stroock & Lavan partner Brian Frontino had an argument scheduled at the Eleventh Circuit last month, but agreed with opposing counsel to let the appeals court rule on the briefs. He worried about possible distractions at his Florida home with two children, including one kindergartner, trying to argue the case over the phone.

“I did have some anxiety about how that was going to work logistically and how it would go,” he said.

Technical glitches, though mostly minor and merely cumbersome, have been a constant presence.

During a hearing at a U.S. Patent and Trademark Office tribunal, Sterne Kessler Goldstein & Fox attorney Robert Sokohl had to call a few different numbers because of a connection issue. One judge’s camera feed froze during the virtual hearing, he said, and another became pixelated on video.

Two judges at the D.C. Circuit, recently listening to a remote oral argument about short-term health plans, also experienced technical difficulties, according to Rothfeld, who participated in it.

Judge Judith Rogers’ microphone cut out during her questioning, and Judge Thomas Griffith was dropped from the call for several minutes.

Courts generally have been accommodating to the extent possible, attorneys say. The Federal Circuit provided instructions for Weinberg’s call beforehand, he said.

Despite a few awkward pauses, the method was effective, said Weinberg, who represented an aviation services company in a patent infringement dispute.

“Even though it’s not quite as effective as being in person, I do think judges get a lot of benefit from holding those arguments,” Weinberg said. 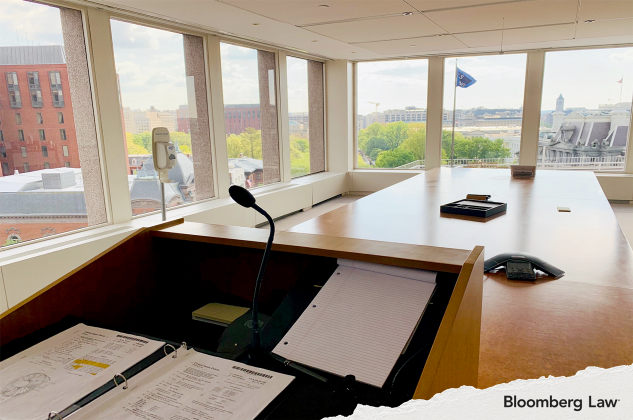 Technology can’t hide the fact that remote hearings are rife with the inconveniences stemming from the lack of judges and peers’ physical presence.

Not being able to see the judges and their reactions makes for a “somewhat more disconnected and disjointed argument,” Rothfeld said. Judges didn’t know when someone would be asking a question, he said.

Figuring out when the judges were done speaking was also unclear, Rothfeld said.

Robert Asher, a patent attorney at Sunstein LLP, said he missed having a colleague next to him who could “slip me notes” during a recent hearing at the Patent and Appeal Board.

Arguing virtually can be a “little bit of a colder experience,” Sokohl said. “You lose that closeness you have to people when you’re in the same room,” he said.

Despite the adjustments, lawyers say there have been some perks to remote argument. Normally lawyers would carry all their materials to court and have a limited amount of time to arrange them to their liking. But Rothfeld conducted his argument sitting in his home office with his papers laid out in front of him.

“In some ways, for the lawyers, it’s easier to set up because you have all the time in the world to prepare,” Rothfeld said.

—With assistance from Kyle Jahner

To contact the editors responsible for this story: at ryu@bloombeglaw.com; at kperine@bloomberglaw.com