Fewer challenges to patents listed in the FDA’s Orange Book of approved drug products are being launched at the U.S. Patent and Trademark Office, as generic drug companies refine their strategies against brand-name manufacturers.

Patents in the Food and Drug Administration’s Orange Book are extremely valuable because they protect brand name drug products from generic competition.

Generic drug makers have become more selective about which patents they target for challenge in the agency’s Patent Trial and Appeal Board’s inter partes review program, attorneys say. The reviews haven’t turned out to be an easy method to attack drug patents as some initially thought, forcing companies to carefully plot their approach to getting generic products on the shelves.

Fewer than 20 challenges to Orange Book-listed patents were filed at the PTAB in the year ending with September 2020, an 85% drop from the same period five years before, an analysis of U.S. Patent and Trademark Office data shows. 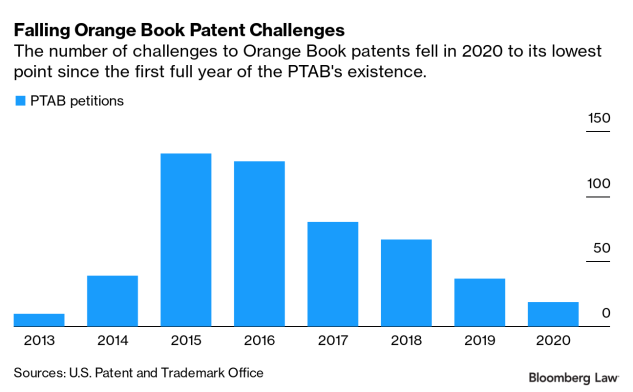 “We didn’t get a real feel for what they were going to invalidate or not up front,” Venable LLP attorney Ha Kung Wong said. “We thought ‘death squad, they’re going to kill everything,’ and IPRs went through the roof.”

Now, companies have “better insight into what the PTAB is going to do,” Wong said.

A case at the U.S. Court of Appeals for the Federal Circuit could force generics to further revisit their approach. The court this month will hear arguments in ’s challenge to a first-of-its-kind PTAB decision that applied a recent, much-debated rule and exercised its discretion to deny review.

The rule authorizes judges at the PTAB to deny review based on the state of a parallel infringement case.

Challenges to Orange Book-listed patents at PTAB peaked in fiscal year 2015 with over 130 petitions, according to PTO data. Early decisions in the first few years after the PTAB began operating in 2012 fueled optimism for challenges across technologies. Critics dubbed the board a “death squad” for patents.

It wasn’t just generic companies getting in the mix when it came to drug patents. More than 30 petitions were filed by a group affiliated with Kyle Bass, a hedge fund manager who shorted the stocks of drug companies whose patents he challenged.

But some of the enthusiasm eventually started to fade. Various court decisions and rules changes at the board, including precedent discouraging multiple challenges to the same patent, made validity challenges more difficult. In recent years, the board has decided to review challenged patents less often.

“If the odds of success are decreased, that’s going to disincentive petitioners from filing,” Harness Dickey & Pierce PLC attorney Douglas Robinson said. “There’s going to be some marginal group of petitioners that won’t file that would have filed had the rules been like they were in 2014.”

The coronavirus pandemic likely played a role in the number of drug patent challenges in 2020. Pharmaceutical companies focused their attention on solving the health pandemic, and lawsuits against generic drug companies —the starting point for many PTAB challenges — took a dive.

“It was a ‘drop everything you’re doing’ kind of moment,” said Jonathan Roses, an attorney at Wolf, Greenfield & Sacks PC. “I don’t think it left a lot of room for generic development.”

But companies also have become more strategic about which patents to target. PTAB decisions addressing the initial burst of filings helped paint a picture about the kind of drug patents likely to survive review—and those that may be more susceptible to challenge.

A June 2018 study from attorneys at Ropes & Gray LLP, for example, found patents covering an active pharmaceutical ingredient were the strongest in PTAB reviews. There weren’t any examples of the PTAB invalidating all the challenged claims of this kind of patent, the study said.

Patents covering methods of treating patients were the most vulnerable to challenge, the study found. A quarter of the petitions challenging those patents ended with none of the disputed claims surviving review.

Patent challengers have responded, attorneys said. Rather than sink money into an uphill battle at the PTAB, companies appear to be focusing the fight on hard-to-kill patents in the district court, where they have a broader array of challenges at their disposal as compared to IPR.

“Parties have learned from the PTAB’s past decisions,” Wong said. “They now know what types of patents they want to target, they’re being more selective.”

A PTAB decision in September threw another factor into the mix. The board denied Mylan’s request to review a patent covering schizophrenia treatment Invega Sustenna, applying its NHK-Fintiv rule. The rule is the result of two PTAB decisions designated precedential in 2019 and 2020.

The rule, which has come under fire from tech companies, outlines a series of factors that judges use to decide whether to deny review based on the state of a parallel infringement case. The rule hadn’t before been applied in an Orange Book patent case.

The board, in its decision, took note of a fast-approaching bench trial in a case Janssen filed against over the same patent. The trial began in October in New Jersey district court. No trial date has been set in a separate case against Mylan.

PTAB decisions about whether to review a patent generally can’t be appealed, but Mylan argues that by “tying” its rights to Teva, the board violated its due process. It says this is the kind of “shenanigans” the U.S. Supreme Court has said the Federal Circuit can review.

The appeals court has scheduled an argument for Feb. 12.

If the board’s decision stands, generic makers that want to attack patents at the PTAB will need to move fast when there’s a dispute.

“You risk being denied if you don’t file until well into the litigation,” Dechert LLP partner Katherine A. Helm said. “That could put the generic in the position of having to decide if they’re going to file before a litigation starts.”

That runs counter to the usual approach, which is to file once the litigation has begun.

There are various reasons for waiting to bring a PTAB challenge, including wanting to use IPRs as a mechanism to put pressure on a brand company in a lawsuit. There can also be concerns about not wanting to clear the patent landscape for another generic maker who might be ahead in the race to market, attorneys said.

For those that wait, the possibility of discretionary denial is “another factor that I think petitioners are going to look at and wonder whether there is value in the investment in putting a petition forward,” Dechert attorney Blaine Hackman said.