Artists Brandalizm works on a collaborative Black Lives Matter piece with other artists that spells out the word, "Unified," inside Graffiti Alley in Boston on June 15, 2020.
Photo by Jessica Rinaldi/The Boston Globe via Getty Images

Anti-racist messages, murals of Black people killed by police officers, and other pieces of protest art created on buildings and streets from New York to Ferguson, Mo., since George Floyd’s death have attracted worldwide attention.

But how long those works stay visible may depend on interpretations of a rarely tested part of copyright law that might be headed for U.S. Supreme Court review. Although the Visual Artists Rights Act of 1990 doesn’t give artists free rein to create artwork on private property, it could protect prominent pieces of art made during the protests regardless of traditional property rights.

VARA gives artists “moral rights” in their works during their lifetimes. One of these rights protects visual art of “recognized stature” from being destroyed without the artist’s permission.

The scant law on the topic doesn’t settle what recognized stature is, though. The few decisions pertaining to VARA put the onus on the courts to determine which works are protectable while avoiding what former Supreme Court Justice Oliver Wendell Holmes Jr. called the “dangerous undertaking” of judges deciding artistic worth. 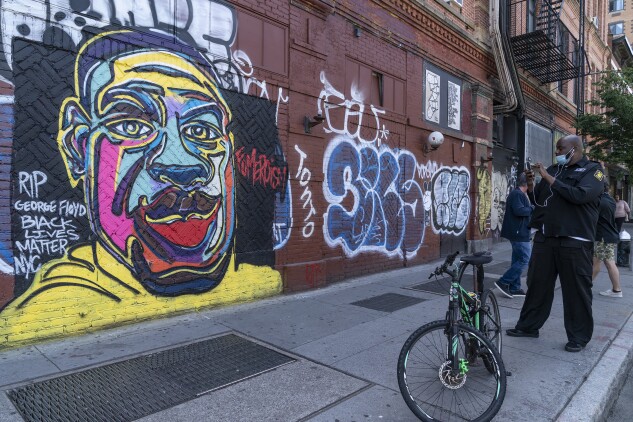 On a corner of Houston street and Bowery in New York a man takes a photo of a mural of George Floyd who was killed by a police officer.
Photo by Lev Radin/Pacific Press/LightRocket via Getty Images

“We don’t have a lot of precedent to draw upon, and cases addressing the standard have been somewhat inconsistent, resulting in confusion,” said Megan E. Noh, a partner at Pryor Cashman LLP and co-chair of its Art Law group in New York.

Caleb L. Green, an attorney at Dickinson Wright PLLC in Las Vegas, said VARA provides an “interesting tool” for protest artists to try to “use intellectual property as a weapon against social injustice.”

Still, a number of limitations exist. Courts have implied that art that can’t be removed from another person’s property without possible damage isn’t protected if it was created without permission. Works made for hire can’t be protected. And only the artists themselves can assert VARA rights.

A February ruling by the U.S. Court of Appeals for the Second Circuit offers clues about when and how the law could apply to protest art, while leaving many questions.

In Castillo v. G&M Realty, the Second Circuit affirmed a $6.75 million VARA award for aerosol artists after a property owner whitewashed their works from New York’s 5Pointz art space. The works were professionally curated and had been placed with the property owner’s permission.

The court defined a work of recognized stature as “one of high quality, status, or caliber that has been acknowledged as such by a relevant community,” and said street art could have such stature even if it’s temporary. The case was stayed in May for the property owner to appeal to the Supreme Court.

In finding that most of the 5Pointz works had recognized stature, the lower court noted that they’d been recognized in films, news articles, and social media, among other places. It also credited expert testimony about the works’ craftsmanship, the importance of 5Pointz as a mecca for aerosol art, and the art world’s interest in the site.

All of that potentially could be relevant to whether art from Black Lives Matter protests has VARA stature, said Kate Lucas, a lawyer at Grossman LLP, a Manhattan boutique firm with expertise in art law.

But courts, including the Second Circuit, haven’t yet come up with a “neat and tidy” test for making that determination, she said, in contrast to concrete multi-factor tests that apply in some other parts of copyright law.

How and when VARA applies to protest art will depend on fact-intensive, case-by-case analyses, and not all of it “would stand or fall as a monolithic category of art,” Lucas said.

The Second Circuit said the “relevant community” to determine stature would typically include fellow artists, historians, critics, and curators, but also noted recognition by the general public.

This was echoed in a 2019 Copyright Office report, which said a definition of recognized stature that “accounts for the opinions of those beyond the academic community coincides with congressional intent to extend VARA protection to a greater range of artistic works.”

“The relevant community is going to vary depending on the art,” Noh said. “If we are thinking about community in terms of the geographic location of the intended audience, some art has a highly local community, and some is appreciated globally.” For example, Noh said a mural located in a small town could be of “huge significance to people in that community,” but “may not be on the radar of worldwide art critics.”

Noh also noted that the internet—and social media platforms like Instagram in particular—can create a “more fertile environment for works to be recognized” by making it easier for a relevant community to see them, especially considering that the art world has been operating mostly online during the Covid-19 pandemic.

“It’s not impossible to imagine a mural painted in the context of the Black Lives Matter protests achieving recognized stature—potentially even relatively quickly, given the inherent ability of art to effectively communicate powerful political messages combined with the incredible reach of social media at this unique moment,” Noh said.

Another pivotal and little-addressed question for the VARA analysis of protest art is whether the artist had permission from the property owner to place the work—though even without it, the statute’s protections still might apply.

Under VARA, when a piece of art can be removed without being damaged, modified or destroyed, property owners must give an artist 90 days to remove it, and can then do it themselves if the artist doesn’t. Courts have implied that this protection could also apply to a removable work even if it wasn’t authorized. This could be relevant to murals on plywood on shuttered storefronts, or decorated temporary barricades.

At least one court has held that VARA doesn’t protect unauthorized works that can’t be removed without being damaged or destroyed. But the situation becomes more complicated if an authorized piece of art can’t be safely removed and the parties haven’t agreed on what to do with it.

Noh noted that parties can pursue creative solutions to this issue such as a fixed term of display, high-quality archival images of the work, or additional compensation for the artist.

All of this assumes that the artist’s identity is known. But protest art is often anonymous, and VARA rights can only be asserted by the artists themselves.

“5Pointz was really unusual in that there was a real curation of the site and they knew who every artist was, but that may not be the case in many situations involving street art,” Lucas said.

VARA doesn’t address what happens when an artist is unidentified. It does say that property owners must make good-faith efforts to contact artists before removing their works. One practical course of action for a property owner when the artist can’t be identified, if the artwork is removable, may be to post a public notice and give someone time to claim it.

A clear resolution of these issues may not be on the horizon. The few VARA suits that have been brought tend to settle, and many artists might not even be aware of their rights.

And although the property owner who lost in the Second Circuit has vowed to appeal, the Supreme Court takes few cases and generally prefers to let unresolved issues percolate among circuits until a number of rulings, preferably contradictory, arise.

It also “takes an unusual type of artist with lots of time and legal fees to be a plaintiff in a test case in an untested area of copyright law,” Lucas said. And defendants might be inclined to settle to “avoid being the defendant that a judge decides to make an example of.”