The concept of patent pools as a means to address a health crisis has been revived, but there are challenges.
Photographer: Oliver Bunic/Bloomberg

As the SARS virus spread around the world in the early 2000’s, researchers agreed to pool their patent rights to help find vaccines and treatments. Only sorting out the details took so much time that the outbreak was contained before the project could be finished.

The concept of patent pools as a means to address a health crisis has been revived as a way to bring together companies, universities, and others to speed development of Covid-19 treatments and medical products.

But the SARS project highlights some of the challenges in creating patent pools to address a pandemic, legal scholars say. Sharing rights to what may end up being blockbuster medicines is a difficult ask and can be slow-moving, with thorny legal questions about which patents to include and how the pool will be structured.

“That costs money and it takes time, it takes organization,” said Jorge Contreras, a law professor at the University of Utah. “So they’re not great mechanisms when you’ve got to move fast.”

The drug industry says the response to the coronavirus pandemic from governments and private companies has been unprecedented. Researchers are sharing their work, while companies like Sanofi and GlaxoSmithKline team up to develop a vaccine.

AstraZeneca and Oxford University announced their own collaboration last week.

“What the pandemic did was it galvanized all these different entities to look at a very specific medical problem that arose with incredible urgency and became an acute problem for the entire world,” said Stephen Maebius, an intellectual property lawyer with Foley & Lardner LLP in Washington.

Costa Rica in March proposed the idea of a voluntary pool that would collect patents, test data, and other information from around the world. The idea has been supported by governments like the Netherlands, and groups like Knowledge Ecology International and Public Citizen.

Tedros Adhanom Ghebreyesus, director general of the World Health Organization, suggested a pool could be part of the WHO’s effort to accelerate the development of Covid-19 tests, treatments, and vaccines, telling Costa Rica’s president in April that “this is part of what we are doing now.”

The shape of the pool is unclear. Formal patent pools can be a one-stop-shop, collecting different patents that are necessary to sell a particular product, bundling them together, and licensing them as a group. Entities that contribute patents to the pool generally split up the profits.

The concept is familiar in the consumer electronics industry, where pools have been set up for DVD, MPEG, and similar technologies. It hasn’t been as common in the biotech and pharmaceutical space, with so much money at stake. There can also be less of a need to join intellectual property when companies, universities, and researchers are working on different projects. 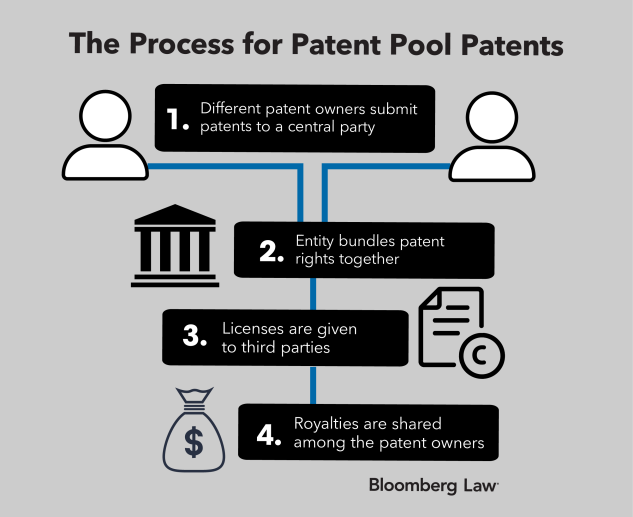 Patent pools allow licensees to get necessary patents in one place.

During the SARS outbreak, which sickened more than 8,000 people in 2002 and 2003, researchers at different institutions, including the British Columbia Cancer Agency and Hong Kong University, were involved in sequencing the virus, according to a WHO bulletin. That led to concerns that patent rights would be split among various groups.

While there was an agreement to a patent pool to help resolve those concerns, it took time to put together.

One factor patent pools need to address is antitrust regulations, which require that pooled technologies complement one another, not be competing substitutes. Organizers had to decide which patents would be included in the pool, how it would be structured, and the terms of a license.

“Because a business review was not requested and the proposed structure has not been ruled upon by the United States Department of Justice, whether the pool would have been successful remains inconclusive,” lawyer and law professor Dana Beldiman wrote in a 2012 research article.

That is seen as a missed opportunity by some, who say it would’ve been valuable to continue those conversations. Much of the existing antitrust guidance for patent pools is focused on standard-setting organizations in computer, electronics, and telecommunications industries, scholars said.

“I do think it’s unfortunate that the things that should’ve been on people’s radar 10 years ago weren’t really fleshed out,” said Hillary Greene , a University of Connecticut law professor and former former project director for intellectual property at the Federal Trade Commission’s Office of General Counsel.

A Covid-19 pool could be modeled after the Medicines Patent Pool, a United Nations-backed organization created in 2010 to increase access to medicines that treat things like HIV, Hepatitis C, and tuberculosis. MPP has offered to assist the WHO in battling Covid-19.

The MPP doesn’t operate like a formal patent pool and wouldn’t raise the same antitrust issues, scholars said. It acts more as a clearinghouse, negotiating licenses from drug companies or universities, and then making deals with generic-drug producers to distribute low-cost copies in developing countries like Afghanistan and Bangladesh.

The system has produced results, and numerous products have been licensed to MPP. But Contreras said there could be challenges when it comes to a Covid-19 treatment or vaccine, which could be a multi-billion-dollar product, especially outside the developing world.

“The economics are really different when you’re talking about Europe or North America,” Contreras said. Negotiating those deals, he said, “is going to be a lot harder.”

Drug makers could feel pressure, as countries like Canada and Germany have taken steps to make it easier to compel companies to license their intellectual property. AbbVie recently opened access to Kaletra, a drug tested to treat Covid-19, after Israel issued compulsory licenses. Pools could be seen by drug makers as a better alternative.

“If I were a drug company I would say, ‘let’s talk to these pool people,” said Ellen ‘t Hoen, director of the legal research group Medicines Law & Policy and former executive director of the MPP.