The battle could add to sparse case law around termination rights language in the Copyright Act
Photographer: Cliff Welch/Icon Sportswire via Getty Images

A battle over the Philadelphia Phillies’ mascot highlights a copyright law provision allowing creators to reclaim their rights several decades after signing them away.

The team is battling with Harrison/Erickson Inc., which sold the rights to the Phillie Phanatic costume in 1978 and renegotiated its deal in 1984. Harrison/Erickson initiated a reclaim bid under a Copyright Act provision that allows creators to reacquire their creations 35 years after inception regardless of prior contracts.

The fight could add to sparse case law around the termination rights language, which took effect in 1978. The Phillies—who unveiled a redesigned Phanatic costume Feb. 23—argue the provision doesn’t apply to their 1984 agreement because it was a renegotiation of the earlier pact.

Copyrights with values that skyrocketed after being sold are rare, and artists have only been able to claw back rights since 2013. That leaves little case law interpreting the provision.

After noting its success and requesting renegotiation, Harrison/Erickson in 1984 it signed away all rights to the Phillies, “everywhere and forever,” for $215,000.

Harrison/Erickson notified the Phillies that it intended to invoke the Copyright Act provision that said that creators could terminate agreements 35 years after execution, except in the case of works for hire. The Phillies sued in the U.S. District Court for the Southern District of New York in August 2019, seeking a declaration that the creators can’t claw back rights. 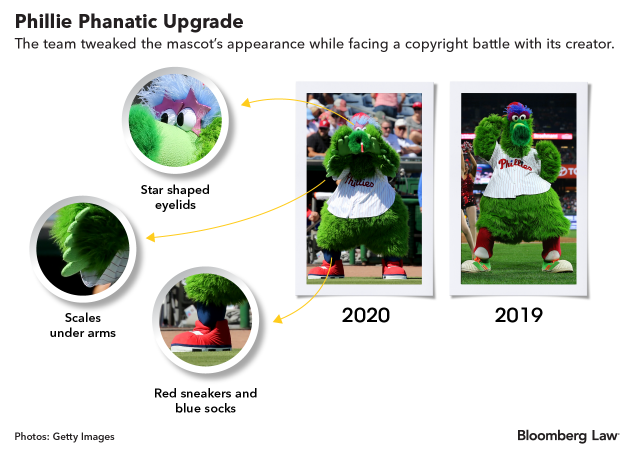 The Phillies made several minor changes to its Phanatic costume that left the core concept—a string-furred green creature with a Phillies jersey, robust beltline and conic horn for a nose—intact.

The team appears to be trying to add a layer to its lawsuit argument that Harrison/Erickson didn’t create the Phanatic alone, but that the franchise co-authored it through various contributions, Josh Gerben, an intellectual property attorney at the Gerben Law Firm, said.

“To me, it’s surprising that the Phillies had to take the step of even having to amend the costume, and that a deal couldn’t be reached,” Gerben said. “It tells me the Phillies feel there’s a weakness to their case.”

Phanatic creators Bonnie Erickson and Wayde Harrison called the new Phanatic “an affront to our intellectual property rights and to Phillies fans everywhere,” in a statement Tuesday. They cited as “disappointing” the Phillies “lack of good faith” in copyright extension negotiations after decades of working together.

“The ‘business decision’ by the Phillies to roll out this ‘new’ Phanatic is a transparent attempt to deny us our rights under the Copyright Act. We would love to have the real Phanatic continue with the Phillies,” the designers said.

The Phillies claim in their lawsuit that Harrison/Erickson can’t terminate the agreement because the provision “does not provide authors with multiple opportunities to renegotiate grants of copyrights after they have full knowledge of the market value of the works at issue.”

The team is also arguing that Harrison/Erickson’s registration is void because it defrauded the Copyright Office by claiming the work as an “artistic sculpture” rather than a costume.

Scafidi said the co-authorship argument “might have had a leg to stand on” if the team claimed it before now. She also said the team’s claim that the Copyright Office would have rejected an application for a costume flies in the face of a 2017 Supreme Court decision. In Star Athletica, L.L.C., Petitioner vs. Varsity Brands Inc. the high court validated costumes—in that case cheerleader uniforms—as copyright-protectable.

The Copyright Act itself undercuts the team’s claim that Harrison/Erickson couldn’t reclaim its rights after a renegotiation, intellectual property attorney Owen Sloane of Eisner LLP said. Any assignment, including renegotiated ones, could increase in value after the fact, he said.

“It seems pretty clear in the statute that a new assignment starts a new grant,” Sloane said.

Attorneys said the problem could have been avoided, and that the dispute offers guidance for any teams creating new mascots.

Copyright attorneys said they doubt the team can separate the new and old costumes as different creations, given their similarities. Copyright holders retain the rights to derivative works, and the Phillies didn’t transform the medium or function of the original expression, the attorneys said.

If so, that leaves the two sides stuck in the termination rights fight. If Harrison/Erickson prevails, the sides would have to return to their “intense negotiations,” Scafidi said. The Phillies would be barred from using a beloved mascot, and the creators likely couldn’t find buyers with the motivation or resources of the Phillies, who’d still own Phanatic trademarks.

“All of this is just a bad chess game on a baseball field,” Scafidi said.