Administrative patent challenges fell last year to the lowest number in several years, a drop practitioners say is the result of fewer infringement suits, a handful of appeals court rulings, and changes to how the Patent and Trademark Office handles review bids.

Petitioners filed 1,321 validity challenges at the agency’s Patent Trial and Appeal Board in 2019, the lowest number since 2013—the first full year of the board’s existence—and a 23% drop from 2018, according to a Bloomberg Law analysis of patent office data.

“Lawyers and clients are stepping back and thinking harder about ‘do I really want to take on this task?’” Brenton Babcock, a Womble Bond Dickinson partner who represents technology companies in patent disputes, said about validity challenges at the board.

Attorneys attribute the decline to a mix of factors, including a steady reduction in patent infringement lawsuits in federal courts, which typically spark PTAB challenges by the party being sued. The number of infringement and patent-related cases filed in U.S. district courts plummeted from more than 6,300 in 2013 to just over 3,600 in 2018 and fewer than 3,550 in 2019, Bloomberg Law data show, amid changes in the litigation landscape that made patent enforcement more uncertain, including Supreme Court decisions that sowed confusion about patent eligibility.

Another factor is the U.S. Supreme Court’s 2018 ruling in SAS Institute v. Iancu, which created an all-or-nothing rule for PTAB reviews of patent claims. Attorneys say that requirement can make validity challenges more difficult. The patent office in 2018 also began making changes to the PTAB’s rules that attorneys say favor patent owners, including revising its standard for interpreting patent terms and clamping down on repeat challenges of the same patent. 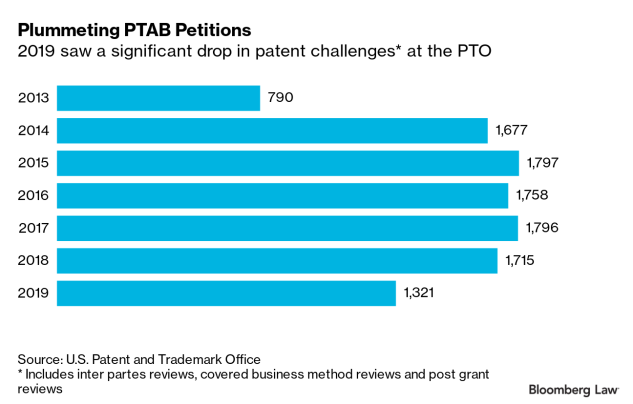 In the first fiscal year of the PTAB, the board accepted 87% of petitioners’ requests to review a patent’s validity. By 2019, institution rates hovered around 60%, as PTAB and practitioner strategies continued to evolve, patent office data shows. The board is also invalidating all challenged claims at a lower rate.

Losing a PTAB challenge makes it more difficult for an alleged infringer to convince a jury that a patent is defective, Covington & Burling LLP attorney Scott Kamholz said. The patent owner can point to the PTAB’s stamp of approval to show the patent’s validity and press for an infringement verdict.

“That all makes petitions risky and a little less attractive than they used to be, so that overall the PTAB doesn’t appear as desirable a venue for challengers as it once did,” Kamholz, a former PTAB judge who now works with clients in the life sciences sector, said.

Attorneys also point to changes enacted since patent office director Andrei Iancu took office in 2018 as a reason for the decline.

Under Iancu, patent owners have gained a new avenue for amending patent claims in PTAB reviews, and patent challengers are more often blocked from bringing multiple challenges against the same patent, under the agency’s new rules.

“A few shifts at the patent office have been sort of leaning in favor of patent owners,” Sophie Wang, a Choate Hall & Stewart LLP attorney who represents tech and pharmaceutical companies in IP disputes, said. “Director Iancu has sort of set a patent-friendly tone at the office.”

Iancu also aligned the standard that PTAB judges use to interpret patent claims with that of the district courts in late 2018. Patent owners had sought the change, arguing that different standards provided room for accused infringers to game the system.

The realignment could be driving down PTAB petitions “because there’s just fewer opportunities for strategic gamesmanship for the difference in claim constructions,” Saurabh Vishnubhakat, a Texas A&M law professor, said.

Taken together, the changes are giving accused infringers pause when deciding whether to file a validity challenge. Babcock said it’s not a “slam dunk” anymore that a company sued for infringement will petition for review.

“These are all little pieces on the scale that, as a lawyer and as a client, kind of depresses your notion of, ‘is this is going to be a good decision or not,” Babcock said.

Recent decisions by the U.S. Court of Appeals for the Federal Circuit call the ability of certain petitioners to appeal PTAB validity decisions into question, leaving these petitioners without an avenue to challenge their loss. In one example, General Electric last year was found to lack standing to appeal a decision upholding a rival’s jet engine patent.

Attorneys also note that the Supreme Court’s SAS decision forced the PTAB to either grant a patent challenge on all claims and grounds in a petition or deny review entirely. Before SAS, Vishnubhakat said, companies facing an infringement lawsuit could make various arguments in a petition and see what stuck, without much downside. Now, petitioners have to be more careful about how they pitch their case.

“People are taking a harder look, and deciding whether they want to file,” Shamita Etienne-Cummings, a leader in White & Case LLP’s intellectual property group, said.

The court rulings, combined with the rules changes at the patent office, are pressuring patent challengers to think ahead and assess all the potential impacts of filing a petition.

“Now, more than ever, you have to think about your entire strategy,” Kamholz said.