The Air Jordan logo is at the center of a photo copyright infringement case that may go before the U.S. Supreme Court.
Christian Petersen/Getty Images

A photographer accusing Nike Inc. of pilfering his 1984 picture of Michael Jordan to create its iconic “Jumpman” logo wants the U.S. Supreme Court to draw the line between when two pictures are just similar and when one is a rip-off.

The Supreme Court, if it takes the case, could clarify when elements in photos deserve the same level of copyright protection as aspects of music, paintings, and literature. Jacobus Rentmeester’s Dec. 3 petition to the high court pointed to an 1884 Supreme Court ruling involving an Oscar Wilde portrait that held photography as equal to the other creative fields.

The case is being closely watched by photography organizations, who have waged endless copyright infringement battles over stolen photos and say a win for Rentmeester would be a win for all photographers.

“Nike just decided, ‘We’re going to recreate the image.’ I have a real problem with that,” Mickey Osterreicher, general counsel for the National Press Photographers Association, told Bloomberg Law.

The question for the justices is how closely compositional arrangements and creative elements in a photo must match to create infringement.

Rentmeester snapped his staged picture of Jordan flying toward a basket in a ballet-style grand jeté pose for Life Magazine. He said Nike used it to stage another photo, changing details but not the image’s core layout, creative choices, and purpose. That image later evolved into the still-ubiquitous “Jumpman” silhouette logo.

Nike asked Rentmeester for the image shortly after it appeared in a photo essay ahead of the 1984 Olympics, he said in his lawsuit. The photojournalist said he allowed Nike to use the photo “for slide presentation only” but said the company instead commissioned the derivative for its ad campaign around its expensive new pitchman for Air Jordan shoes.

When Rentmeester complained, he said Nike paid him $15,000 for a two-year, North America-only license for posters and billboards. Nike broke those limitations as well, he alleged. Jordan, his shoes, and Nike would remain economic juggernauts for decades.

Rentmeester waited until the end of his commercial photography career before suing Nike in 2015 in the U.S. District Court for the District of Oregon. The court dismissed the case, finding the two images were not “substantially similar.” The opinion stripped nonprotectable elements of Rentmeester’s image and elements of Nike’s that didn’t match it.

That essentially left Jordan’s pose, positioning, and angle. The district court said that expression of the NBA star’s grand jeté could be protected, but that Nike’s version of it would’ve had to be “virtually identical.” The judge cited slightly different angles of limbs to conclude that it was not.

The U.S. Court of Appeals for the Ninth Circuit in a 2-1 vote found Rentmeester’s photo artistic enough to merit “the broadest protection a photograph can receive.” But its decision laid out a number of differences Nike introduced—including a background of the Chicago skyline and dusk sky colors, and slight differences in the pose—to clear Nike. 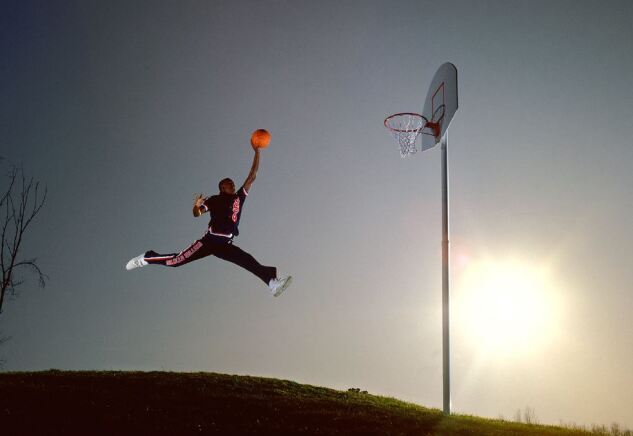 Photographer Jacobus Rentmeester wants the Supreme Court to revive his dismissed lawsuit claiming Nike stole his concept in this 1984 staged photograph of Michael Jordan to create its own photo and “Jumpman” logo.

Rentmeester attorney Dean M. Harvey, of Lieff Cabraser Heimann & Bernstein LLP, said the ruling broke from law and precedent by holding that individual creative elements had no protection whatsoever and treated photography “as an inherently inferior art form.” He cited an axiom that plagiarists can’t point to how much work they didn’t pirate as a defense.

Osterreicher said he was “very much disturbed” by the way the court parsed each unprotectable or slightly varied element to negate protection of the composition. The photojournalist-turned-lawyer said the court glossed over core similarities that show Nike ripped off Rentmeester’s artistic vision.

But Cynthia Rigsby, an intellectual property partner at Foley & Lardner LLP, said Rentmeester overstated how much the Ninth Circuit strayed from other federal appeals courts. Supreme Court clarity might help, but isolating elements in creative works “is what we’ve been doing in trademark and copyright law forever,” she said.

“We want to be careful not so give so much protection that people are inhibited from going forward and making improvements and changes to what’s out there,” Rigsby said.

The Ninth Circuit’s dissenting opinion said the infringement ruling was “not an uncontested breakaway layup,” and that a jury, or a judge in the summary judgment stage, should decide the “substantial similarity” question. The Supreme Court, if it takes Rentmeester’s case, could use it to issue guidelines on deciding a case before discovery or trial. Harvey said Rentmeester’s goal is not summary judgment but the right to ask a jury.

But turning to juries for nominally objective legal analysis could be costly and destabilizing for both copyright holders and alleged infringers, Rigsby said.

“Once you let the jury decide, lawsuits are going to go longer, and more things are going to be protected,” she said. “Also, it adds a certain amount of unpredictability.”

Rentmeester’s Supreme Court brief cited appellate opinions of Justices Samuel Alito and Neil Gorsuch, among others, to show courts giving more robust protection to photographs and elements within them. It called decisions like the Second Circuit’s Rogers v. Koons in 1992 “irreconcilable” with the Ninth Circuit’s new precedent, as it protected compositional elements of a posed black-and-white photograph of a couple holding puppies from an infringing colorful sculpture.

Thomas Maddrey, general counsel for commercial photography group American Society of Media Photographers, criticized the Ninth Circuit’s “complete discount” of Rentmeester’s efforts. He cited an array of creative choices that go into a photo—especially a creative, staged, and powerful one like Rentmeester’s airborne Jordan shot.

“You wouldn’t do this with a painting or a sculpture or something else. Photographers have had to fight so much harder to obtain copyright protection than other art forms,” said Maddrey, a former commercial photographer who backed Rentmeester’s failed bid for the full Ninth Circuit rehearing.

Rentmeester’s brief said the Ninth Circuit “strained” to find differences in the staged photos, which featured a specific player, activity, pose, framing, and general purpose “to trick the viewer into thinking that Jordan was performing a gravity-defying dunk.”

Osterreicher, who said NPPA would likely co-draft or join a friend-of-the-court brief on Rentmeester’s behalf, cautioned the photographer to “be careful what you wish for,” saying the justices could deal a setback for photographers if they enshrine the lower court’s analysis as a national precedent.

Osterreicher pointed to a broader context of devaluation in the industry given “exponential” proliferation of infringement on the internet.

“You have to look at the totality of the circumstances of the photograph itself,” he said. “We’ve seen enough of images losing value due to market reasons, and I’d hate to have the courts contribute to that.”