Plenty of women and members of minority groups are hoping to invent the next iPhone, blockbuster medicine or top-selling toy, but too often they don’t get patents that would ensure they get paid for their ideas.

A new report from the and Trademark Office concludes that those disparities could cost the U.S. its technological leadership because patents are frequently the first step to attracting investors.

“Innovation in the United States is highly concentrated, and vast swaths of our population are not fully participating,” the study, released last month, concludes. 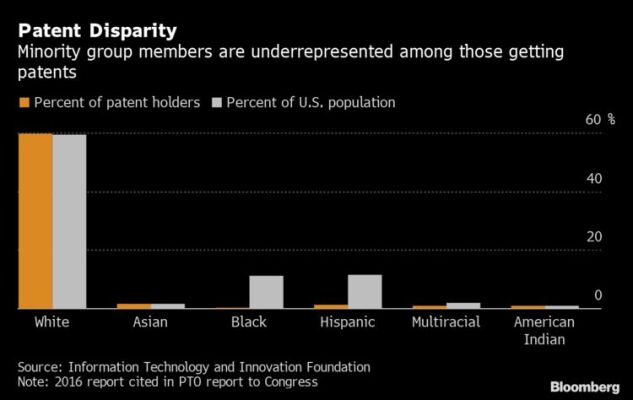 The magnitude of the problem isn’t precisely known because the patent office only collects the name, mailing address and residence of applicants.

Studies by independent groups such as the Information Technology and Innovation Foundation are based on surveys. A study last year found whites are more than three times as likely to become inventors as blacks. Other research commissioned by the Institute for Women’s Policy Research concluded that only 18% of U.S. patents list a woman as an inventor.

The October patent office study recommends Congress give the office authority to collect demographic data with its own confidential, voluntary surveys -- conceding that they need to be careful to avoid the perception that such data might be used in examining patent requests and deter underrepresented groups from applying.

The study found a variety of factors that led to the under representation of women and minorities among patent holders, including a history of legal, economic and educational impediments -- from slavery and segregation to laws that limited the ability of women to own property. There also continues to be a lack of diversity in the types of fields in which more ideas are patentable, including science, technology, engineering and math.

“It’s difficult to tell where in the system the exact breakdown occurs, but we do know it does occur,” Patent and Trademark Office Director said in an interview.

Ultimately, the nation would benefit from expanding the diversity of patent holders, Iancu said.

“For an individual, it helps with your career growth and potential. For a company, it helps you make and sell your product and be more successful at it,” he said. “In the aggregate, it helps the United States.”

One person who overcame the odds is Janet Emerson Bashen, president of , a Houston-based human resources consulting firm, who became the first African-American woman awarded a software patent in 2006 along with her cousin.

“I was looking at historic people and one of the things I ran across is a lot of African-American women who came up with something and didn’t get credit for it,” Bashen said in an interview. “I wanted to make sure I could protect what I was developing and I wanted to monetize it. What better way to monetize it than to patent it?”

Though American inventors still command the largest portion of the nation’s patents, the percentage is in high-tech fields such as artificial intelligence and blockchain. Consequently, that could reduce any advantage the U.S. may hold in areas such as artificial intelligence, wireless phones and the internet of things, according to a yearlong study conducted by the law firm and researchers at GreyB Services Pte.

“This is critical for our nation’s economic vitality as our country becomes more diverse and technologically complex,” said Leslie Flynn, a clinical assistant professor at the ’s Tippie College of Business who testified before Congress in May on the issue.

“I don’t see how we can remain competitive if we’re only allowing a small slither of the population to participate in innovation,” said Charles Hudson, whose San Francisco-based firm specializes in investing in minority-owned startups. “Right now, the amount of capital in the hands of people that are committed to supporting these folks is well, well below what the market needs.”

Despite being underrepresented among patent holders, women and minority inventors throughout history have revolutionized their fields. in 1965 invented Kevlar, the lightweight fiber in bulletproof vests. Elijah McCoy was a 19th Century Canadian-born inventor and engineer of African descent who invented a lubricant that improved train travel and is reputed to be the source of the phrase “the real McCoy.” His name is on the patent office’s Detroit regional office.

More recently, the patent office touts such inventors as , a woman chemist who has a patent for directed evolution of enzymes and in 2018 won a Nobel prize, and Marian Rogers Croak, a voice-over-Internet protocol pioneer who also patented text-to-donate technology after Hurricane Katrina and transformed the way Americans donate to charities.

Earl S. Bell, an African-American designer who obtained a patent in 2004 for an ergonomic chair, said “there are many people with inventions but they don’t have the ability to patent them, much less attract investment funds.”

“If that disconnect could be solved, the floodgates would be opened,” he said.

To contact the reporter on this story:
in Washington at esully2@bloomberg.net