The Library of Congress is pictured on Feb. 1, 2020, in Washington.
Photographer: Daniel Slim/AFP via Getty Images

The early performance of a first-of-its-kind copyright small claims tribunal bodes well for its success, attorneys say, even though nearly half of the claims brought to the board have already been dismissed.

Almost 300 cases have been filed at the Copyright Claims Board since it opened its doors in June 2022, according to data from the US Copyright Office. Though it’s still in its early days, and the board has yet to reach a final decision in any cases, attorneys say the number of filings is encouraging. They say the board is set up to be particularly useful for artists and photographers with smaller claims that need to maintain their ability to collect their income through affordable enforcement of their copyright.

Jacqueline Charlesworth, founder of Charlesworth Law and former general counsel for the US Copyright Office who oversaw the study that led to the creation of the board, said that the CCB essentially functions as a government-sponsored arbitration process. It presents a voluntary, lower-cost alternative to district court litigation for infringement claims of $30,000 or less.

“It’s a very inexpensive way to get a legal opinion on who’s right and who’s wrong, and I think there’s a need for that,” said Charlesworth. “Especially in the copyright area, where there’s a lot of confusion and people don’t always understand what their rights are and aren’t or what fair use is and isn’t.”

More than 80% of the 281 claims filed at the CCB through Dec. 31 involved infringement claims, according to data compiled by the Copyright Alliance, with more than half of those dealing with pictorial, graphic, and sculpture works. Motion picture and audiovisual works represented 16.7% of claims, according to the alliance, which represents the interests of more than 2 million individual creators and 15,000 organizations.

Although most of the claims were filed by individuals representing themselves, legal counsel represented claimants in at least 89 of the cases filed, more than 30%. 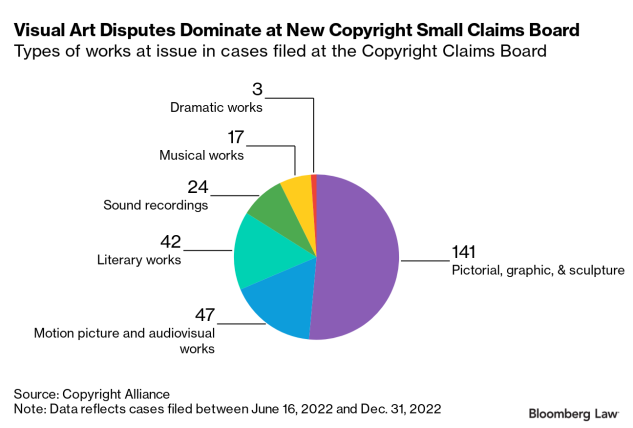 Nearly one-third of the claims are what the CCB deems “smaller claims,”—those seeking no more than $5,000—according to the Copyright Alliance. Such claims are decided by a single CCB officer under streamlined proceedings.

Charlesworth believes that the number of smaller claims filings is a good sign for the future of the board. A large part of the problem that the tribunal is trying to address is how to make it affordable for artists who are licensing works for around $1,500–$2,000 to be able to collect on the infringing use of their works, she said.

“It’s interesting to me that a lot of the claimants are not trying to go for the maximum, but they’re trying to get what probably they think is a reasonable payment for their work,” she said. “So that seems encouraging.”

One major concern raised while the board was being set up hasn’t borne out, as only 20 claims have ended with the respondents opting out of the CCB’s jurisdiction, according to Copyright Office data.

“The ‘other side’ has been saying ‘It’s never going to work,’” because everyone would just opt out, said Hartline. But respondents have overwhelmingly chosen not to opt out of cases at the tribunal.

“There’s tons of reasons why you wouldn’t opt out, especially if you thought that it’s going to go to federal court,” Hartline said.

The Copyright Office’s general counsel, Suzanne Wilson, told Bloomberg Law in an interview that the office is very happy “that the opt out number has been as low as it has to date.”

“There’s no predicting what’s going to happen in the future, but we have been pleased to see an embrace of the procedure so far, at least at this point,” she said.

Though watchers are bouyed by the utilization of the CCB, there remains room for improvement as 134 claims have been dismissed before the board reached the merits, according to Copyright Alliance data. Of those, 103 were dismissed due to a failure to amend a noncompliant claim.

“It jumps out to me that people are having problems,” said Devlin Hartline, a fellow at the Hudson Institute. He highlighted that there are several limitations to filing at the board, such as the inability to target a foreign respondent and the need to have registered works with the Copyright Office.

Instead of being discouraged by these numbers, some observers view them as proof that the CCB is excelling at its job.

Charlesworth said that when she was conducting the study about creating the board, stakeholders were concerned that people would file erroneous claims. This concern was addressed through the board’s use of a screening process by staff attorneys to ensure that meritless and procedurally deficient claims are caught early.

“Some pretty significant portion were dismissed because they were noncompliant,” Charlesworth said of the claims dismissed so far. “I think what that tells us is the screening process for the CCB is working.”

In a recent interview with Bloomberg Law, Register of Copyrights Shira Perlmutter acknowledged the high rate of dismissals and said that the office believes that means several of the cases settled, which furthers the alternative dispute resolution role of the board.

“The idea is this is for someone who does not need to have a copyright background, whether it’s the claimant themselves or an attorney representing the claimant,” she said.

The board is expected to issue its first decisions this year.

So far, they have received claims from 36 different states, said Wilson, demonstrating that there was a need for the board across the country “and its not simply the hotbed areas in district courts where you see copyright claims.”

“From the Copyright Office’s perspective, we continue to oversee how things are working and where any regulations may need modification or expansion,” said Wilson.

Wilson said she anticipates that the number of cases will continue to grow as people become more familiar with the CCB’s process.

In December, the office published an interim rule to ensure that copyright disputes referred from a federal court to the board would have a more streamlined procedural process. The rule also clarified standards allowing law students to represent a party before the board.

The Copyright Office has been informally consulting with other offices that are interested in introducing small claims tribunals of their own, including the Patent and Trademark Office, which is considering a small claims patent tribunal.

“There’s a learning curve on both sides,” said Hartline. “I think they’re doing a great job.”