Celebrity tattoo artist Kat Von D’s use of a famous photograph of jazz great Miles Davis has led to what’s believed to be the first lawsuit over whether an image’s copyright protection extends to tattoos, pitting questions about artistic freedom and body autonomy against photographers’ rights to own their creations.

Photographer Jeffrey B. Sedlik is suing Von D, who used his “Iconic Miles Davis Portrait” in a tattoo she inked on a colleague. Sedlik shot the photograph around 1989, and it has appeared in publications around the world, including Life magazine’s annual “Pictures of the Year” issue.

The case is on the road to trial, after a California federal judge recently said a jury must resolve disputes that include whether the image falls under the “fair use” doctrine—a copyright infringement defense that the US Supreme Court will tackle this fall in a case involving Andy Warhol’s print of a photo of the musician Prince.

“It is, as far as I know, the first case in which a tattoo artist has been sued for an allegedly copyrighted image on a tattoo on a client’s body,” said Aaron Moss, an attorney at Greenberg Glusker Fields Claman & Machtinger LLP.

Its outcome could help define the bounds of copyright fair use and the risk of chilling the expression of tattoo artists and others hoping to create work based on copyrighted images, attorneys say.

Von D, whose full name is Katherine Von Drachenberg, has appeared on reality shows such as “Miami Ink” and “LA Ink” and owns a tattoo company called High Voltage.

She inked a tattoo of Miles Davis on Blake Farmer, a lighting technician with whom Von D worked on a film project. Farmer provided Sedlik’s photo as a reference, which Von D used to create the tattoo, free of charge. 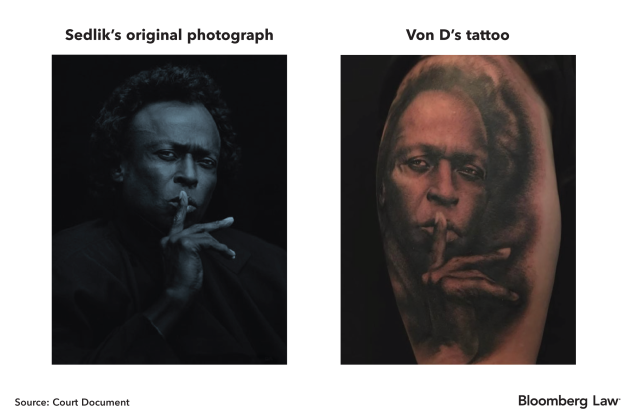 Sedlik’s lawsuit asked the court to require Von D and her company to remove any content incorporating the portrait from print and web publications, as well as social media accounts. He also requested all of Von D’s profits from the infringement, and additional damages.

Von D argues that the tattoo is a fair use of the photograph under the Copyright Act, pointing to the lack of commercial profit from the tattoo, among other things. Attorneys for Von D didn’t respond to a request for comment.

Judge of the US District Court for the Central District of California in late May partially rejected Von D’s argument that her work tattooing the photograph was transformative, ruling that the tattoo doesn’t create an inherently different meaning just by being located on the human body.

She left the broader fair use question for a jury, which will also decide how much Von D profited from social media posts featuring the tattoo, even though she wasn’t paid for the work itself.

The judge didn’t address Von D’s more novel argument that “fundamental rights of bodily integrity and personal expression” also weigh in favor of finding fair use. Though not among the four factors spelled out in the statute, courts and juries can consider other factors, the court wrote. Moss agreed.

“You do have to weigh the rights of the interest that the copyright owner has to control the public display of his work, against the right to privacy and bodily autonomy that the individual that has the tattoo has,” he said. “The problem with that, I guess, is that would give kind of free rein for any tattoo artists to use copyrighted images, for free and without impunity.”

Farmer, the recipient of the Miles Davis tattoo, isn’t a defendant in the case. If he had been and Sedlik sought an injunction, it would be “a very different case,” Moss said.

“The idea that you would force somebody to have a tattoo removed, I think, is fundamentally at odds with the right to bodily autonomy that’s protected in the Constitution,” he said.

Viva Moffat, a professor at Sturm College of Law, said it would be hard for Von D to make the bodily integrity argument stick because “it’s not her body that’s at issue.”

As far as the medium and canvas are concerned, “it’s not that different from other copyright questions or issues that have come up,” Moffat said. For her, the core of the case is the question of what happens when you take someone’s copyrighted photograph and translate it to a different medium for a different purpose.

All Eyes on Andy Warhol

That issue is already on tap at the Supreme Court, which in October will hear oral argument on whether an Andy Warhol print—commissioned by Vanity Fair for an article and later used by the artist for several additional works—infringes a copyrighted photo of Prince.

The high court could set precedent on fair use—particularly on the question of when a work is transformed enough to avoid copyright infringement—and affect Sedlik’s case against Von D. Sedlik is an expert witness in the Warhol case, according to court records. He declined to comment.

Attorneys say that though the jury is set to hear the tattoo case in September, the trial or final decision might be delayed until the Supreme Court weighs in on the Warhol case.

“My first thought is that’s going to have a very big impact on this,” said Yvette Liebesman, a professor at Saint Louis University School of Law. She said that in both cases, to create the Warhol print or the tattoo, “you have to start with a photograph of that person.” And in both cases, the question boils down to “How much does the photographer own?”

Tough Questions for the Jury

The jury will struggle to grapple with the complexity of the tattoo case, especially combined with the looming Warhol decision and disagreement on the boundaries of fair use even among judges, Moss said. “How’s the jury supposed to figure this out?”

He said he’d be interested to see jury selection, positing that jurors with tattoos might ask themselves, “Wow, what are the implications of this fight? If I find that the copyright’s been infringed, am I essentially a walking infringement myself?”

Other attorneys pointed to the need for the judge to give the jury clear instructions on dealing with the fair use analysis and bodily integrity claims. Some say this case could have troubling consequences on tattoo artists, who may fear being sued for creating tattoos referencing copyrighted images.

(Updated to make clear that Farmer, who has the Miles Davis tattoo, isn't a defendant in the case. An earlier correction reflected the proper spelling of Judge Dale Fischer's name and pronouns.)