Along with weighty matters of state like the presidential election and the future of health care, the U.S. Supreme Court’s tasks could include deciding whether trademark law has an exemption for potty humor.

Jack Daniel’s Properties Inc. is petitioning the high court to reverse a ruling by the U.S. Court of Appeals for the Ninth Circuit that a maker of dog toys could sell one shaped like the company’s familiar whiskey bottles. The appeals court held that VIP Products LLC’s pun-laden chew toy expressed a humorous message, involved the First Amendment, and satisfied the so-called Rogers test for incorporating trademarks into creative works.

That upset a balance between trademark law and free speech by dramatically and baselessly over-extending the Rogers test for evaluating trademark use in “artistic expression,” Jack Daniel’s and trademark groups argue. VIP Products this week secured a four-week extension of its Wednesday deadline to file a response asking the high court to reject the Jack Daniel’s petition.

The Ninth Circuit’s interpretation “would completely gut the trademark and dilution statutes,” trademark attorney James H. Donoian of McCarter & English LLP said. He said he couldn’t understand the basis for the dog toy being deemed an artistic expression, bristling at the court finding mere “humor” to be enough.

“It was one of those decisions you have to read through it a couple of times to try to grasp what the foundation of it was,” Donoian said. “It was very illogical in some places and it was also kind of short. It seemed to skirt some of the more important issues.”

But breaking down the doctrine so intricately is “playing 4D chess in a 2D world,” intellectual property professor Eric Goldman of Santa Clara University said. Complex analysis doesn’t change the fact that “one product gets you drunk, the other entertains your dog for a few minutes,” he said. Consumers won’t confuse Jack Daniel’s with a dog toy, one labeled “43% POO BY VOL.” and “100% SMELLY,” he said.

“Did they apply the Rogers test correctly? Who cares? It’s a dog toy based on potty humor,” Goldman said. “No trademark owner is going to voluntarily license their trademarks to make that.” 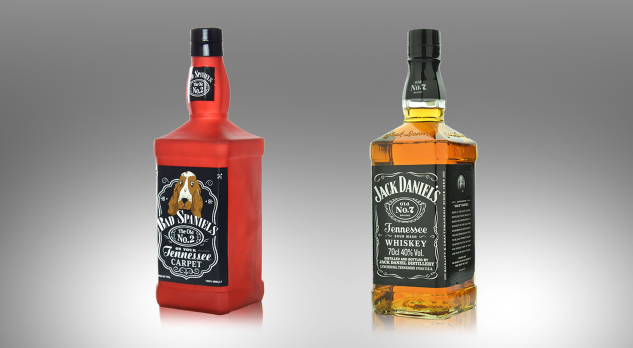 VIP said in a statement that “its good-humored and good-natured Bad Spaniels parody dog toy is an expressive work that invites consumers to both reflect on the humanization of dogs in our lives and to laugh at how large corporations like Jack Daniel’s can take themselves and their brands so seriously.” the liquor conglomerate that owns Jack Daniel’s, declined to comment.

A Leash on Rogers?

Now the Ninth Circuit’s proposed “novel approach” and “fundamental change” has “set the stage for the Supreme Court” to agree to hear the case, said trademark attorney Cynthia Johnson Walden of Fish & Richardson. She said several circuits have adopted the Rogers test and applied it to creative works.

“I don’t know that there’s been any kind of question on its applicability until the Ninth Circuit took the sideways view to apply the Rogers Grimaldi test,” Walden said.

The Second Circuit’s 1989 decision in Rogers v. Grimaldi found a movie title, “Ginger and Fred,” didn’t infringe Ginger Rogers’ right of publicity. Adopted by several circuits, the test requires only that the use be artistically relevant, and not explicitly misleading as to the involvement of the rights holder.

A Colorado district court in May rejected the Rogers test as “needlessly rigid,” though no circuit has done so.

Walden said it’s possible the Supreme Court could fundamentally alter the standard, which it has never addressed. But she said the high court more likely would clarify boundaries and rein in its reach. Most in the field see a place for the test, but think “it shouldn’t eviscerate the role” of trademark law, she said.

The Bad Spaniels toy copies the bottle shape, black label and distinctive fonts, replacing “Jack Daniel’s” with “Bad Spaniels,” “Old No. 7” with “Old No. 2,” and “Tennessee Sour Mash” with “On Your Tennessee Carpet.”

After a four-day 2017 bench trial, the U.S. District Court for the District of Arizona found the toy infringed and diluted Jack Daniel’s famous trade dress. It noted that 29% of potential purchasers shown Bad Spaniels in a survey figured Jack Daniel’s had endorsed the product.

But attorneys generally took greater issue with the Ninth Circuit’s path than its outcome. The court deemed the toy an expressive work, expanding protection and negating the need to worry about consumer confusion.

“Parody alone doesn’t necessarily just clothe everything in the First Amendment and protect it,” David S. Becker of Freeborn & Peters LLP said. Bad Spaniels may even have less of a parody claim than Chewy Vuitton, he added: “There’s nothing in the artwork on that bottle dog toy that’s attempting to make any kind of political or social statement on Jack Daniel’s, on alcohol, anything.”

“If a dog chew toy is an expressive work, then pretty much everything is, so I think that’s a concern,” Hobbs said. “It’s a big deal for brand owners.”

Attorneys and trademark groups are looking to the high court to corral where the Rogers test applies while generally accepting its fundamentals. But Goldman said he’s not sure where the line should be drawn because he finds the decision itself “baffling.”

Trademark law should provide substantial breathing room for social and economic activity, and courts often do that on their own, Goldman said. Judges are “pretty pragmatic” about trademark law and frequently recognize common-sense outcomes before they “work their way backward” from that conclusion, he said, adding, “I think trademark litigators know that.”

Regardless of that unorthodox work-backwards approach, he said, a lot of trademark cases like Bad Spaniels should never be litigated so far to begin with, given their cost and relative importance.

“We are in the middle of a pandemic and economic meltdown,” Goldman said. “To sink all these assets into this when all that’s taking place just blows my mind.”