Two recent lawsuits by social-media influencers accusing the website PopSugar of lifting their Instagram images highlight questions about how to protect copyrightable content that, in the digital age, is designed to be shared and liked as much as possible.

Beauty and lifestyle micro-influencers Nita Batra and Brittani Friedman filed separate class-action lawsuits in 2018 accusing PopSugar of reposting misappropriated versions of pictures from their Instagram accounts on its e-shopping site ShopStyle. Batra, who has 287,000 followers, agreed to a settlement June 10, leaving the legal questions unaddressed.

The lawsuit by Friedman, who has 35,100 followers, could give the same California district court another opportunity to weigh in on issues such as what’s copyright infringement in the social-media realm, how to calculate damages, and whether influencers give up certain rights to their content by agreeing to a social media platform’s terms of use.

“Because social media is relatively new, in general, there isn’t much case law related to the reproduction of influencers’ content by third parties,” business and entertainment lawyer Merlyne Jean-Louis said.

PopSugar declined to comment on Friedman’s lawsuit. The company is pleased to have resolved claims in Batra’s lawsuit, it said in a statement.

Micro-influencers, including fashionistas and foodies, have followings of tens to low hundreds of thousands on social media platforms. Brands consider such new-age tastemakers as the new conduits of word-of-mouth marketing and want them to promote products from credit cards to skincare products in return for cash or free goods. Influencers leverage their trendsetting talents to promote their brand-name products such as cookbooks and online courses.

Because likes, shares, comments and followers are their currency, influencers have to walk a fine line between safeguarding the rights to their work product and making enemies out of people they need to make their content go viral. Intellectual-property attorneys representing influencers said they’ve had to rethink how aggressively to go after infringers, and rely more on friendly warnings or cease-and-desist letters instead of rushing off to court. 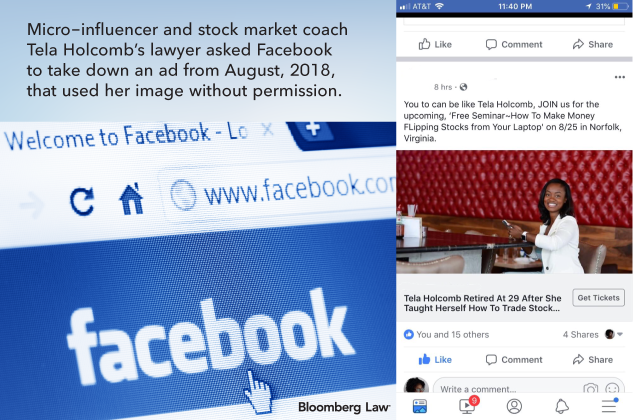 Influencers may not realize they grant a license to certain intellectual property each time they post, Michael Justus, a partner at Katten Muchin Rosenman LLP, said. That’s “non-negotiable,” he said.

“If you just have your own website and you post a video, you retain all copyright in that video, and you’re not licensing it to anyone necessarily. But if you post that same video on a social media platform, you are automatically granting a license to the platform in those cases and also other users who use it,” Justus said.

Justus foresees more influencer-centered litigation questioning the scope of licenses granted on other social media platforms. A person drafting terms of use can’t be crystal clear on every conceivable issue that may arise,"so there’s always going to be little gray areas and areas where there might be litigation over the scope of a license granted on these platforms,” he said.

He pointed out how a photographer in 2013 won $1.2 million in damages from Agence France-Presse and Getty Images for using, without permission, his pictures of the 2010 Haiti earthquake that he posted on Twitter. A New York federal court judge in that case said Twitter’s terms of use allowed for “reposting” of images but not commercial use.

Courts have yet to clarify whether something as routine as reposting and sharing on Instagram amounts to copyright infringement, Jean-Louis said.

Stephen Strauss, a Los Angeles-based shareholder at Buchalter who’s worked with Hollywood celebrities and others for over three decades, says he’s seen an uptick in his influencer clientele, mostly 20-somethings, in the last 18 months.

“I’ve had an education curve myself learning about the social media business,” he said. “It’s like teaching an old dog, new tricks in that regard.”

Strauss says the IP playbook he’s used with celebrities applies to influencers looking to register global trademarks, including on their names and hashtags, and protecting their content. But given that influencers “live and die on their likes and followers” he resorts to gentler enforcement techniques, he said.

“You want to be careful that you don’t do anything that might disturb the relationship between the influencer and their fans,” Strauss said. “You don’t want to be too overly aggressive in slight IP violations, if someone innocently does something. Things can go very viral and turn very nasty very quickly.”

But attorneys keep an eye out for egregious violations where content is stolen without permission or any credit—situations that may call for stronger measures such as litigation, Strauss said.

Tela Holcomb, an Instagram micro-influencer and stock market coach behind “TradeYour9to5,” said her lawyer helped take down an Instagram profile that lifted Instagram TV and Facebook videos and graphics from her profile. The bad actor was impersonating another influencer, she said.

“It’s really hard online when people are able to create fake accounts and pretend to be someone else,” Holcomb, who has 18,300 Instagram followers, said. “You don’t know who to go after.”

A Facebook ad inviting registrations to a finance-related workshop that used Holcomb’s picture and name, even though she wasn’t involved with the event, was taken down after her lawyer sent the bad actor a letter and complained to Facebook, according to Holcomb.

“My audience is going to stop trusting what they think is coming from me and then ultimately stop trusting me,” Holcomb said explaining the impact on her hard-earned following. “Then and my influence and following is no more.”

Attorney Jamie Lieberman of Hashtag Legal says she tells influencers not to pick a name on a whim. They need to make sure it doesn’t exist on social media first so there’s no potential infringement of another’s mark and that getting a trademark on a name they want isn’t a hassle, she said.

A brand looking to strike an endorsement deal with an influencer offers a limited license that lets the influencer use branded marks and marketing material, Lieberman said. She says it’s critical that such deals state what influencers can and cannot use.

“There are a lot of negotiations and a lot of details that go back and forth,” Lieberman said. “It’s really important to make sure it’s all clearly laid out.”

All the influencers really have, at the end of the day, is their name and following as they build personal brands, Buchalter’s Kennedy said.