Impossible Foods’ meat-free burgers are becoming a staple in U.S. restaurants and grocery stores. Now the company has taken its technology to a new place: the courtroom.

Redwood City, Calif.-based Impossible Foods Inc. has spent the past several years building a portfolio of patents around a key ingredient that gives its burgers meat-like flavor. It deployed one of those patents against a competitor, Motif Foodworks Inc., in a recent infringement lawsuit.

“It will be very interesting and, depending on the outcome, may have an impact on the trajectory of their portfolio and the extent of their protection,” said Nicole Galli, an attorney at ND Galli Law LLC in Philadelphia.

Competition among companies trying to corner the market on plant-based versions of meat has heated up amid increased consumer demand. In 2020, plant-based food sales grew by 27%, according to a Bloomberg Intelligence report.

Impossible Foods and other companies in the industry are getting more patents in places like the U.S. and Europe, studies of patenting activity show. Impossible Foods’ suit could be the start of more infringement fights.

It’s an area that “is probably quite ripe for contentious actions increasing in line with increasing patent filings,” said Christopher Mason of Appleyard Lees IP LLP in the U.K. 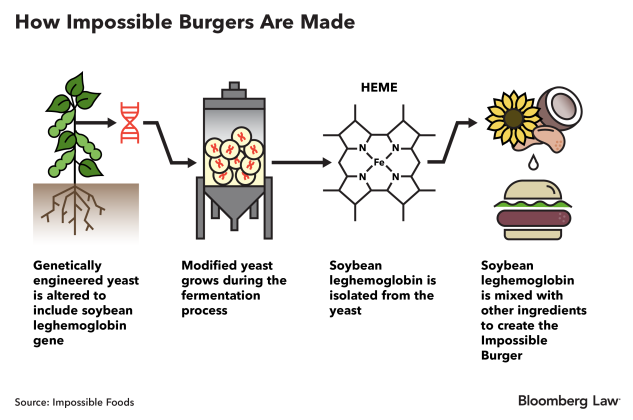 Patenting around plant-based foods also has been trending upward over the past decade, with a sharp increase in 2019, as companies stake out their position in the market, Mason found in a December 2021 analysis. The filings were concentrated in the U.S. and Europe.

The patenting activity seen so far is the “tip of the iceberg,” said Michael Ward, an attorney at Morrison & Foerster LLP in San Francisco.

But no one has patented like Impossible Foods, which has raised almost $2 billion in funding and expanded into stores in the U.S. like Walmart and Kroger, as well as restaurants like Burger King.

Mason in a December 2021 study linked Impossible Foods to more than 240 global patent applications, nearly 100 of which were granted. Those numbers are likely even higher now, given delays when patent applications are made public.

At the heart of Impossible’s patent portfolio is its plant-based “heme.” Found naturally in plants and animals, heme is a molecule that makes meat taste like meat. Impossible Foods found a way to produce heme from genetically engineered yeast. Svensson called it Impossible’s “crown jewel.”

“Having that foundational technology allows them to structure some IP around it,” he said.

That type of foundational technology is what has been missing from the patent portfolios of other companies, whose patents often revolve around methods of making plant-based foods, rather than patents on products, attorneys say.

Patent disputes often erupt in growing industries, but not always this fast, attorneys say. These kinds of fights are also unusual in the food industry, which has traditionally turned to trade secrets and trademarks for protection, not patents.

Impossible Foods in its complaint alleges Boston-based Motif’s meat products with the “Hemami” ingredient infringes Impossible Foods’ U.S. Patent No. 10,863,761, covering a “heme-containing meat replica” product. An Impossible Foods spokesperson said the company applauds efforts to develop plant-based products but won’t “tolerate attempts to undermine our brand or products through the deliberate and unauthorized infringement of our intellectual property.”

A spokesperson for Motif called the suit a “baseless attempt” to stifle competition and said the company plans to “contest these allegations vigorously.”

In Europe, an unknown challenger has asked that a related Impossible Foods patent be reexamined. Were a U.S. court to find Impossible’s patent covers an invention that is obvious or not novel, it could cast a shadow over similar patents, potentially raising questions about the strength of Impossible Foods’ existing portfolio.

“When there’s litigation and people start spending lots of money trying to defend themselves, they’ll spend a lot of money trying to find prior art that maybe the patent office didn’t find,” Svensson said. “If that were to happen, then potentially it could call into question some other patents.”

The alternative meat market is projected to jump from $4.2 billion to $74 billion in the next 10 years, driven, in part, by an awareness of the sustainability benefits, according to the Bloomberg Intelligence report. Galli said more innovations are coming.

“It’s a growing market where people know there’s a lot of money in the long term,” she said.

Companies right now are working to come up with plant-based fish and other types of lab-grown meat. In Europe, the startup NovaMeat says it has developed a 3D printed steak. Large companies like Nestle and Unilever are also getting into the mix. 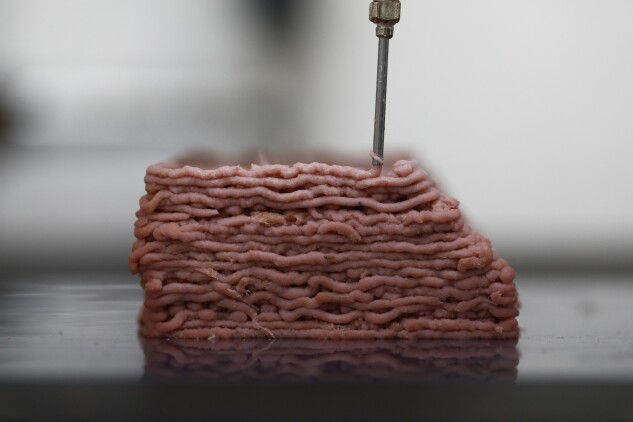 A 3D printer prints a variation of animal-free meat muscle formulation with color in the laboratories of Redefine Meat Ltd., in Ness Ziona, Israel, on Nov. 18, 2019.
Photographer: Corinna Kern/Bloomberg via Getty Images

This activity is expected to lead to more patents, as companies seek to protect their innovations. Still, the market has been fragmented, with companies creating their own niche. Some attorneys said that could limit the number of infringement fights.

“Competitors have sort of their own narrowly focused IP,” said Gaby Longsworth, an attorney at Sterne, Kessler Goldstein & Fox PLLC in Washington. “They may be stronger patents but you tend not to infringe because you can tweak some of the specific elements and get around those types of claims.”