A logo is displayed on a cup inside a Starbucks Corp. coffee shop.
Photographer: Daniel Acker/Bloomberg via Getty Images

Starbucks Corp. has spent nearly six years trying to convince the Patent and Trademark Office that a white cup with a plain green dot is a distinctive design — and therefore warrants trademark protection.

The chain’s most recent design launched in 2011, when it simplified its black and green circular emblem. Its cups now feature its iconic siren carved out of a green circle without lettering. But now the coffee chain is arguing that it should have control over an even simpler design on a white cup—the green circle itself.

The trademark office isn’t buying it.

Starbucks’ bid to broaden its trademark protection arsenal argues the coffee-drinking public doesn’t need its siren logo to associate the design with the mega-chain. But the PTO has repeatedly said Starbucks’ sparse use of the green dot fails to establish a “distinct commercial impression” in the absence of the logo.

Both sides will appear before the U.S. Trademark Trial and Appeal Board to argue their case at a Nov. 21 hearing.

Starbucks’ existing registered trademarks on its look and limited use of the siren-less dot raises the question of how much trademark protection it stands to gain. As Starbucks said in a recent 10-K filing, inconsistent uses of its brand and other intellectual property assets from unauthorized uses “can erode consumer trust and our brand value and have a material negative impact on our financial results.”

The application seems like a proactive measure to further protect its “very strong brand,” which is important to shareholders, Argus Research Corp. securities analyst John Staszak said. He didn’t know how much this particular effort would add, and said he was more concerned with specific efforts to drive customer traffic.

Registration of the green dot might help Starbucks enforce its marks against “clear bad actors,” but not necessarily against unintentional infringers, Anderson Duff, a New York-based trademark attorney for intellectual property law firm Revision Legal PLLC said. He called the mark “difficult to obtain, and to police,” and predicted Starbucks’ argument that the logo isn’t essential would ultimately fail.

“It doesn’t strike me as all that complicated a matter to imagine a Starbucks cup,” she told Bloomberg Law, adding that the “impressionist, cubist” version of the logo will further cement itself as representing Starbucks.

Starbucks didn’t respond to a request for comment from Bloomberg Law. The PTO declined to comment on an open application. 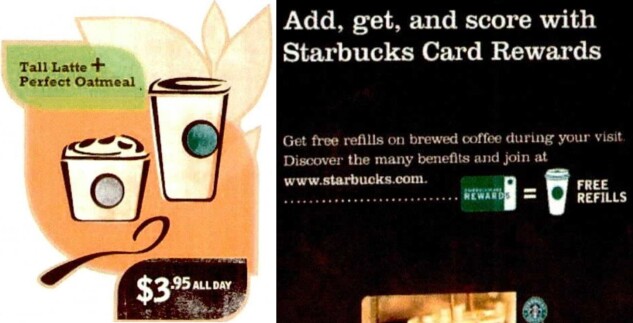 Starbucks said in its 2012 application it has used a cup with green dot as an icon on gift cards, a mobile app, and in-store displays. It argued that its actual cup logo, including the siren, looks like a green dot from far away. Starbucks appealed a final examiner rejection to the board in 2015 and asked for an oral argument in September after a series of rejections and revisions.

The fight tests how far big brands can go in registering simplified or incomplete versions of well-known logos. The outcome could clarify the threshold for sufficient use of a derivative mark to create a distinct consumer impression. But since past registrations aren’t binding precedent, the case may end up just another example of how application of trademark law hinges on examiner judgments of unique, case-specific facts.

Trademark examiners must decide whether an applied-for mark has “acquired distinctiveness,” apart from other branding. Other companies have successfully registered designs minus core logos, such as the silver and blue pattern behind the Red Bull logo and the label placement on a Johnny Walker whiskey bottle. Other incomplete looks, like an outline of a Wendy’s sign, have been rejected.

Starbucks says in this case, PTO has ignored law and its own precedent in a way that “exacerbates the USPTO’s acknowledged consistency problem.”

Starbucks cited a survey paired with expert testimony that it said decisively shows most coffee consumers recognize a white cup and plain green dot as “Starbucks.” An examiner criticized the survey’s methodology, though Starbucks complained the examiner only did so—baselessly—four years after it was submitted.

Starbucks also noted it had previously registered plain circular marks on cups based on its old logo, with lettering and siren removed. But the old logo had clearly delineated circles whereas the siren is integral to its new emblem as it dissolves into the white background, the examiner said.

The ultimate question in Starbucks’ appeal is whether the examples of its use satisfy the trademark office’s requirements, John Gary Maynard III, a trademark attorney at Hunton & Williams LLP, told Bloomberg Law. Maynard said he understands Starbucks’ frustration with the examiner, but said if purported examples of the mark’s use, known as specimens, are not “dead-on” identical to the applied-for mark, “nine times out of 10, the PTO is going to ding you.”

The examiner claimed Starbucks’ specimen icons did not match the applied-for mark because they included either a cap or foam obscuring the rim of the cup. The examiner also said Starbucks’ failure to “identify the scope of the mark as a three-dimensional mark” was enough to sink its application.

Distinguishing between 2D and 3D had no basis in law or precedent, Starbucks argued in its appeal. Specimens “must only create in the mind of the purchaser an association between the mark and the identified services, not expressly identify them,” Starbucks said.

Alexandra Roberts, a trademark law professor at the University of New Hampshire, said the core question is whether the plain circle, by itself, functions as a clear indicator of who made a product when a customer first sees it.

“It’s a clear ‘no’ from the USPTO on this,” Roberts said. “If not for the image of siren on top of the green circle, would you even notice the green circle as a separate thing? That seems unlikely.”