An EU-based patent-holding company has launched an array of litigation against Apple Inc., Alphabet Inc.'s Google and Amazon.com Inc., scooping up scores of old patents and hitting the tech giants with infringement lawsuits.

Uniloc Luxembourg SA and its U.S. unit have filed 28 lawsuits against Apple, 21 against Amazon and 14 against Google this year, Bloomberg Law data show. The company has filed 171 lawsuits in 2018 as of Nov. 23, the data show. Uniloc has been more active this year than some other patent-assertion entities. Intellectual Ventures Management LLC has filed 18 lawsuits during the same period, PersonalWeb Technologies LLC has filed 158, and Blackbird Tech LLC that filed 34, Bloomberg Law data show.

Uniloc relies on buying patents to make money through litigation and licensing. Its targets face high litigation costs, sometimes in years-long legal battles, which can potentially hurt sales of products and services at the heart of the infringement claims.

The company has its eye on areas where Apple, Amazon and others are making products, while scoping new technologies and markets to litigate or license its patents, Kent Richardson, a partner at ROL Group told Bloomberg Law.

“Uniloc is trying a new tactic to diversify their risk on any one patent or patent litigation,” Richardson said.

Google, Apple and other companies Uniloc has sued have resorted to administrative patent challenges called inter partes reviews at the U.S. Patent and Trademark Office to try to kill Uniloc patents they’ve been accused of infringing, with mixed results. Apple, Uniloc’s top 2018 target, is waiting on patent office rulings on nearly a dozen Uniloc patents. 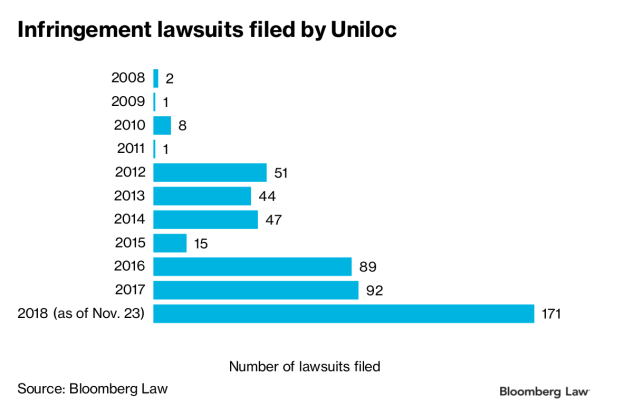 Uniloc has built an arsenal of nearly 400 active U.S. patents, according to Bloomberg Law data. Patents granted as far back as the 1900s have been part of Uniloc’s flurry of lawsuits, after the company snapped up old patents from Hewlett Packard Enterprise Co., IBM Corp., and others. Uniloc already has enforced some of more than a dozen patents that it purchased from Hewlett Packard in 2017.

Amazon.com’s Alexa cloud-based voice service allegedly infringes another former Hewlett Packard patent, according to Uniloc’s March lawsuit in the U.S. District Court for the Eastern District of Texas. More than half of all Uniloc’s lawsuits this year have been filed in the East Texas court, which has a reputation for being friendly to patent holders.

TC Heartland requires plaintiffs to file infringement lawsuits where a defendant resides or is incorporated, not just where it makes a sale.

Uniloc has turned to the East Texas court for one of its latest lawsuits. The company alleged in a Nov. 17 lawsuit that Google Pixel phones infringe a patent related to anti-theft protection, formerly owned by Koninklijke Philips N.V. It said it has come to the right court by arguing in its complaint that Mountain View, California-based Google keeps data servers in the Eastern District of Texas.

Uniloc is “feeling this out and it hasn’t abandoned its strategy to assert patents against big companies and get a settlement, Sukhatme said.