The attorney defending the former Minneapolis Police Officer accused of killing George Floyd has built a career handling hundreds of alcohol-related traffic offenses and has tried a handful of homicide cases.

One of those homicide cases brought Eric J. Nelson onto the national stage when he defended the wife of a former Minnesota Vikings player in a hit and run death, but nothing in his past compares to the high-stakes, public trial ahead.

The Minnesota Police and Peace Officers Association selected Nelson, the managing partner of Halberg Criminal Defense, to represent Derek Chauvin who faces charges of second-degree murder and manslaughter. Floyd died May 25, 2020, moments after Chauvin knelt on his neck while apprehending him outside of a convenience store for allegedly using a counterfeit $20 bill, and his death sparked protests across the country over police brutality and racism.

Jury selection started yesterday and resumes today. During the first day of questioning, Nelson asked potential jurors about their knowledge of the case, their experience with martial arts training, and their attitudes toward Black Lives Matter and Blue Lives Matter. Three jurors were seated, and jury selection is expected to continue for at least three weeks.

Julie Rendelman, a criminal defense attorney and former New York homicide prosecutor, said an attorney whose background is largely DWI cases wouldn’t be her first choice if she were the defendant in a homicide case. But, she said, most criminal defense attorneys haven’t tried homicides in which a police officer is the accused, and “99% of them haven’t tried a homicide case where the entire world is watching.” Rendelman is not involved in the case, but she has seen many high-profile homicide cases play out in her career.

Nelson, who is licensed to practice in state and federal courts in Minnesota and Wisconsin, has been the lead defense attorney in at least four homicide cases and has handled hundreds of driving while intoxicated (DWI) and alcohol-related traffic offenses in his nearly two decades as a criminal defense attorney, according to a Bloomberg Law analysis of his record and career highlights listed on his firm’s website.

In Minnesota since 2010, Nelson has defended about 880 criminal charges for clients. About 60 percent were traffic-related, and the largest number were defending those accused of driving while intoxicated, a serious criminal offense that can sometimes result in a jury trial, according to court data reviewed by Bloomberg Law. 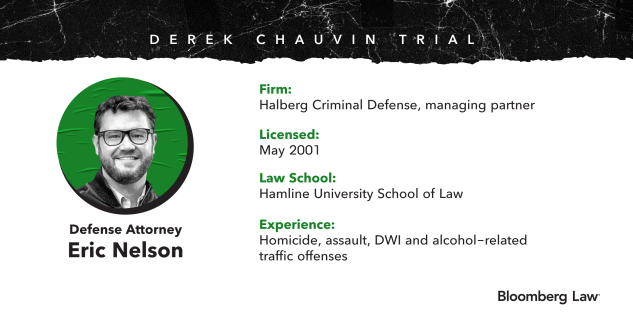 Defense attorneys say Nelson still has valuable courtroom experience that he will need to represent Chauvin.

“He’s an excellent criminal defense attorney,” said attorney Earl Gray, who has worked with Nelson and is representing one of the other three Minneapolis police officers charged alongside Chauvin in connection with Floyd’s death. “He might not have a huge name yet, but he isn’t that old yet.”

Nelson is a 2000 graduate from Hamline University School of Law in St. Paul, Minn. He’s been practicing criminal defense since December 2001.

“There are so many attorneys that you see out there that handle some high-publicity cases with absolutely no experience and no right being in that courtroom, so arguably when I compare him to that he is more experienced than most of them,” said Rendelman, who tried more than 60 cases before becoming a defense attorney.

The Minnesota Police and Peace Officers Association, or MPPOA, which is paying for Chauvin’s legal fees, would not answer questions about how it selected Nelson.

“MPPOA won’t be commenting on some private items, but I can confirm for you that the MPPOA’s Legal Defense Fund is paying the legal fees for all of the former officers charged, as it does with all members of the MPPOA that face legal issues while on-duty,” said Leslie Rosedahl, a spokesperson for the police group.

Some criminal defense attorneys say Nelson hasn’t had a lot of opportunities to take on a high-profile homicide case.

“Public defenders will get a lot of experience doing murder trials, but it’s not like there are a lot of high-profile murders in Minnesota,” said Mike Bryant, managing partner at Bradshaw and Bryant PLLC, a personal injury and criminal defense firm that represents clients across Minnesota.

In 2011, Nelson defended Amy Senser, who is married to former Minnesota Vikings player Joe Senser, in a case that put him in a national spotlight with coverage by ESPN. Senser went on trial for the hit and run death of Anousone Phanthavong.

During the trial, Nelson argued Senser didn’t know she had struck Phanthavong with her car, believing instead that she hit a construction cone or barrel, according to a summary of the case in a Minnesota Appeals Court decision that affirmed her convictions of criminal vehicular homicide.

Nelson also lost a 2013 case defending Roger Holland, who was charged with murdering his pregnant wife and their unborn child. Holland was convicted of first- and second-degree murder, a conviction that was ultimately upheld by the Minnesota Supreme Court.

But Nelson won an acquittal in the 2015 homicide case against Levi Acre-Kendall, a 19-year-old who was accused of stabbing a Wisconsin fisherman to death during a fight along the St. Croix River. Acre-Kendall claimed self-defense in the trial, which took place in a Wisconsin State Court.

More recently in 2018, Nelson was hired as co-counsel with Gray to defend Carl Anderson, a Minnesota man who faced second-degree murder charges for shooting a neighbor during a dispute over access to a private lake. Anderson argued self-defense and was acquitted of the charges.

Gray keeps a list on his website of cases he has won, and it includes 25 homicide cases, dating back to when he started practicing law in 1970. The list includes a victory in another high-profile trial of a Minnesota police officer accused of killing a Black man while on duty. Gray was one of the attorneys for St. Anthony police officer Jeronimo Yanez, who was acquitted by a jury in 2017 of all charges in the shooting death of Philando Castile.

The Anderson case was the first time Nelson and Gray worked together, and they would have again if Chauvin’s trial hadn’t been separated from the other former police officers charged with aiding and abetting second degree murder and aiding and abetting second degree manslaughter in connection to Floyd’s death. Gray is representing Thomas Lane, who knelt on Floyd’s legs and asked, “Should we roll him on his side?” after Floyd said he couldn’t breathe.

“I looked at him and he looked surprised,” Gray said of Nelson when the judge announced the trials would be separated. “It’s a lot easier when you have three, four defendants for the defense because there are times in the trial when you don’t have to be on your toes.”

Nelson is allowed to have two staff members from his firm with him at the defense table throughout the trial, but neither Nelson nor his law partner Marsh Halberg responded to questions about who that will be.

If Nelson wins the case, Gray said it will likely be on the “causation factor,” or other things that may have contributed to Floyd’s death. Nelson is arguing Floyd died from drug use and pre-existing health conditions, not strangulation.

“Put simply, Mr. Floyd could not breathe because he had ingested a lethal dose of fentanyl and, possibly, a speedball,” Nelson said in an August motion. “Combined with sickle cell trait, his pre-existing heart conditions, Mr. Floyd’s use of fentanyl and methamphetamine most likely killed him.”