Fewer patent challenges are being turned away under a rule that allows an administrative tribunal to take parallel litigation into account, as the agency faces calls to revisit the rule and lawyers adjust their approaches.

The US Patent and Trademark Office’s framework under Apple v. Fintiv allows the Patent Trial and Appeal Board to deny review based on a parallel infringement case advancing in federal district court or at a trade agency.

So far this year, the PTAB has relied on Fintiv to deny review in less than 10% of the cases in which the board evaluated the rule’s factors, according to a Bloomberg Law analysis. This is down from a nearly 40% denial rate in the first months after the Fintiv decision was designated precedential in May 2020.

Adjustments made by challengers have played a large role in the drop in denials, attorneys say. Speaking at a recent conference, former Federal Circuit Judge Kathleen O’Malley said the decline shows the Fintiv rule has “become much ado about nothing.” Still, there remains strong opposition to the rule, including from companies like and that argue it preempts legitimate challenges.

Kathi Vidal, who was sworn in as patent office director last month, has said she’ll look at the rule.

“The big question is should there be a Fintiv rule anyway,” said Perkins Coie LLP attorney Lori Gordon. She added that “petitioners are understanding the playing field a little better under the Fintiv framework but that doesn’t mean it’s the right framework.”

Set through agency precedent under the Trump administration, the Fintiv rule lays out considerations for PTAB judges to weigh when determining whether to launch a review of a patent that is at issue in a parallel infringement case in federal court or the US International Trade Commission.

Those factors include whether and when a trial date has been set in the infringement case, the extent of overlapping issues, and whether the other tribunal has paused its case for PTAB review. The PTO previously said the rule helps ensure the PTAB isn’t doing redundant work.

In the final eight months of 2020, immediately after Fintiv was made precedential, the PTAB denied more than 125 patent challenges under the rule, or 38% of the cases where the Fintiv factors were evaluated, according to Bloomberg Law data. Cases were denied under the rule at a similar rate in the first half of 2021, with 35% of cases in which the Fintiv analysis was conducted being rejected.

Intel was among the companies turned away the most in this span, with the board denying a dozen challenges it brought against VLSI Technology LLC patents. This included two patents Intel was later told to pay $2.18 billion for infringing. Finnish gaming company Supercell Oy also was denied review under Fintiv of seven computer game patents belonging to rival Gree Inc. that were later part of two separate jury verdicts totaling more than $100 million.

Denial rates dropped sharply in the second half of 2021, the data shows, with the PTAB denying review under Fintiv in 13% of the institution decisions where it evaluated the factors. That downward trend has continued in the first part of 2022, with just 13 cases being shot down under Fintiv through May 26, a rate of less than 10%. 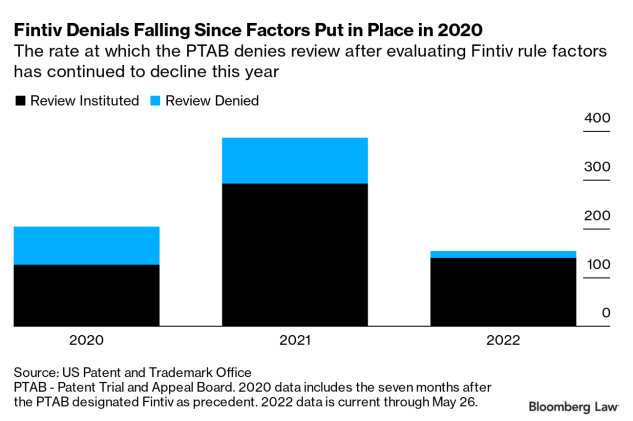 One major reason for the decline, attorneys say, has been an adjustment made by challengers at the PTAB. A greater number are willing to promise the board that they won’t pursue certain invalidity arguments in the parallel infringement case if an administrative review is instituted.

The adaptation followed PTAB’s move in December 2020 to designate as precedential its decision in Sotera v. Masimo Wireless, which said a challenger’s stipulation that it won’t bring in district court any arguments that it raised, or could’ve raised, before the PTAB weighs strongly in favor of review. Most petitions turned away this year either didn’t include a stipulation or made a more narrow promise.

Joshua Goldberg of Finnegan, Henderson, Farabow, Garrett & Dunner LLP said there was an adjustment period after the Sotera decision became precedential, but lawyers have become more comfortable with the waivers.

“Parties are getting used to it and seeing how the board is treating different cases after Sotera,” Goldberg said. “It’s becoming more predictable. Petitioners and patent owners alike—they’re able to better make decisions about how to address it.”

For accused infringers, this tradeoff—waiving certain invalidity arguments in district court in exchange for PTAB review—can be worthwhile. If the PTAB finds the patents invalid, the infringement case or even a jury verdict could be set aside.

And under estoppel rules, once there is a final decision from the PTAB, petitioners are prevented from raising any arguments that could’ve been raised at the board. For many companies, the stipulations may not be much of a sacrifice, attorneys say.

“At the end of the day they aren’t giving up much, if anything at all,” said Wendy Verlander of Verlander LLP. “It’s an easy give for the petitioner.”

Another factor in the decline of Fintiv denials is that the PTAB appears to be putting less stock in district courts’ scheduled trial dates, several attorneys said. This follows criticism that trial dates can be unreliable.

In a recent study examining 55 Fintiv denials from May through October 2020, Gordon and other Perkins Coie attorneys found only seven PTAB decisions relied on a trial date that proved accurate. In four of those, the trial had already occurred by the time of the institution decision.

Sen. (R-N.C.), a general supporter of Fintiv, has also questioned the PTAB’s reliance on “demonstrably inaccurate trial dates” set by Judge Alan Albright in the Western District of Texas.

“I think the PTAB has realized over the years that those trial dates may move,” Paul Hastings LLP attorney Naveen Modi said. “I think they are digging deeper into what is happening with the trial dates.”

The US Court of Appeals for the Federal Circuit will consider the Fintiv rule in the coming months, as Intel, and other tech companies appealed a district court ruling tossing their lawsuit alleging the rule violates the Administrative Procedures Act.

There is also political pressure for the PTO to revisit the rule. Nearly two dozen companies, including Intel, GM, and , wrote Commerce Secretary Gina Raimondo earlier this year, asking for a Fintiv rule repeal.

They argued the rule is allowing “litigation financiers” to “obtain judgments for hundreds of millions and even billions of dollars based on patents that never should have issued.”

Gordon, the Perkins Coie attorney, said she doesn’t see a way to make Fintiv workable. The framework has been applied inconsistently by different panels of PTAB judges, she said, and it requires the board to predict trial dates that are out of their control.

It also forces challengers, who are constrained to word counts in their petitions, to devote space to the Fintiv analysis, effectively weakening their substantive arguments, Gordon said.

“What we want from these proceedings is a way to assess validity with the best arguments coming out from both sides,” Gordon said. “By putting all these constraints on it, you’re not getting the best proceeding going forward.”

Samantha Handler in Washington also contributed to this story.

To contact the reporters on this story: in New York at mbultman@correspondent.bloomberglaw.com; in Washington at kgriffis@bloombergindustry.com