Peaches Christ stepped onto stage as a drag queen for the first time in the 1990s, and walked into a profession that was shunned.

“We weren’t even something people thought about unless it was a freak show on daytime television or something,” said Joshua Grannell, the actor and writer who performs as Peaches Christ and has trademarked the stage name. “Even the gay community,” Grannell said, “didn’t want us in their parades, didn’t want us representing them.”

Today, drag has gone mainstream, the landscape shifting from underground shows to sold-out performances and even brunch, due in large part to the long-running reality TV competition “RuPaul’s Drag Race.”

“Drag now is like the pumpkin latte of gay culture,” said Grannell.

But intellectual property law hasn’t always kept up, leaving some performers embroiled in copyright and trademark battles over their acts and stage names, said University of Essex law professor Eden Sarid, whose work has been published in several US law review journals.

“IP loves to pride itself as something that is very neutral: ‘As long as you fall within the subject matter and the formalities, you’re good to go,’” said Sarid, “That’s not true.”

“The way that these formalities are designed, they’re designed with a certain type of creativity in mind,” he said. “And seeing how much this impacts the everyday lives of people who are not part of mainstream culture was mind blowing to me.”

Before “RuPaul’s Drag Race” debuted on TV in 2009, drag performances garnered little attention, and performers rarely worried about legal trouble for the stage names they used or the pop artists’ songs they lip synced to.

“Now, they’re like, ‘Hey, I need to clear copyrights. I need to talk to the collecting societies,’” said Sarid. “So, the more mainstream it becomes, the more they become aware, I think, of IP matters.” 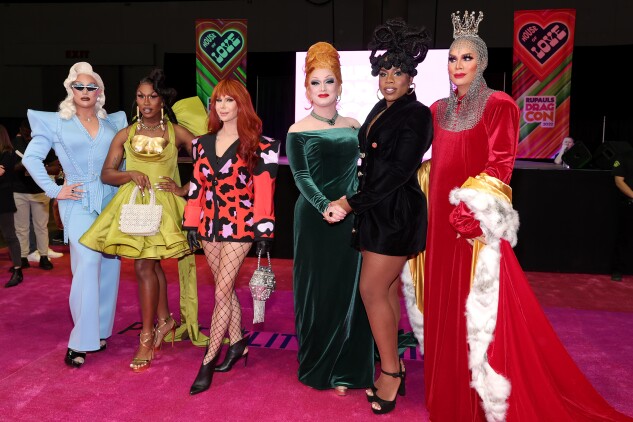 With their growth in popularity, drag queens increasingly must take music copyrights into consideration.

“Anytime you play a song—and to anyone other than, like, your friends in your own living room—that requires a license,” explained Brian Murphy, an attorney with Frankfurt Kurnit Klein & Selz PC in New York.

When performing in a club, most drag queens are covered by the establishment’s music licenses. If they incorporate the music into an act in a different setting, however, they might need additional rights, said Murphy.

“When it comes to music, you know, there’s multiple rights holders,” he said. “There’s the songwriters, and these days just about any song is written by not one person but multiple people. And each of those is a different rights holder.” Rights to the mix held by producers and music labels only compound the issue.

In March, drag queen Betty O’Hellno performed at halftime of an NBA game at Capital One Arena in Washington, D.C., home court of the Washington Wizards.

While the game was televised, the halftime performances were not.

“I was the first drag queen to ever do a halftime show there. But it wasn’t on TV, and you couldn’t watch it because the rights for the music were too high,” said the performer. “I think that’s a problem, definitely, with visibility.”

Gallina Port De Bras—a drag queen who performs in Israel—teaches courses on drag and tells students that one of the biggest issues is getting permission from artists to use their songs in performances.

For bigger entities such as “RuPaul’s Drag Race,” acquiring the rights to popular music can be easy. But it’s significantly harder for local queens around the world without the backing of a big name.

“The question of getting permission is a complicated question,” said Gallina, also known as Gil Naveh. “Because I mean, I’m a drag queen from Jerusalem. Why the hell would Madonna answer?”

“How come my bread and butter for 21 years is not okay, but for everyone to be lip-syncing on TikTok is okay?”

Drag queen Nina West inspired a street name in Columbus, Ohio: The Nina West Way. But Andrew Levitt—who performs as Nina West—doesn’t have a trademark to the drag persona thanks to an ongoing legal dispute brought by Nine West claiming that the moniker infringes on its fashion brand. Levitt declined to comment on the case and Nine West did not respond to a request for comment.

For many queens, parody and imitation are an essential part of their drag performances and identities, which puts them at a disadvantage when it comes to the boundaries created by intellectual property rights. Even “parody” defenses can be challenging to raise in trademark proceedings.

Drag performer Brita Filter said the idea for that stage name was born after a show playing one of Cinderella’s stepsisters.

Jesse Havea, the performer, met someone named Brita at an after-party for the show. “I was like, ‘Oh, my god, it’s like Brita Filter. That’s so funny.’ So I decided on the plane back to New York that my catchphrase was going to be, ‘Anything but pure.’”

“I’m Polynesian so I have such connection with water and the ocean and I call myself the Moana of Manhattan,” said Havea. “I thought it was very clever to use that as my name as well, just because of who I am.”

But the name Brita Filter presented an issue when Havea signed on for “RuPaul’s Drag Race.”

“I was so mad because, like, they wouldn’t even let me say anything that happened to do with water or with being thirsty,” said Havea, who was referred to only as Brita on the show. Also prohibited: the catchphrase “Anything but pure,” because it might be associated with Pur, another water filter brand.

Though the company behind Brita water filters has not raised any issues with the drag queen—and even gifted Havea a set of products—the performer has steered clear of trying to trademark the stage name or create customized merchandise.

“I don’t think we’re safe,” Havea said. “I think anyone could come for us at any moment.”

And even having IP law on your side has its limits, according to some drag queens.

“Peaches, the pop star, who I adore, came up after me,” said Grannell, the actor who performs as Peaches Christ. “And she did a tour called ‘Peaches Christ Superstar.’ That was very, very confusing for folks because I was on tour with my movie, ‘All About Evil,’ at the same time.”

Some people bought tickets to Peaches Christ (the drag performer) thinking they’d be seeing Peaches (the musician), and vice versa. “She and I actually talked about it and I could not blame her because as Peaches the pop star, she was literally doing ‘Jesus Christ Superstar.’”

“Basically, you can’t really own anything,” says Grannell. “I mean, you can but it doesn’t stop someone from becoming Peaches Christ.”