Donald Trump, years ago, famously suggested his brand’s value fluctuates based on his feelings on any given day. But it has more to do with how people feel about him.

Trump has long wrapped himself in a personal brand he valued as high as $4 billion before he became president. Successes like Trump Tower and “The Apprentice” helped absorb flameouts like his airline, casinos, and steaks, helping him get elected president despite six bankruptcies, fraud and discrimination lawsuits, and sexual assault allegations.

But now a divisive presidency capped by a deadly riot on Capitol Hill has stirred unprecedented brand-altering forces. The abstract enterprise of determining his name’s value carries concrete implications as Trump returns to a business where old partners are fleeing, revenues are plummeting, and debts of hundreds of millions of dollars are coming due.

“Obviously right now it’s a polarizing brand. There are people that really bought into it, and people who absolutely despise it. You would have to consider all the new facts,” said intellectual property attorney Fabrizio Lolliri, global head of transfer pricing at Hogan Lovells LLP. “There are a lot of variables, and it’s not pure math where two plus two equals four.”

“I think people are going to run from this brand,” Rettew said. “And the people who go for it: Are they going to pay a high price based on what he believes the brand represents?”

The Trump Organization didn’t respond to a request for comment on this story.

Determining a value for a brand blends objective data with subjective judgments on the most relevant data and business projections, valuation attorneys say. There are several methodologies. But whether a valuation is done for tax or accounting purposes, or to facilitate a sale, you have to show your work and justify your choices, they say.

“You really, really have to have a lot of support for the numbers you have,” said Cristina Espiritu, whose business Sparkvation Consulting does valuations. “It’s really more of an art than a science.”

Brand value can be derived from the cost of developing it, income from licensing it, competitor licensing, and business data, or what’s left after subtracting from the business’ value its more quantifiable assets.

Several estimates can be produced using different methods or estimates of subjective variables to see whether they reach a similar result. They can also indicate how much changing those variables alters the result.

Data on Trump’ prolific brand licensing could in theory provide a window into the brand’s worth. But formulations must take into account all the available information—at the time of the valuation, Lolliri said.

That includes the effects of the Capitol riot on his voters’ passion for him, as well as corporations rethinking their relationships with his brand.

Since the riot, Trump has been kicked off social media, longtime lender Deutsche Bank led a group that cut ties with him,, and the PGA of America canceled plans to host the 2022 PGA Championship at the Trump National golf course in New Jersey. Some owners of condominiums at Trump Palace in New York are trying to get his name removed from the building, according to Bloomberg News.

Former Trump attorney Michael Cohen provided Congress documentation that Trump used a $4 billion brand valuation to justify a jump in his stated net worth during his 2014 unsuccessful bid to by the NFL’s Buffalo Bills.

The document provided by Cohen—who by then had pled guilty to lying to Congress on Trump’s behalf—said his net worth grew from $8.7 billion to $4.2 billion. Trump’s presidential campaign estimated the brand to be worth $3.3 billion in 2015 “for real estate licensing deals, brand and branded developments.”

Neither documentation showed its work at the time, and his presidency undoubtedly has had an effect since. His hotels and golf courses already had seen downturns during his time in office before the Covid-19 pandemic brought travel to a halt for the entire industry. 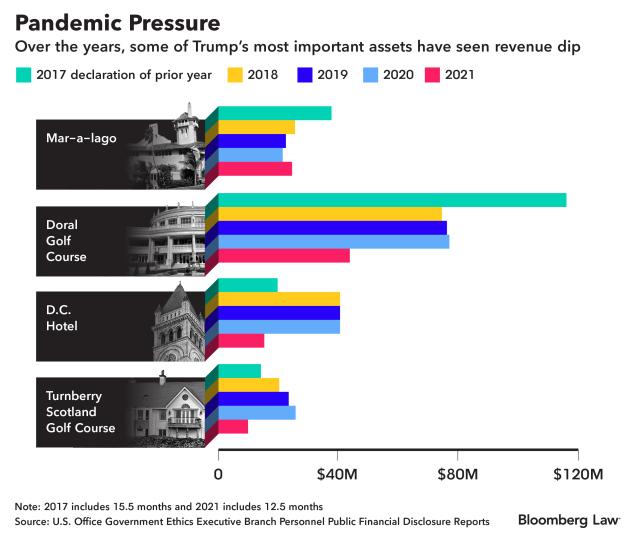 In his final financial disclosure statement as president, Trump reported that income for his businesses fell to between $273 million and $308 million during 2020 and the first 20 days of 2021, as revenue plummeted at many of his most prominent properties. In 2017, he reported making more than $528.9 million over the prior 15 1/2 months, including his first three months as president.

Brand values are difficult to pin down even under ordinary circumstances. A rule of thumb is one to three times revenue, but it depends on factors including whether the name would still hold its value if owned by someone else.

Even within the same industry, competitors’ brand calculation methods can vary considerably. Apple may rely more on its trademark and brand than others relying more on technology itself, Lolliri said. In that case, looking outside the industry at a brand that similarly aims to signal a luxury brand and lifestyle—like fashion designer Chanel—may be more illustrative, Lolliri said.

Name recognition is a big part of brand value, and Rettew noted that Trump’s brand is more well-known than ever. But even before the riot, years of scrutiny of his past business ventures increased awareness of “a graveyard jam-packed with failed ventures” bearing his name, Rettew said.

He added that some of Trump’s 74 million voters may have been turned off by the riot, or were voting against Democrats rather than for the man and his name.

“That makes the value of the brand questionable at best. What does the brand stand for?” Rettew said. “When you go to the voting booth, people don’t see what you’ve done. When you buy a brand, people see it and it makes a statement.”

Trump’s brand isn’t the first to face a public relations crisis, including brands heavily associated with one person.

Forty years after Coco Chanel died, a 2011 book revealed that she had collaborated with Nazis during World War II. But by then Karl Lagerfeld had become the face of the company. That contained the damage, showing the ability of a personal brand to overcome severe controversy, Lolliri said.

Trump’s brand, though, is more difficult to separate from its political implications, Lolliri said.

“The horse is really out of the barn here. There have been too many assaults from different angles on the brand and its reputation,” Talley said, referring to the hospitality industry in particular.

Brand value can also vary by industry. Espiritu said it’s hard to envision anyone in Hollywood or other liberal-leaning media industries agreeing to work with him.

But Trump has also floated the possibility of starting his own political media outlet, which would probably bring in audiences of millions. That may be “more aligned with the value of the brand, where it is now,” Talley said.

There’s also the proven Trump brand resilience, which may be as unprecedented as the new obstacles it now faces.

“People forget, too; people are so fickle,” Espiritu said. “During the presidency, his hotels took a hit. What he was doing was in people’s faces. As he steps back and it settles down, eventually people forget.”