Companies such as sunglasses maker Oakley are turning to multi-defendant design patent suits as sellers of fake goods become more sophisticated in their own tactics.
Photographer: Chip East/Bloomberg

Oakley Inc., Fitness Anywhere LLC and other companies are leaning into design patents to fight knockoff products coming across the U.S. border.

A series of patent infringement lawsuits have been filed in recent months against overseas importers accused of selling fake goods from China and other countries. The suits target numerous entities—in one case over 300—that sell merchandise in online marketplaces operated by companies like , , and .

The multi-defendant complaints resemble anti-counterfeiting suits that companies have long filed over trademarks. But attorneys said it’s relatively new for companies to use the approach with design patents, which protect how a product looks, to combat the threat of knockoffs to their brands. 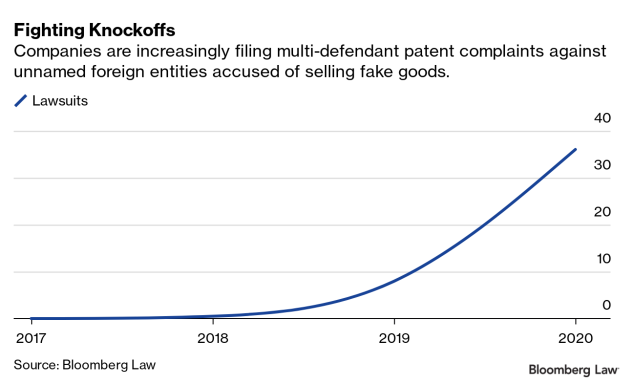 Companies are turning to the strategy as sellers of fake goods become more sophisticated in their own tactics. More importers are shipping knockoffs into the country without logos, increasing the odds they escape seizure at the border and making it tougher to bring a trademark lawsuit.

“What was previously done under the counterfeiting statute, now brand owners are looking for new ways,” said Elizabeth D. Ferrill, a partner at Finnegan Henderson Farabow Garrett & Dunner LLP in Washington. “One of those ways” is this “multi-defendant lawsuit strategy.”

There are hurdles in the strategy. The biggest one for companies is figuring how to make the connection required under patent law to join numerous defendants in a single lawsuit.

Trademark owners commonly sue a large number of overseas defendants in a single case, then quickly move for a restraining order. The names of the defendants can be hidden in the complaint, so importers can’t move assets around before a court can order their accounts frozen.

In some cases, the plaintiff’s name may even be secret.

Oakley Inc., the California eyewear maker, has been the most active, filing complaints over patents covering the design of sunglasses. Companies like Fitness Anywhere, which makes TRX suspension training, and UGG maker , have also taken the approach.

Sellers are also frustrated when importers ship knockoffs into the U.S. that look like the existing product but logos and labels that would infringe a trademark are left off, Ferrill said.

Companies including and have thrown their support behind legislative efforts to allow U.S. Customs and Border Protection to seize goods believed to infringe design patents. CBP already has that authority when it involves goods that infringe copyrights and trademarks.

“It’s an evolving game,” said John Strand, a shareholder at Wolf Greenfield & Sacks PC in Boston. “Each party has to continually adapt what tools they’re using to play the game in their best interest.”

Companies have become more focused on obtaining design patents to protect their brands, Kelly said. A high-profile legal battle between and over design patents contributed to that trend. The case, which reached the U.S. Supreme Court in 2016, illustrated the potential value of the patents.

The number of applications for U.S. design patents has increased every year since 2014, according to U.S. Patent and Trademark Office statistics. In 2019, there were nearly 47,000 applications, up 23% from five years before.

Once companies “obtain the design patents, then their thinking shifts to how to monetize or enforce design patents in order to protect their ornamental design,” Kelly said.

There can be hurdles for patent plaintiffs in multi-defendant cases.

It generally isn’t worth the money to file a lawsuit against a single knockoff seller, making it essential that companies be able to group numerous defendants together, attorneys said. The 2011 America Invents Act raised the bar for joining multiple defendants together in a single patent lawsuit.

Under the law, companies contemplating a patent suit need to be able to show a relationship between the defendants in order to group them together—such as when products come from the same factory, or a single entity masks itself as multiple sellers.

“They’ve figured out those connections and now it’s a cost-effective activity to go to district court,” Ferrill said.

Oakley in a complaint filed this month alleged the defendants were an “interrelated group of infringers” who operate online stores under different aliases. It also cited data that counterfeit and pirated goods account for billions in economic losses.

Trademark law provides a clear damages number: no less than $1,000 or more than $200,000 per counterfeit mark per type of goods. The cap increases to $2 million when the infringement was willful. There are no statutory damages for design patent infringement, so damages must be proven.

In June, an Illinois federal judge entered judgment for Oakley, and put each defendant on the hook for $100,000 in damages. The court ordered the defendants’ accounts frozen, and any money in them transferred to Oakley.

In the months since, Oakley has filed notices with the court indicating it has recouped the full award from two defendants.

The trademark lawsuits haven’t stopped. Oakley and its parent, , have filed several anti-counterfeiting complaints this year. Strand many companies also continue to work with Amazon and other online marketplaces in an effort to reduce the number of knockoff products on their platforms.

“Companies are trying to use every tool in their toolbox to go against potential counterfeiters,” Strand said.