‘s Google, , and ‘s strategy of asking the Federal Circuit to curb the patent office’s use of a rule that makes it harder to invalidate patents fell short, after the court ruled it lacks jurisdiction to hear several appeals.

The companies had argued Patent Trial and Appeal Board precedent on instituting patent review trials when parallel litigation is pending oversteps both patent law and the Administrative Procedure Act. Similar challenges by and and another case filed by Apple are still pending.

The U.S. Court of Appeals for the Federal Circuit quickly disposed of eight of the 16 appeals Friday, rejecting the tech companies’ arguments that these cases raise extraordinary issues that it needs to resolve.

“Such challenges, both procedural and substantive, rank as questions closely tied to the application and interpretation of statutes relating to the Patent Office’s decision whether to initiate review, and hence are outside of our jurisdiction,” the court said in a nonprecedential order.

The decision didn’t come as a surprise to patent litigator Rachel J. Elsby, given the recent Supreme Court case Thryv Inc. v. Click-to-Call Technologies LP putting the decision on whether to institute “solely within the board’s discretion.”

“At this point, IPR petitioners will likely need to find a way to maneuver the Fintiv factors or seek congressional intervention,” Elsby, a partner in Akin Gump Strauss Hauer & Feld LLP’s Washington office, said in an email.

Several of the same companies have sued the patent office in federal district court to block what they call the Fintiv rule. They’ve also asked Congress to investigate whether the PTAB exceeded its authority by making the rule binding without going through formal rulemaking. The agency recently asked for public comments on new rules codifying the analysis for instituting an inter partes review when parallel litigation is underway.

The Federal Circuit could have provided another avenue to attack the rule. If the court had taken the appeals, it would have shed light on just what actions by the board are beyond the court’s power to review, as institution decisions are generally unappealable. The companies argued they weren’t just appealing the denial of institution in their cases, but broader issues of how the agency adopted the Fintiv framework.

The 2011 America Invents Act, which created the IPR process, bars Federal Circuit review of decisions on whether to institute IPRs. The Supreme Court’s April decision in Thryv extended that prohibition to questions closely related to institution.

But Thryv only limited the Federal Circuit’s jurisdiction over “ordinary disputes” about “institution-related statutes,” patent litigator Christopher E. Loh of Venable LLP in New York said. These appeals gave the Federal Circuit an opportunity to “shed light on threshold questions,” he said in an email.

Those threshold questions included whether the Federal Circuit thinks PTAB precedential decisions give rise to extraordinary disputes, what specific sections of the AIA the Federal Circuit considers to be “institution-related,” and whether arguments that the PTAB exceeded its authority or violated the APA can overcome express limits on appellate review, Loh said.

The Federal Circuit ordered Google, Cisco, and Apple to show cause why their appeals shouldn’t be dismissed for lack of jurisdiction. In response, the companies argued the patent office created new institution standards not rooted in the AIA and exceeded its authority by doing so without allowing for notice and comment.

Four tech industry trade groups filed friend of the court briefs in support of Google and Cisco. The opposing parties and the patent office argued these are simply institution decisions not subject to judicial review.

Cisco had also filed a backup mandamus petition challenging the rule in case the Federal Circuit found it doesn’t have jurisdiction to hear a direct appeal.

But the Federal Circuit rejected that argument, too. It denied the mandamus petition Friday, saying, “Cisco has not met the high standard for mandamus relief.” The court cited the other avenues Cisco is pursuing, such as the district court case, as proof it “clearly has a readily available alternative legal channel to raise its arguments concerning the validity of the asserted patents.” 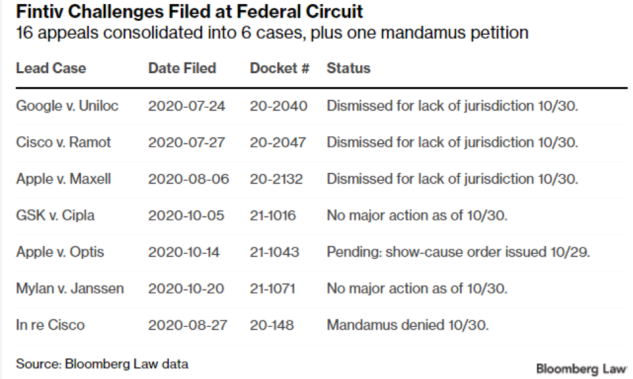 The appeals faced tough odds at the Federal Circuit, given the bar on judicial review.

Rodkey had thought the amicus briefs showing interest from the patent community “might pique the Federal Circuit’s interest.” But they weren’t enough to sway the court.

Upcoming rulemaking was also likely to trip up the appeals, Elsby said.

The argument that had the best chance for review is that the agency engaged in improper rulemaking when it adopted the Fintiv factors as a precedential test for denying institution, she said. But the Federal Circuit appeared skeptical that the board’s adoption of the Fintiv rule amounted to improper rulemaking.

“Even if a district court is more receptive, that argument is likely to be moot given the PTO’s recent request for comments on the Fintiv factors,” she said.

Apple Inc. v. Fintiv Inc., which the agency made precedential in May, lays out a list of six factors for PTAB judges to balance when considering discretionary denial of institution because of parallel infringement litigation in district court.

The factors include how far along the court proceedings are, whether the court case might reach trial before the PTAB’s deadline for a decision, and whether the cases involve the same parties and same arguments. The focus is on efficiency, fairness, and avoiding duplicative or conflicting decisions.

The question for the Federal Circuit was whether the agency can set up this type of rule via precedential decision without formal rulemaking, Rodkey said. The appeals tried “to define the bounds of administrative law for setting these types of frameworks within the agency,” he said.