A pharmacy in Macao, an administrative region of China. China will implement a new drug patent law on June 1 as part of a drive to improve intellectual property protection.
Photographer: Justin Chin/Bloomberg

China is changing its patent law with an eye toward ramping up legal protections for drug manufacturers, building on the country’s efforts to bolster its intellectual property system.

The country is establishing a new system for brand-name manufacturers and generics makers to resolve patent disputes under the changes, which take effect June 1. China also will allow extensions of patent terms for such things as delays at the patent office.

Changes to the litigation system could provide more incentives for large drug companies to enter the Chinese market by boosting procedural protections, attorneys say. Drugmakers have been skeptical in the past about their ability to protect brand-name products against unfair competition in China.

Drugmakers around the world are watching to see how the new system shapes up, according to Bruce Wexler, global co-chair of the Intellectual Property practice at Paul Hastings LLP.

“The idea that you can strengthen an IP system is of interest,” Wexler said. “I don’t think it’s a coincidence that countries with strong, robust IP laws have significant innovation.” 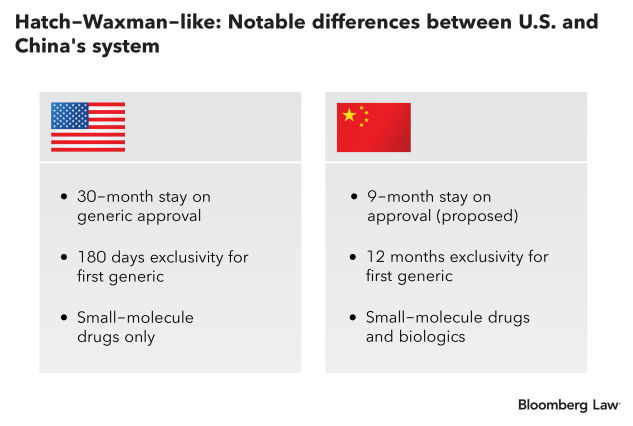 The changes to the system for drug patents are part of a “general trajectory of trying to align Chinese IP laws with international standards,” Mark Deming, an intellectual property attorney and shareholder at Polsinelli PC in Chicago, said.

China will establish a patent linkage system resembling the framework established by the Hatch-Waxman Act of 1984, which created the modern U.S. regulatory framework. It will provide a process for branded companies to challenge copycat medicines early, which could reshape patent litigation in China.

There will also be a platform for registering patent information, similar to the U.S. Orange Book.

“They are treating IP more seriously than they did historically,” Deming said. “That’s increasing the incentives for companies to invest in China, to bring their innovation into China.”

China agreed to make the changes as part of a broader 2020 trade agreement with the U.S.

Under the new Chinese system, brand-name drug makers will be able to sue before a generic launches its product.

Companies often have been left playing catch-up after the generic’s launch. Even if the branded company wins, attorneys said there can be market impacts and significant price consequences.

The new system also provides generics with an opportunity to challenge the validity of drug patents during the approval process. That could take some of the risk out of the equation before a generic goes to market, attorneys said.

“I don’t think it’s going to change whether any particular patent is valid or invalid, or a particular drug is going to be found to infringe or not infringe,” said Sarah Chapin Columbia, a partner at McDermott Will & Emery LLP in Boston.

“But I think it’s going to be very helpful, particularly to the branded companies, to have a procedural mechanism that allows that to play out without the risk of a generic just flooding the market,” she said.

“They want to be pragmatic,” said Delphine Knight Brown, a New York partner at Freeborn & Peters LLP. “They want good patents to have value, and they want to have a better enforcement mechanism and for things to move quicker.”

There are still some significant differences between the U.S. and Chinese systems. Unlike the Hatch-Waxman framework, which only includes small-molecule drugs, China’s system includes biologic medicines.

Another difference is that in the U.S. there is an automatic 30-month stay on regulatory approval once a lawsuit is filed. China has proposed a stay of nine months.

Some attorneys doubt that Chinese courts can resolve infringement or validity issues that fast. That is one of the lingering questions about how effective the system will be.

“If they aren’t able to issue decisions on those issues at the nine-month mark, then this change to Chinese patent law might not necessarily be the panacea that innovator companies are looking for,” Christopher Loh, a partner at Venable LLP in New York, said.

Another change allows drug makers to seek a patent term extension for delays in the patent office or in approval of drug products by Chinese regulators. Similar extensions are available in Europe and the U.S., where up to five years can be added to the life of a patent.

“They’re trying to give innovators with solid patents the value that they deserve,” Brown said.

For a valuable drug product, extra time can translate into millions of dollars.

“Five years in the drug world is a big deal,” Columbia said.

The first generic maker to successfully challenge a brand-name maker’s patent and obtain regulatory approval will have a 12-month period in which they are protected from competition from other generics, as opposed to a 180-day exclusivity period in the U.S.