U.S. cannabis businesses are racing to lay claim to patent and trademark protections, even though they lack federal intellectual property rights.

The PTO has issued more than 500 cannabis-related patents since 2000, according to Bloomberg Law data. The patents broadly cover marijuana-related plant strains, chemical formulations, medical treatments, and devices to make and consume cannabis products.

The federal illegality of marijuana means the industry lacks clarity over how their intellectual property rights will hold up if challenged in federal court.

“We believe not only state IP laws but also state competitive fairness and competition laws are very good avenues in the meantime before the federal question gets answered,” James Whitcomb, chief financial officer of Surterra Holdings, which sells cannabis-based medical treatments in Florida and Texas, said.

Robust federal trademark and patent rights instead of a patchwork of state protections could help the fast-growing industry expand further and fend off global competition, Shea said.

They “should have IP enforcement programs and set themselves up for the oncoming decriminalization and possible legalization on a federal level,” she told Bloomberg Law. 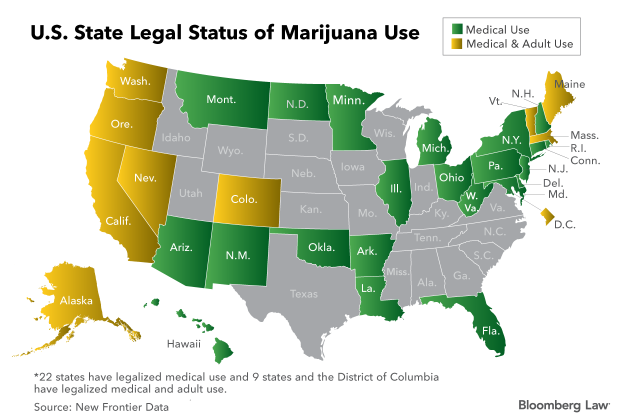 Canndescent’s cannabis formulations, which Sedlin says make up the company’s bread-and-butter sales, can’t register U.S. trademarks. He said he worries if someone in Canada, which is on track to legalize marijuana in mid-October, may snag a trademark on “Canndescent.”

Cannabis businesses also are entering co-branding partnerships with trademark-holding companies, Shea said. A cannabis company can team up with a craft brewing company such as Heineken unit Lagunitas to market pot-based beverages, for example. “You can piggyback off someone else,” he said.

But businesses have to be careful when using trademarks for edible products, Brand & Branch’s Malek said. A company that sells chocolate with cannabis alongside chocolate without cannabis, for example, shouldn’t stick to the same trademark on both for consumer safety reasons, she said.

“The deeper problem is that we don’t even know how a proceeding might look in federal district court when a cannabis company is a plaintiff and if they’re relying on their rights having to do with their cannabis goods and service,” Malek said. “That is ambiguous and possibly absent for us and that makes enforcement and efforts at consumer protection complicated in this industry.”

The U.S. patent office approves cannabis-related patents as long as they are new and useful.

The patent office faces some challenges when reviewing a cannabis patent applications, attorneys say. There is limited information available on prior inventions and already-known information when it comes to the emerging cannabis industry, Cynthia Hardman, a partner at Goodwin Proctor LLP told Bloomberg Law.

By comparison, with a typical pharmaceutical patent, a patent examiner can comb through databases on previous inventions recorded in scientific and medical journals, prior patents, and other sources.

“The patent office may issue patents that have a hidden invalidity problem,” Hardman said. “That, in fact, the subject-matter was known and in use before the patent application,” she said, referring to cannabis-related inventions.

Cannabis-related patent applications with claims to a marijuana plant are treated the same way as any other plant, patent office spokesman Paul Fucito said.

“No special statutory requirement is applied for medical use of cannabis,” Fucito said. “The application is treated like any other application.”

Legal experts also are concerned that the patent office may be granting overly broad patents for cannabis. A patent with large percentage of cannabinoids and oils that give cannabis its distinctive smell may cover a variety of strains that others may want to patent, Doug Fischer, chief legal officer of the National Association of Cannabis Businesses, said.

“If it’s too broad it will stifle competition,” Fischer said. His association is a self-regulatory group that creates voluntary standards for the cannabis industry, such as those for advertising and financial transparency.

“In the pharmaceutical space, we went through a generation of overbroad patents that resulted in a great deal of litigation, and my hope is we’ve learned from that,” Rep. Matt Gaetz (R-Fla.) told Bloomberg Law. Gaetz introduced a bill in April that would increase the number of federally approved cannabis manufacturers for medical marijuana research.

Counseling cannabis clients is a challenge, IP attorneys say, because the federal ban limits enforcement of cannabis trademarks and patents, and disparate state laws can snarl litigation across state lines.

Different U.S. states have separate laws on who can own a license to cultivate or manufacture cannabis, Brand & Branch LLP partner Amanda Conley told Bloomberg Law. “It really makes state-by-state licensing feel like a global licensing project, where it almost feels like different countries.”

Goodwin Procter’s Hardman said she has been noticing an uptick in patenting activity in the last couple of years, signaling that federal litigation is “percolating on the horizon.” But cannabis companies will hesitate to admit details on their activities, legal in certain states but illegal under federal law, in court as evidence, she said.

The patent office’s administrative review board has said it will hear Insys Development Co. Inc.'s challenge to GW Pharma Ltd.'s patent on the use of cannabidiol to treat seizures.

Both companies make treatments using chemical cannabinoids found in marijuana. The decision would clarify how cannabis patents can be enforced at the Patent Trial and Appeal Board, which hears patent challenges.

Cannabis company executives say they wanted to be treated like any other company in the U.S when it comes to intellectual property rights.

“The concern is that we, like every other cannabis company in the U.S., cannot access at this point full IP and trademark protection to the extent that almost every other company can, Acreage’s Doherty said. “That being said, we do take efforts in state-by-state protections.”

(Corrects name of law firm to Brand & Branch LLP in the 11th, 17th and 29th paragraphs)

To contact the editor responsible for this story: Rebecca Baker at rbaker@bloomberglaw.com