California’s cannabis has a world-class reputation, and the state wants to make sure the multibillion-dollar pot crop gets the formal name recognition and respect it deserves.

To acknowledge appellations and terroir—the distinctive soil and climate conditions in a geographic area that give flavor and depth to cannabis buds just as they do to cabernet sauvignon grapes—state regulators are drafting rules for the world’s largest marijuana market.

“Terroir is everything. Terroir is what appellations of origins is about,” said Eric Sklar, cofounder and board member of the Napa Valley Cannabis Association and former vice chair of Napa Valley Vintners. Sklar grows cannabis in Lake County north of Napa.

And because there are no federal intellectual property protections for cannabis, the nation and the world will look to California for a template on how to protect place names and identity.

Two years ago the state Department of Food and Agriculture established county-of-origin requirements for cannabis based on county boundaries. The separate state appellation plan would designate specific areas that cross county lines, similar to those used to identify wine grape-growing regions in California. Some regions command a price premium for their cannabis, much as certain grapes grown in appellations such as Napa’s Howell Mountain or French wines carrying the Grand Cru ranking fetch higher prices for their crops. 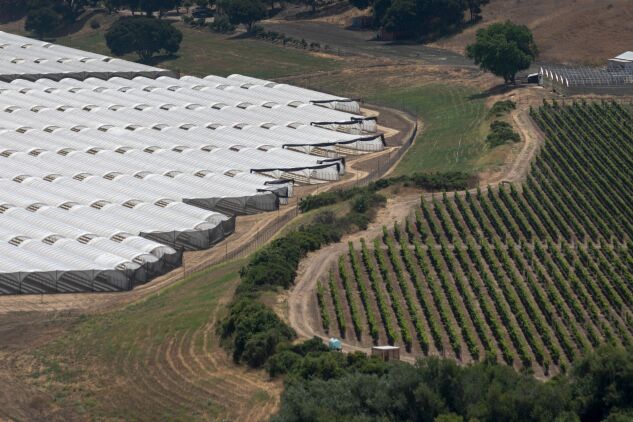 Legacy pot growers from the Big Sur coast to the redwood hills of Trinity County to the Sierra Nevada mountains foothills say that because their expertise in being purveyors of craft cannabis already means something in the world, they want their decades of hard-earned reputational excellence and years of dodging the law not to be sullied by sellers who claim their pot comes from somewhere it doesn’t.

“For more than half a century, hidden in the creases of the wild and rugged Santa Lucia Mountains, farmers in Big Sur have eked out a living growing some of the most esteemed cannabis in hopes of someday they would not fear arrest,” said Oliver Bates of the Big Sur Farmers Association, who grows cannabis in Monterey County. He was speaking at a May 6 public hearing of CalCannabis Cultivation Licensing, a division of the California Department of Food and Agriculture that’s reviewing comments on its proposed regulations.

The growers support appellations based on terroir to legally “put our prestigious products on the world stage someday” Bates said, and to reflect single appellations like in other industries, including wine, coffee, tobacco, and chocolate.

California’s pot market is lucrative, with sales last year of $2.96 billion. The market is expected to reach $3.7 billion in sales this year and $7.13 billion in 2024, according to a forecast by BDSA, a cannabis market analytics company. Worldwide pot sales last year totaled $14.9 billion.

The state also has a vested interest in protecting pot’s reputation. California cannabis, both recreational and medicinal, generated $395.4 million in taxes in 2018 and $629.2 million in 2019, the Institute on Taxation and Economic Policy said. California cannabis sales accounted for one-third of the $1.9 billion in tax revenue raised nationwide last year, according to a March 10 blog post by Carl Davis, research director for the nonprofit, nonpartisan think tank.

State voters legalized medical marijuana in 1996 and recreational use in 2016. Cannabis is illegal under federal law so producers can’t seek intellectual property protections through the U.S. Patent and Trademark Office. Federal law, however, doesn’t prohibit California from enacting statewide protections. All told, 11 states and the District of Columbia have legalized recreational pot. A total of 33 states, the District of Columbia, Guam, Puerto Rico, and the U.S. Virgin Islands have approved medical marijuana, according to the National Conference of State Legislatures.

Cannabis appellations were built into California’s initial regulations “so this has been a long time coming. The state appears to simply thumb its nose at federal regulations on this point,” said Erin Carlstrom, a cannabis attorney with Kelly, Carlstrom & Noble in Santa Rosa, Calif. She noted that in California, like other states that have legalized some form of cannabis use, “we haven’t seen any pushback.”

California in 2017 acknowledged the federal prohibitions and told the cannabis industry it could protect itself by using state law to register trademarks and service marks with the Secretary of State.

“Anything that sets California apart is good for the industry as a whole,” said Nicole Howell, a San Francisco cannabis attorney with Clark Howell.

The California wine industry is concerned that cannabis growers will want to adopt existing wine-growing appellations. The nonprofit San Francisco-based Wine Institute and associations representing the majority of California’s wine and wine-grape production that sold $40.2 billion worth of wine in 2018 oppose sharing the federally designated American Viticultural Area (AVA) names with cannabis. California’s AVAs include Sonoma, Monterey, and Mendocino.

“Given the renown of certain wine AVAs, some cannabis growers might be tempted to appropriate the consumer good will associated with those AVA names,” the wine growers said.

But just as the wine industry must do for the federal government, those wishing to establish a cannabis appellation under the California proposal would have to show what makes a particular growing area distinct.

“We’re not trying to take any position that would take anything from wine. In fact we’re trying to figure out a way to complement” the wine growers next door, said Heather Burke, a Nevada City, Calif., attorney with Origin Group Law LLP whose clients include second- and third-generation cannabis growers.

Final regulations and their scheduled Jan. 1, 2021, implementation date could get pushed back because of the coronavirus pandemic. The state in March extended the comment period by 45 days to May 6 for the same reason.