After a government appeals board cut down two of M. David Hoyle’s patents, the Georgia inventor began to wonder whether the deck was stacked against him.

At issue was the Patent Trial and Appeal Board, commonly known as PTAB. Its judges consider challenges to existing patents, like Hoyle’s.

Looking into the review board, a part of the Patent and Trademark Office, Hoyle became aware of a practice that he found stunning: Patent judges get bonuses, which can range as high as $36,000, according to one study. And bonuses typically are based, in part, on the number of cases they review, not just the quality of their decisions. 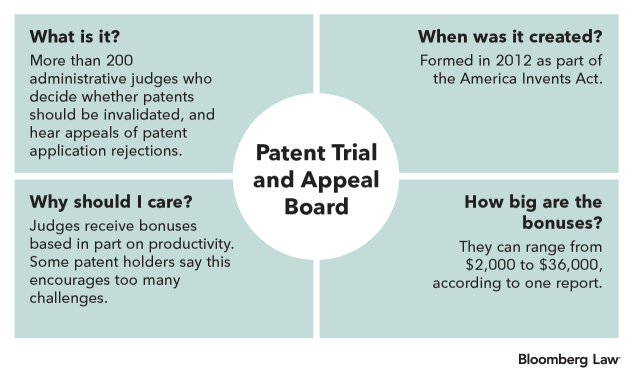 The patent office declined to discuss the bonus structure. But some patent holders argue that the system incentivizes higher production—leading to more trials and forcing patent owners to spend more time and money defending against weak challenges.

While defenders of the system say the argument is baseless, the bonuses are coming under increased scrutiny with concern they may corrupt the patent review process. At least two companies are arguing in federal court that the system is inherently flawed.

Bonus Based on Performance

Congress with the 2011 America Invents Act created new programs for companies to challenge the validity of issued patents, and the PTAB to oversee them. The intent was to have a faster, cheaper alternative to district court litigation for validity decisions.

The board and its reviews have been widely used, and are particularly popular among major technology companies. Over 12,000 petitions for review have been filed, many of which have come in response to infringement allegations.

Judges usually agree to review a patent. In fiscal year 2019, the board instituted trial at a 63% rate, which was consistent with recent years.

The success of challengers in taking down patents at the PTAB has upset many patent owners. Allergan PLC went so far as to pay a Native American tribe to take ownership of its patents in a failed attempt to shield the patents from board review on sovereign immunity grounds.

Critics of the bonus system emphasize neither district court judges nor administrative law judges (ALJs), like those at the Securities and Exchange Commission, receive bonuses. “Non-ALJ judges” in a number of other agencies do—though none gets bonuses as generous as those awarded at the PTAB, according to one 2018 study. 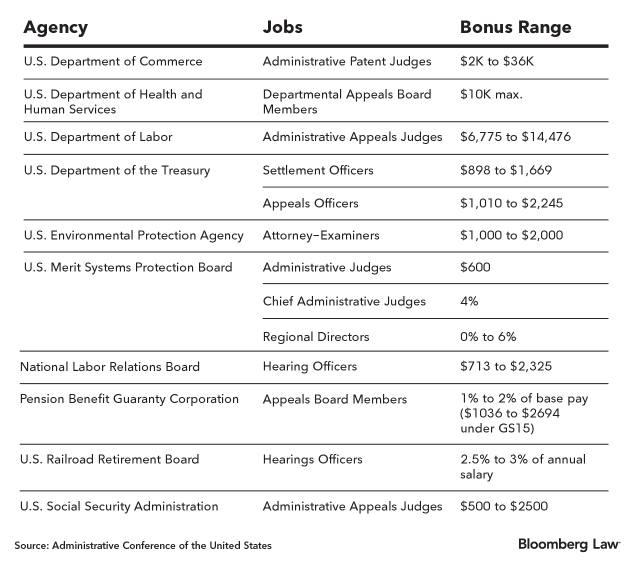 Documents, obtained through a public records request made by advocacy group US Inventor, show that judge bonuses are tied to annual performance reviews. Salaries—which ranged from $164,500 to $176,900 in 2019—can also get a 5% bump based on judges’ review scores.

Reviews are most heavily weighted on work quality and production. Production is measured in terms of “decisional units,” PTO documents show. The typical judge needs at least 84 units to be bonus eligible.

How unit credits for decisions, orders, and other documents in patent validity reviews are tallied is murky. PTO documents indicate credit is “assessed on a case-by-case basis, based on the complexity of the proceeding.”

The upshot of the system, some argue, is that it helps create a perception that PTAB judges’ decisions are influenced by factors other than the merits of a challenge.

“Inventors’ patents are at stake, and patent challengers pay a lot of money for the process. We can’t have process where they think a decision is based on financial incentives,” Matthew Dowd of Dowd Scheffel PLLC in Washington said.

In Hoyle’s view, the bonuses are “offensive,” and the patent office’s review factors vague, creating the potential for the system to be gamed in favor of challengers.

His patents, which cover targeted advertising technology, were challenged by tech giants like Microsoft Corp. and Google. This followed a series of infringement lawsuits that Hoyle’s company, B.E. Technology, filed against them and others.

The PTAB invalidated claims in both patents in 2015, finding they were anticipated or obvious. The decisions were affirmed by the U.S. Court of Appeals for the Federal Circuit.

New Vision Gaming & Development Inc., which also had patents axed at the PTAB, is arguing in a Federal Circuit case that the PTAB salary and bonus arrangement contributes to a structural bias that violates due process. Dowd is one of the attorneys for New Vision. Mobility Workx LLC, the owner of wireless communications patents, has made similar arguments in court.

“Congress created an administrative tribunal and directed it to cancel patents without building into this agency any structural limits that would bind it to respecting the rights of patent owners,” Mossoff, the George Mason law professor, said. “This is just one more example, a very stark example, of a serious due process concern at the PTAB.”

US Inventor conducted a study that it says shows PTAB judges institute more “questionable” reviews in October—the month their performance review cycle begins—as compared to September. The group called this the “October effect,” and suggested it might be attributed to judges wanting to “stuff the pipeline” with cases for the year.

Others say the argument is flawed.

“It shows a profound misunderstanding of where the real balance of work at the board is,” said Richard Torczon, who was an administrative patent judge for almost two decades before joining Wilson Sonsini Goodrich & Rosati.

In addition to validity trials, PTAB judges oversee appeals of patent office examiners’ rejections of applied-for patent claims. Judges who want additional work can review additional examiner rejection appeals, he and other former agency employees said. While the backlog of such appeals has declined in recent years, patent office statistics show there are still over 7,000 pending.

A. Christal Sheppard, previously a director of the PTO’s Midwest regional office, said the argument that PTAB judges are incentivized by bonuses to institute more reviews “makes no sense.”

“I could see how someone on the outside would think it’s a way for them to pad their paychecks,” Sheppard, now a professor at University of Nebraska-Lincoln College of Law, said. “The question is how fast can you get through the work. And the PTAB judges are already at a disadvantage with the twelve-month deadlines, so I cannot imagine them working to get more cases.”

PTAB judges have 12 months from instituting trial to issue a decision.

Bonuses aren’t uncommon in some parts of government. In fact, there’s a “huge swath” of non-administrative law judges among whom bonuses are “pretty prevalent,” said Melissa Wasserman, a University of Texas at Austin School of Law professor.

Over 70% of non-ALJs by type that were subject to performance reviews were eligible for bonuses, according to a report prepared for the Administrative Conference of the United States.

Kent Barnett, a University of Georgia School of Law professor who helped conduct a 2017 survey of agencies that formed the basis of the report, said the PTAB contained “the highest bonus of any kind that was reported to me.”

Yet how agencies determine their bonuses is “a bit of a black box,” Barnett said, with the Office of Personnel Management being “a bit vague about how they’re determined.”

“We don’t even know what the average is,” Barnett said.

Barnett said that the patent office reported that it had a “peer review” system. When he asked whether the agency “had precautions in place to prevent impartiality,” the agency reported that bonuses weren’t related to adjudication outcomes, and therefore impartiality wasn’t implicated.

Arti K. Rai, a professor at Duke Law School and administrative law expert, doesn’t think PTAB bonuses are a constitutional problem, but said the system may not be a good idea as a policy matter. This is especially true, she said, when combined with a 2019 Federal Circuit ruling that stripped patent judges of firing protections.

There could be another avenue for problems in how the PTAB is designed, according to John Whealan, a former deputy general counsel for intellectual property law and solicitor at the patent office. Judges decide how many trials to hold per year, and the higher the institution rate, the more popular the PTAB is, he said.

“You’re allowing the PTAB itself to control how popular it is,” said Whealan, who is now associate dean for IP law at George Washington University Law School. “If you allow any government institution to control the amount of work they’re going do, and how popular they are, that can lead to problems.”

As for Hoyle, he might not have made his last appearance in front of the PTAB.

B.E. Technology earlier this year filed new infringement lawsuits against Google and Twitter Inc., over different patents on advertising technology. Hoyle is digging in for a fight.

Google has “made billions upon everybody else’s technology,” he said, while arguing the patent office rules “in favor of the big corporations against the little guy.”