Supreme Court nominee Amy Coney Barrett brings a considerable paper trail from 18 years as a University of Notre Dame law professor and then judge on the U.S. Court of Appeals for the Seventh Circuit since 2017.

Her academic writings and 100 opinions and six dissents as a judge give some clues about how she approaches issues such as gun rights, criminal procedure, judicial restraint, and how judges should approach precedent.

Stare decisis, the legal principle that judges should respect precedent, is certain to be a focus at her Senate Judiciary Committee confirmation hearings for Democrats concerned she could provide the vote to overturn Roe v. Wade.

Here’s a sample of her writings that might foreshadow how she would rule on issues likely to come before the Supreme Court.

Four cases she authored on criminal procedure and qualified immunity show Barrett “isn’t a knee-jerk protector of the government in terms of law enforcement, or a knee-jerk ruler for the criminal defendants,” Ilya Shapiro, director of the Cato Institute’s Robert A. Levy Center for Constitutional Studies, said.

In Torry v. City of Chicago, Barrett sided with officers in finding a traffic stop reasonable even though the officers a year later didn’t remember stopping the suspects. In Rainsberger v. Benner, she wrote that a detective who lied to get arrest warrant isn’t entitled to qualified immunity.

“Of course, a competent officer would not even entertain the question whether it was lawful for him to lie in a probable cause affidavit,” Barrett wrote in Rainsberger. “The hypothetical officer in the qualified immunity analysis is one who acts in good faith.”

In United States v. Terry, she found that police didn’t have the authority to search a suspect’s apartment because they failed to verify that the woman who let them in lived there. “The officers could reasonably assume that the woman had spent the night at the apartment, but that’s about as far as a bathrobe could take them,” Barrett wrote.

In United States v. Watson, she agreed with a suspect that the police didn’t have a reasonable suspicion to block his car based on an unreliable tip.

These cases show Barrett is “open minded” and willing to rule against the government, Eric Segall, a law professor at Georgia State University, said. She’s likely to be more like the late Justice Antonin Scalia, for whom she clerked, than Justice Clarence Thomas on criminal procedure issues, he said. 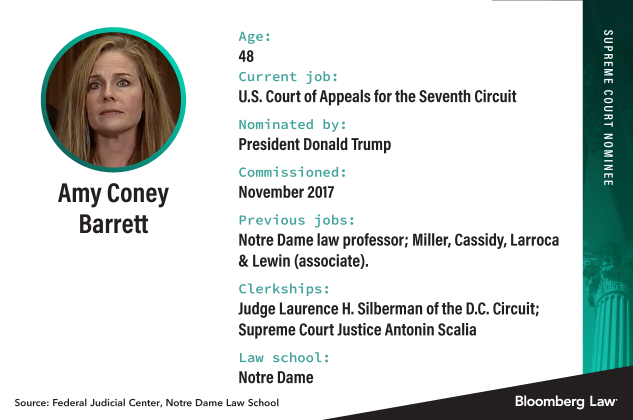 “Stare decisis is a sensible rule because, among other things, it protects the reliance interests of those who have structured their affairs in accordance with the Court’s existing cases,” Barrett wrote in the 2017 article Originalism and Stare Decisis. “But what happens when precedent conflicts with the original meaning of the text?”

Barrett points out that even with the weak presumption that precedent should be followed, courts will never reexamine the vast majority of cases. The simple reason for that is that litigants don’t ask for the courts to review the cases and the courts are disinclined to revisit them on their own, she writes.

Barrett “approaches stare decisis from a practical perspective” in her extensive academic writing on the topic, Saikrishna Prakash, law professor at the University of Virginia, said.

“She doesn’t ever say that the courts should be overturning a bunch of precedents,” Prakash said. “She disagrees with those who want to revolutionize case law.”

Shapiro puts her somewhere between Scalia and Thomas here. “She’s a little more willing than he was to question precedent,” he said. “Maybe not quite as far as Justice Thomas who hardly has any use at all for stare decisis but certainly more than Scalia.”

In a 2016 essay reviewing a book by Georgetown Law professor Randy Barnett, Barrett writes that Barnett is frustrated by what he sees as conservatives’ “misguided attachment to judicial restraint.” Judicial restraint is the theory that judges should limit the exercise of their own power and refrain from striking down laws unless they are obviously unconstitutional.

Barrett argues in favor of restraint saying, “A court does not overstep simply by holding a statute unconstitutional; it oversteps if it does so without constitutional warrant.”

But in the same article, she criticizes Chief Justice John Roberts for doing everything he can to save the Affordable Care Act, Segall said. “Once you say that the court should have struck down the most important statute of the last 50 years, it seems difficult to me to also suggest that judicial restraint might be a good thing,” he said.

The essay shows she’s not like Justice Neil Gorsuch “in questioning every government action, applying heightened scrutiny, and making the government justify its actions all the time,” Shapiro said “There’s some room for democracy and therefore judges defer or apply a looser standard of rational basis review.”

Barrett’s dissent in a gun rights case indicates that she has a “very expansive view of the right to bear arms and would very likely be hostile to gun control efforts,” Second Amendment scholar Adam Winkler of the University of California, Los Angeles, said.

The Seventh Circuit majority in Kanter v. Barr upheld a ban on felons possessing firearms. Barrett’s dissent argued that such laws run afoul of the Second Amendment because there’s no evidence those who commit nonviolent felonies are particularly dangerous.

Gun Owners of American Senior Vice President Erich Pratt said the ruling shows Barrett’s “willingness to examine and apply the Second Amendment as written, by looking at its text and using history as a guide, instead of engaging in the judge-empowering interest balancing that has run rampant in the lower courts.”

Barrett wrote the opinion in A.F. Moore & Assocs. v. Pappas allowing a federal lawsuit to go forward over whether the second-most populous county in the U.S. engaged in discriminatory tax treatment. Illinois’s tax-objection procedures “do not allow the taxpayers to raise their constitutional claims in state court,” she wrote.

The case could signal sympathy from Barrett for taxpayers trying to have their tax challenges heard.

If she’s confirmed and joins the high court before Dec. 1, she will arrive in time to hear arguments in another case dealing with taxpayer access to the courts, CIC Services, LLC v. IRS.

—With assistance from Aysha Bagchi