Puppy toys should have nothing to do with car engines.

But a recent court complaint says halted sales of a “puppy sleep aid” after being told a storefront selling on its marketplace infringed two patents—one registered in 1895, and another directed to a Japanese “combustion device.”

As Amazon expands its reign over e-commerce and gets more aggressive about rooting out counterfeiting, it’s taking a more active role in judging intellectual property disputes between merchants on its platform. But seven court complaints filed by Amazon storefronts since December contend that Amazon frequently removes products or entire storefronts without reviewing infringement complaints in depth, making it easy for unscrupulous sellers to get their competitors eliminated.

“Amazon, with its size, now substitutes for government in a lot of what it does,” said , a First Amendment and copyright law professor at Harvard University. “It is being asked to run a judicial system, without the commitments to transparency and precedent of a real judicial system.”

Counterfeiting in particular has been a major concern for Amazon, and court complaints for false infringement claims are dwarfed by the number of complaints against alleged counterfeiters. Even Congress and senior aides to President Donald Trump have called on Amazon to improve its anti-counterfeiting efforts, and the e-commerce giant has been introducing new programs to settle or head off intellectual-property disputes.

But “many of its initial attempts to deal with bad actors on its site, while clearly done in good faith, assumed that the initial set of bad actors (counterfeiters) was the problem to be dealt with, and its response then created a new set of opportunities for new kinds of bad behavior,” Tushnet said.

An Amazon spokesperson told Bloomberg Law Feb. 12 that the company has policies in place to ensure rights owners file proper infringement claims, including a requirement to attest under penalty of perjury that a report is accurate.

“We take swift action against those that violate or abuse our policies, and have a number of proactive mechanisms in place to detect and prevent abuse before it impacts a selling partner,” the spokesperson said. “We take this responsibility seriously, closely monitor our decision accuracy and maintain a very high bar to ensure honest entrepreneurs can build thriving businesses.”

Amazon’s spokesperson said the company wouldn’t comment on the pending litigation. Amazon itself isn’t a defendant in any of the cases.

“Amazon respects the intellectual property rights of others and requires that third-party sellers do the same when listing items for sale on Amazon,” the spokesperson told Bloomberg Law. “While more than 99% of page views by our customers landed on pages without a notice of potential infringement, we continue to experiment and develop tools that will help us better protect rights owners and our customers.”

Amazon takes complaints from IP owners about alleged copyright, trademark, design patent and utility patent infringement through a form available on its web site. Neither the form nor its intellectual property policies for sellers and rights owners explain how Amazon evaluates claims or who does that work.

Utility patent issues are complex, and more difficult to resolve quickly than trademark or copyright claims. Amazon’s policy is not to remove products that allegedly infringe a utility patent without a determination by a court or the International Trade Commission, but the court complaints say the e-commerce giant took down products almost immediately after receiving a complaint—including some utility-patent complaints—with little if any investigation.

Mark J. Rosenberg, a partner in the intellectual property group of Tarter Krinsky & Drogin LLP in New York, says he hasn’t seen this “quick trigger” in utility patent cases in his work on Amazon IP issues, but he has heard of it happening and seen it in design patent cases. 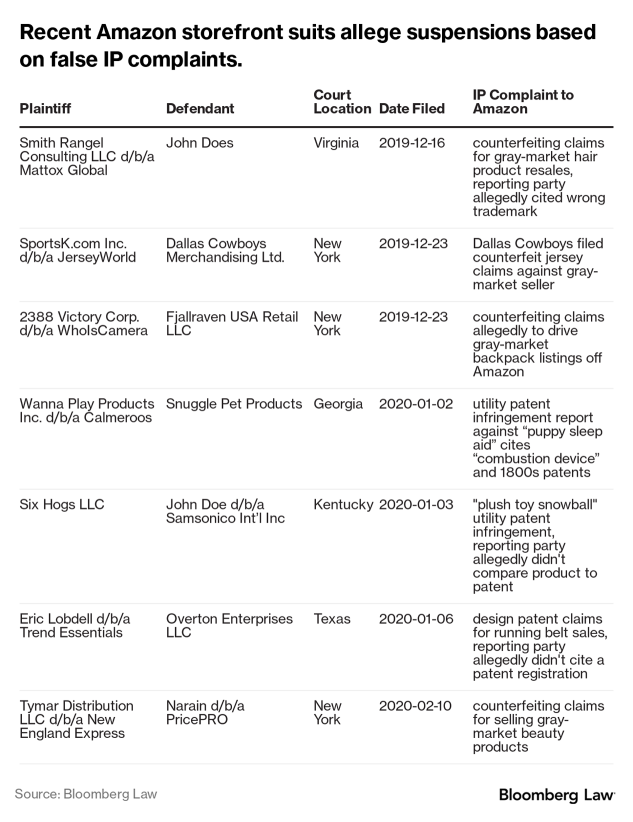 A complaint filed by the owners of a storefront called Trend Essentials said its suspension after a design patent infringement report effectively functioned as a preliminary injunction. Trend Essentials called this a “drastic and extraordinary” remedy, one that courts only grant in infringement cases after finding the moving party will likely win its case on the merits.

Six Hogs LLC’s complaint says that because infringement allegations are “easy to make and provide strong leverage on Amazon’s platform,” false reports are “a common means by unscrupulous sellers to suppress competition.”

“Now, those that are referred to by some as ‘trolls’ don’t have to actually sue to exact license fee payoffs,” said , a senior intellectual property attorney at Dykema Gossett PLLC in Washington. “They can just file a complaint with Amazon, and get the equivalent of injunctive relief without the very exacting showing for the same the courts require.”

Two of the storefronts noted that their listings were banned from Amazon between Black Friday and Christmas—reflecting a tactic used often by entities that file false infringement claims, Rosenberg said.

“If you knock off sales during a key selling season, it can bankrupt a business,” he said.

Sometimes Amazon suspends entire storefronts in disputes over products. A complaint filed by the storefront Calmeroos called this “akin to Samsung having an intellectual property complaint against one television model, then Walmart removes all of Samsung’s televisions, stereos, speakers, computers,” and other products.

Amazon will reverse a suspension if the reporting party retracts its claims, but some storefronts say the party that reported them ignored their attempts to discuss the issue, or even concealed their identity.

WhoIs said it was reinstated only after paying consultants more than $10,000 to “get Amazon to hear plaintiff’s explanation of Fjallraven’s outrageous conduct,” and that Fjallraven’s claims remain a “blight” on its account.

Fjallraven didn’t respond to a request for comment after the complaint was filed and hasn’t filed an answer to the allegations in court.

Amazon’s anti-counterfeiting policy generally tracks its IP policy, although complaints say it’s been misused to stop legal sales. Rosenberg says he represented a legitimate gray-market bookseller that was banned under the policy and was never able to return. And some of the complaints allege companies use false counterfeiting reports to suspend sales of legal gray-market products below a manufacturer’s “minimum advertised price"—meaning the lowest price it will allow a retailer to cite in advertising. Amazon’s IP policy for rights owners specifically says it’s not intended to cover MAP agreements.

“What I suspect is that at this point, Amazon is so inundated that they are just looking to ‘check the boxes’ for what a brand owner has to submit to make a counterfeiting claim, and leaving it to the seller to hash it out with the brand owner,” Gentner said.

Amazon last year introduced an arbitration option for resolving utility-patent complaints specifically. The Utility Patent Neutral Evaluation program was begun as a pilot in 2019, and Rosenberg says Amazon lawyers have been “cagey” about whether it plans to make the process permanent. Amazon says the program is still being tested.

Parties that agree to use it each pay $4,000 for a neutral, Amazon-appointed patent attorney to determine whether a product likely infringes a valid patent. The winning party gets its money back, and the losing party’s money goes to the evaluator. If the evaluator finds infringement—or if the alleged infringer doesn’t participate—the product listing is removed, and will only be reinstated after a court order.

“I think it’s fantastic,” said Rosenberg, who has represented parties in the program. “Federal court litigation to get a finding of noninfringement or infringement can take years and $1 million or more. This cost a tiny fraction of that and took 4 months.” Rosenberg also noted that the attorney appointed as an evaluator has no relationship to Amazon and that the proceeding isn’t binding—a ruling in the program can’t stop you from also going to court.

Still, the patent program lacks many features that courts use to flesh out infringement claims, such as precedent, expert witnesses or a discovery process. It limits the disputes it will consider to one claim from one unexpired patent.

A separate program, launched in October, pairs businesses with selected IP law firms to register their trademarks with the federal government. The Intellectual Property Accelerator program gives participants “accelerated access to brand protection in Amazon’s stores” months or years before a registration is granted, including the ability to report trademark infringement, according to a company blog post.

Liam Reilly, an intellectual property attorney at Husch Blackwell LLP in Kansas City, Mo., said Amazon and other e-commerce platforms deserve credit for trying to address IP disputes between their users. “The problem, however, may lie in the fact that intellectual property issues can get very complex and these platforms are not in the business adjudicating rights between third parties,” he said.

No matter how strong Amazon makes its procedures, “it is likely to be impossible to avoid harming innocents altogether in such a big system,” Tushnet said. “But I think the current situation does predictably award abusers of takedown procedures.”

(Updated beginning in eighth paragraph with additional comment from Amazon.)