Instead of suing anonymous defendants in federal court for pirating its films, an adult film company is filing complaints in a Florida state court to identify the people behind their internet addresses.
Patrick T. Fallon/Bloomberg

Strike 3 Holdings LLC has headed to South Beach in the hope of unmasking the identities of hundreds of people accused of pirating its copyright-protected adult movies.

After flooding federal courts with copyright suits against anonymous people who illegally download its movies, the adult film company is trying a new approach — starting cases in a state court in Miami in order to learn the identities of potential defendants there.

Strike 3 made the strategic shift after some federal courts began pushing back on the company’s attempts to unmask targets of lawsuits. It’s also a cost saver. Rather than file each case individually in federal court, Strike 3 can group large numbers of people together in a single case in Miami-Dade County Court.

“They finally took it from playing checkers with chess pieces to actually playing a game of chess,” said Leonard French, an attorney in Allentown, Pa. who has represented hundreds of people sued by Strike 3 and other adult film companies.

Lawyers for Strike 3 argue piracy is a pervasive problem for the company, and the Miami cases are a more effective way to investigate. Others argue the approach is legally questionable. Lawyers for accused infringers call the cases cleverly disguised copyright actions that belong in federal court.

Tyler Mamone, an attorney at Mamone Villalon in Miami who represents Strike 3 in Florida state court cases, said the purpose of the litigation is to stop infringement and recoup some of the company’s losses caused by “rampant piracy.”

“The bill of discovery lawsuits further these goals while at the same time minimizing the need to file federal copyright infringement suits,” Mamone wrote in an email. 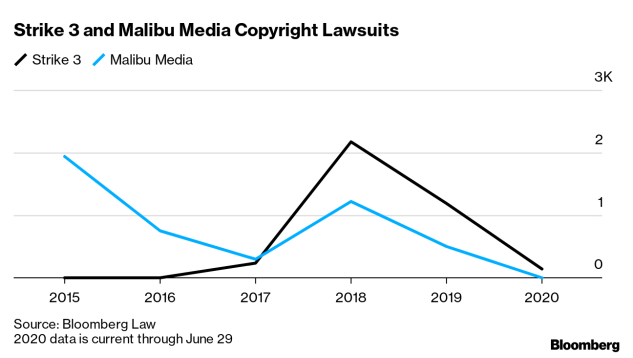 Copyright cases in federal court are down more than 40% this year compared to the same period last year, Bloomberg Law data show. The decline can be pegged, in large part, to fewer filings from Strike 3 and the virtual disappearance of another once-vigorous adult film company litigant, Malibu Media LLC. Strike 3 has filed 134 copyright lawsuits in federal court so far in 2020, compared to 1,067 during the same period in 2019.

Strike 3 and Malibu’s copyright lawsuits long followed a similar script. The companies identified IP addresses that used file-sharing systems like BitTorrent to watch movies, then asked a judge to order internet service providers to reveal the subscriber. The cases often settled or were dismissed.

In late 2018, U.S. District Judge Royce Lamberth in Washington D.C. refused Strike 3’s request and said the company flooded federal courts with lawsuits “smacking of extortion.” District court judges in places like New Jersey have also said more than an IP address is needed in those types of cases.

Strike 3 has appealed Lamberth’s ruling. During appellate arguments in March, an attorney for Strike 3, Lincoln Bandlow of Law Offices of Lincoln Bandlow PC, said the lawsuits are the only way it can identify serial infringers and stop what is a massive problem for the company.

Bandlow defended against concerns about privacy, saying Strike 3 agrees to protective orders that allow defendants to remain anonymous. He also argued privacy is less of an issue when there is theft.

“We don’t get to go steal things and keep it private,” Bandlow said.

Strike 3 opened the new chapter in its playbook last fall, when it began filing cases in Miami-Dade County. So far the company has filed more than 40 such complaints, which can be several hundred pages long and include a series of IP addresses that have been used to download films. Miami-Dade judges have signed off on subpoenas.

Florida is where Strike 3 says its “infringement detection servers” are located. The state also has a procedure that allows complaints for a “pure bill of discovery.” In other words, the complaints don’t ask for money—only a court order that such internet providers as Verizon Wireless and . reveal the subscriber.

The goal of the cases is to “identify the appropriate defendant for a subsequent copyright infringement lawsuit,” Strike 3 says in state court filings. David Lin, an internet and IP litigation attorney at Lewis & Lin LLC in New York City, said Strike 3 is able to accomplish in Miami something that it can’t in federal court.

“They are able to join together hundreds of potential John Doe defendants, and essentially with paying one filing fee they can get a court to allow them to issue subpoenas as to hundreds of defendants,” Lin, whose firm has defended against John Doe cases, said.

Some IP addresses might be a dead end, belonging to a coffee shop, library, or other place where the downloader can’t be identified. Other times, Strike 3 is able to identify a subscriber that it believes is responsible for illegally downloading films.

In one case filed in California federal court this year, Strike 3 said it learned, through the Florida proceeding, the name of a Walnut, Ca., resident who downloaded over 140 films. Similar lawsuits have been recently filed in federal courts in places like New Jersey and Illinois.

Strike 3 has also filed federal lawsuits against defendants who objected to being sued in a Florida state court.

“Defendant objected asserting that the action is more properly litigated in the federal court of his or her domicile,” the company wrote in a complaint filed in the U.S. District for the Central District of California this month. “Because Plaintiff is amenable to litigating the matter in either forum, this suit was initiated.”

Some potential defendants have fought back against Strike 3, and filed motions to quash subpoenas. They maintain the cases belong in federal court because Strike 3’s argument for granting a bill of discovery is based on alleged violations of federal copyright laws.

Some have argued the Miami-Dade County court doesn’t have jurisdiction over people who live in other states.

Danny Simon of Lalchandani Simon PL, who has represented some 75 people in the state cases, said each time he has filed a motion to quash, Strike 3 has dropped that individual from the complaint. Judges then have not ruled on the motions.

Simon said the company has “nestled themselves into this little procedural loophole” that, absent a legislative change, may not close.

“I think Strike 3 has made it a permanent part of their business model,” Simon said.