Five global automakers — including General Motors and Tesla — have requested at least 389 exemptions from U.S. tariffs imposed on imports from China by the Trump administration, according to a Bloomberg Law analysis.

GM is asking the U.S. Trade Representative to waive tariffs on 40,000 Buick Envision sport utility vehicles imported from China each year that help fill a gap in its U.S. luxury car lineup, the automaker said in a letter to the trade representative.

The impact is rippling down to auto suppliers as well: Tianhai Electric North America requested some 253 waivers for products sold to FCA and GM.

In addition to costs, there could be safety ramifications, Tesla said, filing three requests for the computers and electrical control units that the company calls “the brains” of the vehicles.

The automakers say in their application documents for waivers that the tariffs would force them to raise prices and possibly harm the economy and employment in the U.S.

None of their requests had been granted as of January 4, the latest release of the request status. USTR has granted 984 and denied 1,258 of the 12,857 posted requests for exemption from section 301 tariffs. 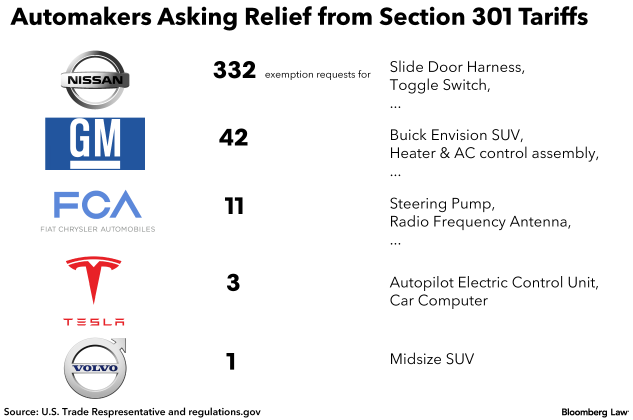 The four-stage reviews include a comment period followed by USTR’s determination whether to grant approvals followed by consultations between the USTR and Customs and Border Protection. The final step is approval.

Section 232 tariffs on steel and aluminum imports imposed earlier this year also allow for similar petitions, but the process and delays have caused complaints from both companies and Congress.

The Buick Envision SUV—for which GM requested a waiver for 40,000 units per year—fills the gap in GM’s luxury car lineup in the U.S. market, and would generate free cash flow for its investment in technologies, GM said in a letter to the trade representative. GM also requested 41 waivers for parts and machinery that would be expensive and time consuming to change suppliers.

President Trump has ordered tariffs placed on certain Chinese imports. They include a wide range of products.

The total value of products from the initial tariff list—for which GM is requesting an exemption—is between $30 million and $40 million. GM had been paying the tariffs, a GM spokeswoman told Bloomberg Law in an email.

Volvo said the Chinese and the metal tariffs would cause severe economic harm to American consumers and the U.S. economy, citing estimates on car price increases and job losses in its letter to the USTR. Although Volvo didn’t discuss the impact of the tariffs in the letter, tariffs were mentioned as a contributing factor to Volvo’s lower sales forecast in China in its 2018 third-quarter earnings call.

Fiat Chrysler Automobiles asked for 11 waivers on steering pumps and stators, which are the stationary parts of engine rotary systems. Failure to grant the exclusion requests would increase costs, leading the company to either reduce its margins or pass the cost onto consumers, or some combination of both, Fiat Chrysler Automobiles said in its request.

Nissan also has concerns about costs: a higher cost structure caused by the tariffs will result in a competitive disadvantage to Nissan and other U.S. automakers in the global market. Nissan has 332 requests for waivers, including for car stereo wiring sets, slide door harnesses, and air conditioner switches.

The uncertainty created by the Chinese tariffs and the steel and aluminum tariffs combined are also holding automakers from making decisions on investment, said Joel Levington, a Bloomberg Intelligence credit analyst.

Car manufacturers planning their multi-billion dollar budgets are factoring in what manufacture sites will generate the optimal return, Levington said. “If there are things like tariffs that are able to change the economics, the car makers cannot spend it at all until they have clarity,” he said.

Retaliation is also on the minds of automakers, who must also contend with the 25 percent tariff that China imposed on U.S. cars. The Chinese tariffs were to be suspended for three months starting January, after a talk between presidents of the two countries at the G20 Summit in December.

The tariffs have not yet shown an impact on consumer demand in the U.S. car market, with the average vehicle price sold in the U.S. reaching a record high in November, said Kevin Tynan, a Bloomberg Intelligence auto analyst.

It’s hard to determine how much of the price surge was caused by the tariffs because other factors, such as the increasing sales of more expensive trucks, could be at play, he said.

Tynan thinks the tariffs’ biggest impact thus far is disruption to the supply base, and the suppliers are feeling more of the pain.

“The manufacturers have the opportunity to pass that cost along to consumers, or push back on the suppliers. The suppliers have nowhere to go,” Tynan said.

An unintended outcome of the tariffs and the exemption request system, potentially, is the disagreement between the two large manufacturers that both requested waivers for mid-sized SUVs.

Volvo submitted a comment on GM’s request for the Buick Envision SUV, saying that GM’s product description needs to be broader to incorporate other mid-sized SUVs, such as the Volvo XC60.

It is not clear whether GM and Volvo changed pricing of the two models in the U.S. because of the tariffs.

GM said in an email that it is still evaluating the impact of the tariffs. Volvo responded in an email Jan. 7, saying that it has implemented a plan to shift production and limit some vehicle imports.

(Updates with comments from Volvo.)

To contact the reporter on this story: in Washington at yhan@bloomberglaw.com