The U.S.-China trade war has companies eyeing potential opportunities in Southeast Asia, and the region’s manufacturing, textile, and seafood industries could potentially benefit.

That’s why Walter Blocker bid earlier this year on High Point, N.C.-based Stanley Furniture. He’s optimistic that Vietnam-based production will give the company an edge over Chinese furniture made more expensive to U.S. customers by tariffs.

“This is better than TPP for Vietnam,” Blocker told Bloomberg Law, referring to the rebooted Trans-Pacific Partnership trade deal, now known as the Comprehensive and Progressive Agreement for TPP. “This furniture business is going to be amazing.”

The threat of a trade war has spurred growing anxiety in a region on China’s door step that fears the possibility of a global economic slowdown or even disruptions along the shipping routes linking it to the U.S. At the same time, U.S.-China tensions could increase Southeast Asian exports to both countries and makes the region all the more attractive a spot to relocate factories.

The furniture industry is a prime example of potential opportunities for Southeast Asian manufacturers.

“Our company is very well-suited to take advantage of the circumstances,” Blocker said of Stanley, which is a Nasdaq-listed furniture company.

There are already signs that U.S. tariffs on textiles and apparels is driving gains in Southeast Asian exports.

U.S. imports of those products from Vietnam, the second biggest supplier of clothes shoes and bags after China, jumped 11.3 percent in August 2018 versus August 2017, with a 6.4 increase from Indonesia and a 3.8 percent increase from Cambodia, the Commerce Department said Oct. 5. 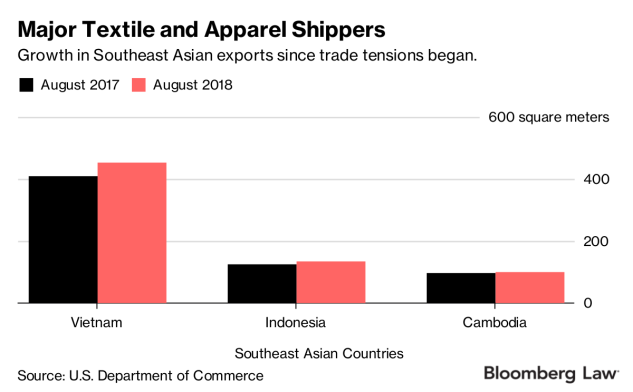 By contrast, textiles and apparel shipped from China stayed largely flat, up just 1 percent. Those goods were hit hard in the latest U.S. tariffs.

“Vietnam is still far behind China,” said Tuyet Mai, deputy secretary general of the Vietnam Textile and Garment Association. “But if there are tariffs [on China], of course Vietnam will export more, U.S. companies will buy more from Vietnam.”

The tariff war could also accelerate the push by Chinese manufacturers looking for lower cost operations in Southeast Asia.

Manufacturers in China have been eyeing ASEAN for years, some as part of the “China Plus One” strategy to find lower costs, others to take advantage of benefits in the revised TPP trade pact signed by Hanoi, Kuala Lumpur, Singapore, and eight others but not Beijing.

Ken Duong, managing partner at the TDL International Law Firm, said he has clients transferring their plywood production from China to Vietnam this year to cope with the tariffs.

Malaysian government officials say investors are shifting there from China and the U.S., which could bolster its main exports, such as metals, machinery, and optical equipment to the U.S., chemical and petroleum products to China, and electrical and electronic goods to both countries.

Malaysia is already integrated into the China-to-U.S. electronics supply chain, making it a logical destination as the sector moves some production from China. Electronics are Malaysia’s biggest export (37 percent of total exports) with firms like Samsung, Panasonic, and Motorola sourcing there.

Southeast Asian businesses are also eyeing potential exports to China. The Southeast Asian seafood industry is angling to increase exports as the price of U.S. fish.

Sea Value, Thailand’s biggest seafood exporter, as well as Thai Union Frozen Products and Charoen Pokphand Foods are among producers seeing exports rise, industry analysts say. One company told Bloomberg Law it has seen a 15-percent jump in orders from both China and the U.S.

Thai officials “discovered that the trade war is likely to do more good than harm to the export sector as it has given Thailand an opportunity to promote exports of certain goods to America and China,” the government’s National News Bureau of Thailand reported in July.

Not everyone is convinced is that Southeast Asia ultimately wins in a U.S.-China trade war.

In the region there is “fear that economies will slow, tariffs will grow, and jobs and markets will be lost,” said Curtis Chin, Asia Fellow at the Milken Institute, an economic think tank, and former U.S. Ambassador to the Asian Development Bank., who is based in Singapore. “A growing anxiety haunts Southeast Asia’s businesses.”

To contact the reporter on this story: Lien Hoang in Ho Chi Minh City at correspondents@bloomberglaw.com

To contact the editor responsible for this story: Jerome Ashton at jashton@bloomberglaw.com