The closely watched battle between insurers and their policyholders over pandemic-linked financial losses has entered its next phase, as federal appeals courts prepare to weigh in on litigation with billions of dollars potentially at stake.

Initial rulings in more than 50 of these lawsuits have made their way to U.S. circuit courts, Bloomberg Law research shows. Nearly all appeals came from small businesses looking for do-overs after being told they can’t tap their policies for financial hits stemming from government-issued shutdown orders and reduced operations.

The first appeals court opinions are likely to set the tone for future and pending challenges, and they also could contribute to an already complex landscape for Covid-19 business interruption claims. Insurers and policyholders are polishing their arguments and strategies, which involve numerous states’ laws and are expected to encompass the impact of non-essential business closures, potential ambiguity in policy exclusions, and which courts should weigh in on this issue.

“It’s unlikely that any single appellate ruling will set industry-wide precedent, given that the cases involve different policies with different language, as well as different states’ laws,” said Elliott Stein, a senior litigation analyst at Bloomberg Intelligence. “What we’re looking at is a rather fragmented legal regime.”

Roughly 1,500 Covid-19 loss lawsuits have flooded courts across the country since March 2020, according to data compiled by the University of Pennsylvania Law School. Small businesses went to court first and larger companies with greater resources, including and , later joined the fray to secure coverage for tens of millions of dollars in losses. Trial court decisions recently surpassed 200, with the majority backing insurers and underwriters such as , , and —among the most sued in the U.S.

Policyholders recently scored a string of favorable opinions denying insurers’ motions to dismiss and keeping their cases alive. However, it’s unclear whether that streak will open the door to more rulings finding that they’re owed insurance coverage, or bolster policyholders’ collective chances on appeal.

The majority of these appeals are still at early stages.

Opening briefs have been filed in almost 15 cases and roughly a dozen more are due by the end of March. A handful of cases in the Eighth and Ninth circuits have outpaced the rest of the appeals, although no oral arguments have been held.

The U.S. courts of appeals for the Third and Ninth circuits have been the most popular venues for appeals to date, with more than a dozen pending in each. 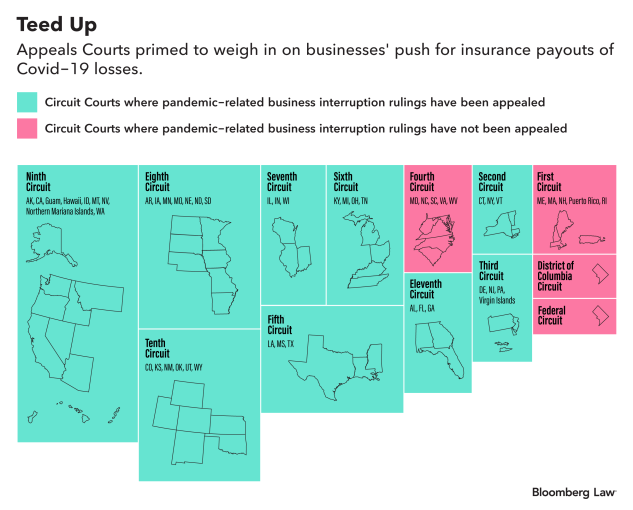 Underlying the bulk of these appeals is the question of whether statewide emergency orders and closures of non-essential businesses result in physical loss of, or damage to, property that triggers payouts.

“There seem to be two, firmly entrenched camps on this issue,” said Joseph Miele Jr., a partner at Kaufman Dolowich Voluck.

Judges in some jurisdictions, such as California, have held that loss of property use could be enough to meet the physical loss or damage threshold.

In others, judges found that a tangible property alteration was required, and that loss of use wasn’t enough. This doomed multiple cases in the past week.

A Massachusetts federal judge tossed out Legal Sea Foods LLC’s lawsuit against Strathmore Insurance Co. on March 5, citing a lack of actual property damage. And a federal judge in Arizona did the same on Monday to a case brought by a group of three bars and eateries.

Appeals courts are being asked to determine whether language meant to exclude coverage for losses resulting from bacteria or a virus in certain policies is ambiguous and can’t be used to deny claims.

In separate cases before the Ninth Circuit, a dental products maker and a children’s clothing boutique both alleged that trial courts didn’t correctly apply California law when finding the companies lacked coverage.

California law makes a policyholder’s reasonable interpretation of a policy the controlling one, store owner Mudpie Inc. said in its opening brief. The trial court got it wrong by interpreting its policy as needing loss or damage that’s “permanent” or resulting from an “intervening physical force,” according to the brief.

Selane Products Inc., which had its proposed class action against Continental Casualty Co. twice dismissed, argued on appeal that a trial court ruled out past decisions in California finding substances such as viruses can cause property loss or damage.

leaned heavily on policy exclusions and a slew of early pro-insurer rulings in its bid to overturn a loss against a restaurant owner handed by an Ohio federal judge.

The judge “reached the diametrically opposite conclusion” to more than 130 federal decisions in insurers’ favor, Zurich said in its petition for appeal before the Sixth Circuit. “In doing so, the district court brushed aside clear policy language to the contrary, with barely a glance at this mountain of opposing authority.”

Multiple circuits are considering whether to group together appeals—a move touted by policyholders as a way to speed up the process and bolster their arguments.

The Third Circuit already combined a few similar cases, and additional consolidation could be in the cards.

Policyholders in eight lawsuits pending in that circuit are pushing to consolidate more than a dozen similar appeals over insurers’ objections. Cases on appeal in the Eleventh Circuit have also been floated for possible grouping. Insurers, though, backed consolidation in three Third Circuit appeals challenging the remand of cases to state court.

Some parties voluntarily agreed to have their cases heard by the same federal judge as a way to share resources. Other cases were sent to the Judicial Panel on Multidistrict Litigation (JPML).

The panel formed two centralized proceedings, one for lawsuits against Society Insurance Co. and another for cases involving Erie Insurance Co. It rejected efforts to create a handful of other insurer-specific proceedings, as well as multidistrict litigation for all Covid-19 business interruption cases.

State venues have, on the whole, been slightly kinder to policyholders than federal courts based on the number of favorable rulings. Businesses have often sued their insurers in state court and had their cases removed to federal courts.

Still, state courts are handling a significant number of these lawsuits, essentially creating two tracks for the litigation.

Supreme courts in California, Pennsylvania, and Ohio have been asked to decide how specific policy language should be interpreted in pandemic-related business interruption fights, although none have weighed in.

“I do believe that the states are going to get more involved here,” said Robin Cohen, chair at Cohen Ziffer Frenchman & McKenna LLP. “The more streamlined the process and the more quickly you can get to the state supreme court, that is really a positive. More policyholders should push for that.”

Insurance industry groups and counsel for insurers downplayed the potential for these cases to wind up in state high courts, as well as the scope of any impact of those that do.

“I don’t think there is any magic panacea here,” said Tom Karol, general counsel for the National Association of Mutual Insurance Companies. “You’ve got all kinds of different policy language” in cases across multiple states with different laws, he added, suggesting that a single ruling won’t clear up questions in the bulk of other lawsuits. “It really comes down to a question of contracts and contract law.”

Some policyholder attorneys expect the appeals to, at the very least, create a mixed bag of rulings that move the ball toward some form of resolution.

Although appellate decisions could send certain cases back to district courts with additional questions to sort through, rulings at that level are still a step toward closure for businesses left in limbo since the pandemic hit, Cohen said. “They need to know one way or another whether there is coverage. But there are some really good claims out there with sympathetic courts.”

The insurance industry, though, isn’t planning for these early appeals to go much differently from the early rulings at the trial court level.

“In the vast majority of these appellate cases, we think it’s very, very difficult for courts to find a mistake of law,” Karol said.

One issue both sides to this litigation agree on is the importance of the first few appeals court decisions to break their way.

“These cases are still very fact-specific, but once you have a critical mass of rulings for either side, it’s easy for judges to point to them,” said Stein of Bloomberg Intelligence.

Policy, factual, and jurisdictional differences could potentially limit the applicability of any one insurance law ruling, but that hasn’t stopped parties involved from leaning on preceding decisions to support their own stances.

“Ultimately, this is something state high courts may have to decide,” said Gabriel Gillett, a partner at Jenner & Block LLP and appellate counsel for the Restaurant Law Center."But if the first federal appellate decisions favor policyholders, that could have real persuasive value across the country.”

So far, insurers haven’t been settling these lawsuits.

Settlements of coverage claims were common in previous insurance litigation tied to a specific, regional catastrophe, such as a hurricane. But the widespread effect of the virus, coupled with the carriers’ stance that pandemics aren’t insurable, has sidelined this tool for swiftly endings lawsuits and reducing legal costs.

And with so many cases at different stages, there’s an open questions about what, if anything, might push carriers involved in Covid-19 business insurance lawsuits to the negotiating table.

“Once the wave of appellate decisions starts to move in one direction, the other side is going to have to be more reasonable in their expectations,” Miele said.

(Updated to include details of recent rulings. A previous update corrected the spelling of Elliott Stein's name. )