The threat of abortion-related legal liability in Texas has raised hard-to-answer questions about companies’ plans to help employees travel for out-of-state procedures—including how much sensitive employee information a company could be forced to disclose in court.

Following the US Supreme Court’s decision last month to strike down the constitutional right to abortion, 26 states have banned or are expected to ban most abortions, according to the Guttmacher Institute, a research group that supports abortion rights. In response, a long list of major US employers and large law firms announced they will provide travel reimbursement or other benefits to employees who can’t access abortion services in their home state.

Texas is front and center in the abortion rights battle, drawing attention last year for a new whistleblower-type law (SB 8) that lets an individual sue anyone who “aids or abets” an abortion and receive a $10,000 reward. Now, a group of conservative Texas lawmakers is warning employers who offer travel assistance or health-care benefits for abortion procedures or medications that they could be sued and also face criminal charges.

Members of the Texas Freedom Caucus in a July 7 letter accused law firm Sidley Austin LLP of assisting with illegal abortions since Sept. 1, 2021, when SB 8 took effect, and warned the firm to preserve any related documents or records.

At least parts of the Freedom Caucus letter are likely hyperbole, but the legal risks outlined there can’t be ignored, said Timothy Verrall, an employment lawyer with Ogletree, Deakins, Nash, Smoak & Stewart P.C. in Houston.

Some large employers have “rightly regarded that letter as kind of performative on behalf of that group,” he said. “It’s not to say they shouldn’t be taken seriously. I have concerns that they may have some points or at least some arguments that aren’t crazy under the law.”

Apart from the employee privacy questions, it’s also possible employers that make available abortion-related aid could be sued or prosecuted in Texas even if no employee uses those benefits, said Rebecca Parma, senior legislative associate for Texas Right to Life.

“The fact that the intent is clear there might mean you don’t need an example,” she said, adding the group isn’t aware of any cases filed against Texas employers so far.

Employee health information that’s held by a company health plan is largely protected by privacy laws such as the federal Health Insurance Portability and Accountability Act. But HIPAA has exceptions that allow information to be disclosed for law enforcement purposes—with the employee’s permission but also without permission in certain instances, such as when there’s a court order, warrant, or subpoena requiring the disclosure.

How courts apply those exceptions in abortion cases against Texas employers will make a big difference for employee privacy, as well as employers’ ability to offer abortion-related assistance without legal repercussions.

“If push comes to shove, certainly in the criminal context, they’re going to get access to at least some information. That’s probably the case in a civil proceeding as well,” Verrall said. It’s likely that sensitive records would be disclosed to the court under seal, protected from becoming public record, he added.

Many companies offering health benefits that could assist abortion seekers are framing it as reproductive health care, so that the use of such benefits isn’t tied to a particular procedure, according to Scott Weinstein, a partner at law firm McDermott Will & Emery. Then it would be more difficult for a company to provide law enforcement with records on which employees used the reproductive health benefit for an abortion.

“The goal is not to know,” Weinstein said.

Companies also could design their health-related travel reimbursement policies in a way that doesn’t require collecting sensitive data on the destination, like in receipts, he said.

For large companies, which often have self-funded health plans that are governed by the Employee Retirement Income Security Act, that federal law preempts state regulation of health benefits to some degree. 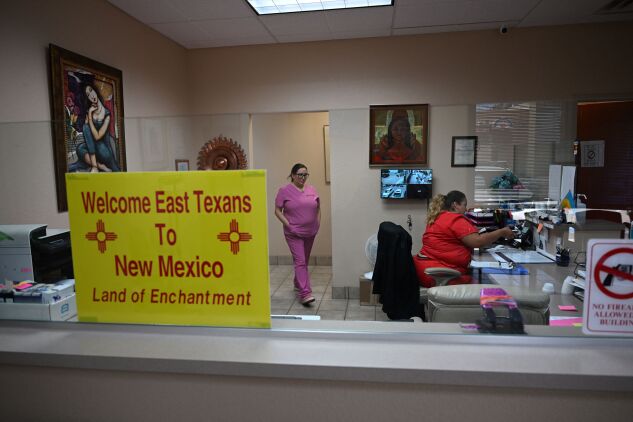 A sign welcoming patients from East Texas is displayed in the waiting area of the Women’s Reproductive Clinic, which provides legal medication abortion services, in Santa Teresa, N.M., on June 15.
Photo by ROBYN BECK/AFP via Getty Images

It remains to be seen how far law enforcement may go to find suspected abortions in a state like Texas that has threatened to go after employers with reproductive health benefits. One question is whether law enforcement would ask to search health-related records only for specific individuals accused of terminating their pregnancy, or if authorities would seek out anyone who took advantage of a reproductive benefit to try and find suspected abortions.

“Just because a benefit is offered, that doesn’t mean anybody used it,” said Sheila Sokolowski, a partner at Hintze Law PLLC. If a company pushes back on a data demand in court, judges could step in and prevent law enforcement from going on “fishing expeditions,” Sokolowski said.

Sara Spector, a criminal defense attorney in Midland, Texas, and a former prosecutor, agreed that the extent of criminal prosecutions against employers and demands for employee information will depend largely on how aggressive the state’s more conservative district attorneys choose to be.

“If there’s a grand jury subpoena, they’re not going to have any recourse,” she said. “It’s just open season in Texas.”

If conservative state legislators have their way, the Texas laws punishing abortion-related assistance could get even tougher next year.

The 2021 civil enforcement law, SB 8, lets anyone in the US sue any person or entity for aiding an abortion, but its application to out-of-state abortions could be limited.

Under the Texas law, abortion providers are defined as those practicing under license in the state, so it wouldn’t apply to out-of-state providers, she added.

As for criminal prosecution of employers, the Texas Freedom Caucus has pointed to existing Texas laws that were on the books before the Supreme Court’s Roe v. Wade decision in 1973 but haven’t been enforced for decades.

While the conservative lawmakers argue those laws are still available for prosecuting accomplices in illegal abortions, they’ve also said they plan to strengthen the state’s ability to prosecute through legislative proposals such as letting district attorneys prosecute cases anywhere in the state. That could prevent more progressive-leaning local DAs from stopping abortion-ban enforcement in their jurisdictions.

The proposals are likely to create tension between social-conservative Republicans and the more business-friendly wing of the party during the 2023 legislative session, which begins in January.

“The right wing of the party doesn’t set the agenda,” said Joshua Blank, director of research at the Texas Politics Project at the University of Texas in Austin. “Having said that, you can’t look at what was passed in the most recent legislative session in Texas and look ahead to the next session and think that anything is necessarily off the table.”