Some employment-based visas are set to go to waste at the end of September, U.S. officials say, painting a bleak picture of the government’s ability to smooth legal immigration and address perennial backlogs and resource constraints.

“We do expect to have some visas go unused. It’s not a surprise,” U.S. Citizenship and Immigration Services acting deputy director Tracy Renaud said at a court hearing Wednesday.

The U.S. District Court for the District of Maryland is weighing a dispute over the agency’s failure to process applications for employment-based green cards that will disappear without action by the end of September. 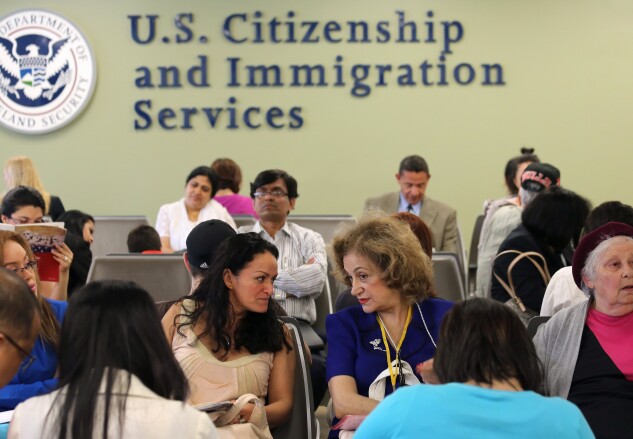 Immigrants wait their turn for green card and citizenship interviews at May 30, 2013 at the U.S. Citizenship and Immigration Services office in Queens, a New York borough heavily populated with immigrants.
John Moore/Getty Images

The projected 180,000 green-card applications processed this fiscal year still exceeds several recent years’ levels, Renaud said, but it falls short of those available. She didn’t specify how many visas would go to waste, but legal filings indicate the number will be around 80,000.

The Biden administration faces challenges in streamlining legal immigration with USCIS consistently stretched beyond its bandwidth. Trump-era policies and the Covid-19 pandemic strained the already cash-strapped agency, which is largely funded through filing fees.

USCIS workers have been called on to handle other urgent matters, including asylum seekers at the southern border and resettlement efforts for Afghan evacuees, Renaud said.

The agency is doing “everything in our power to process as many of those applications as possible, " USCIS chief counsel Ashley Tabaddor said, adding that Congress needs to act for any comprehensive fixes.

Several Democrats are pushing congressional leaders to address the employment-based green-card backlog this fall through the broad budget reconciliation measure that Democrats can pass without GOP votes.

“Any package that includes immigration reforms must address this backlog not only as a matter of fairness, but as a central component of our long-term strategy for economic prosperity and global competitiveness,” Rep. (D-Ill.) said in a letter Tuesday.

The federal court in Maryland, where USCIS has its headquarters, is wrangling around 150 cases that seek to force federal officials to process various types of visa applications faster. Judge Peter Messitte ordered USCIS leaders to appear Wednesday so he could get a clearer picture of the backlog.

The employment-based green cards set to go to waste represent just one category of visas at issue in the snowballing litigation. More than 100 Indian and Chinese applicants filed suit in August, seeking to force USCIS to issue visas or roll them over for the next fiscal year after pandemic disruptions to 2020 family-based visa processing created an influx of employment-based visa availability this year.

Applicants who often wait years or decades to secure employment-based green cards hoped the influx would shorten their wait time but were dismayed to see that USCIS wasn’t approving applications fast enough to dole out the full amount of available visas.

“It’s not that we’re not mindful of it; it’s just that this is a very, very unique circumstance,” Tabaddor said Wednesday.

Several plaintiffs’ attorneys attempted to interject at various points of the hearing, but Messitte rebuffed them, saying he only wanted to get a status update from the government.