People sit on the beach in Miami Beach, Fla., on June 10. Florida is among the states experiencing a rise in Covid-19 cases.
Photographer: Jayme Gershen/Bloomberg

Covid-19 is increasingly a disease of the young, with the message to stay home for the sake of older loved ones wearing off as the pandemic wears on.

The dropping age of the infected is becoming one of the most pressing problems for local officials, who continued Wednesday to set curfews and close places where the young gather. U.S. health experts say that they are more likely to be active and asymptomatic, providing a vast redoubt for the coronavirus that has killed almost 130,000 Americans.

In Arizona, half of all positive cases are people from the ages of 20 to 44, according to state data. The median age in Florida is 37, down from 65 in March. In Texas’s Hays County, people in their 20s make up 50% of the victims. 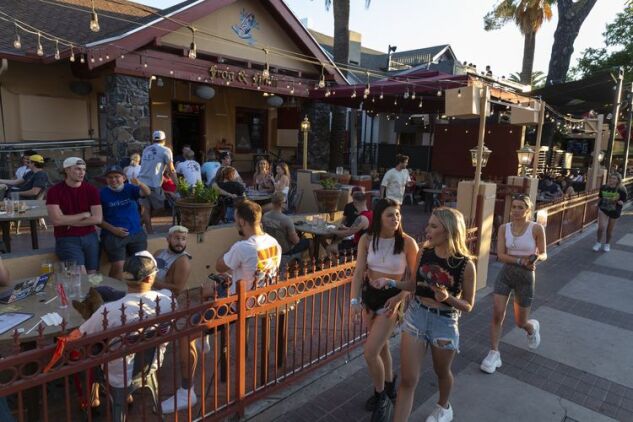 Pedestrians walk past customers sitting outside at a bar in Tucson, Arizona, U.S., on May 11.
Photographer: Cheney Orr/Bloomberg

At the start of the pandemic, young people were told to stay at home as an act of selflessness: Do it for dad. For grandma. For your neighbor. Then states started reopening and, almost instantly, photos began circulating of packed clubs and crowded restaurants. There were massive street protests over police brutality and racial injustice. Case counts soared to record levels.

“We did jump the gun on reopening too soon,” said Ian Grimes, 27, of Austin, home of Texas’s flagship university, scores of technology companies and a self-consciously bohemian party culture. “Especially us Austinites, we’re impatient when it comes to having fun.”

Grimes, who is in real estate, sits outside when grabbing a beer and wears a mask if he’s out and about. But his brand of conscientiousness is offset by rambunctious peers bursting out of lockdown.

“There’s complete burnout,” said Sandy Cox, mayor of Lakeway, an Austin suburb. Last week, Cox posted a live video on Facebook warning residents that high schoolers had held a “very large party” just outside her city. Since then, a number of those who attended have tested positive for Covid-19, according to Austin Public Health.

“You’re young, you’re invincible, you don’t think it’s going to happen to you, and if it happens to you, you think you’re going to be fine,” Cox said in an interview. “The messaging is care for thy neighbor, but it is hard to get through to people.”

Officials around the nation are trying their best. On Wednesday, Miami Beach instituted a 12:30 a.m. curfew. California closed restaurants, bars, museums and movie theaters in 19 counties, including Los Angeles.

Arizona and Texas had already closed their bars. Madison, Wisconsin, and surrounding Dane County did the same on Wednesday following a surge in cases. Over roughly two weeks in June, 614 people in the county tested positive, almost half of them from the ages of 18 to 25. Of those cases, 132 people traced their infection to bars.

“Gathering in bars in particular is a concern because groups of people mix, bars are often loud spaces that require loud talking to communicate (which can spread infectious droplets farther), alcohol impairs the judgment of patrons, and people often are not able to identify or provide contact information for the people they were in close contact with,” the local public health office said in a statement. 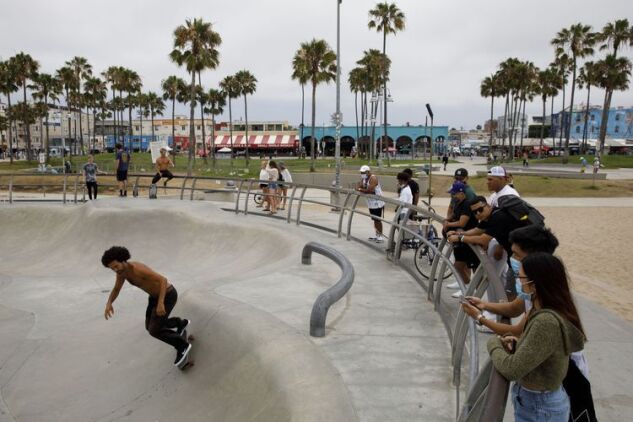 Packed clubs and high-school ragers are obvious dangers. But many cooped-up people in their late teens and 20s have engaged in what they thought were lower-risk activities only to be unpleasantly surprised.

Sequoia Gregory, a 17-year-old in Eugene, Oregon, got to see her friends for the first time two weeks ago. She was in isolation for four months. They kept their distance, particularly because Gregory’s mother has stage 4 colon cancer and Gregory worried about making her sicker still. She’s glad she did: Turns out that her friends had been hanging out with people who tested positive after a house party.

Younger people are far less likely to die from Covid-19 than those 65 and older. And because testing was initially limited to those who were hospitalized, the drop in median age may be partially attributable to increased access to tests.

“It’s hard to assign causality to some of the aspects of this, but there is no question that it’s a real uptick in cases and that’s not simply a reflection of testing,” said Caroline Buckee, associate director of the Center for Communicable Disease Dynamics at the Harvard T.H. Chan School of Public Health.

In Houston, where hospitals have been strained by the influx of patients, many young people are in intensive care, David Persse, the city’s director of emergency medical services, said during a media briefing Monday.

Simran Bal, a 23-year-old Chicago resident, fears the only way some of her peers will get the message is if a close friend gets severely ill.

“It’s pretty disheartening to say that I feel like extreme measures are the only way people are going to get the idea,” said Bal, who has to navigate crowded pubs when she picks up orders for Door Dash.

That’s part of the reason 21-year-old Kate Capitano plans to be especially careful when she returns to the University of North Carolina this fall, even though she’ll be surrounded by students and not aging relatives.

“Our biggest thing is getting people to be able to socially distance inside the house,” said Capitano, who’s president of the Alpha Delta Pi sorority chapter. Each room will house just two women versus the typical four, she said, and there won’t be any social functions at bars. 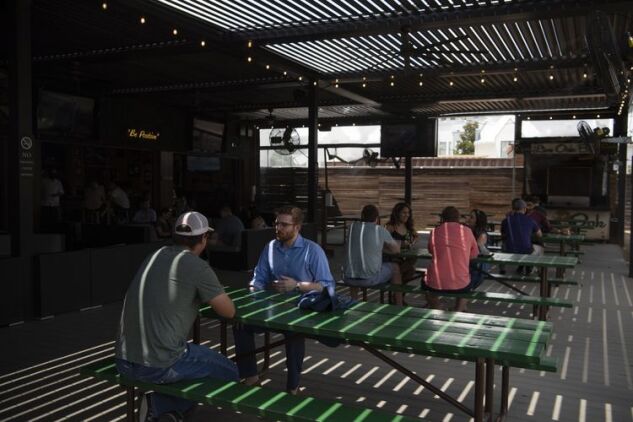 People sit inside a bar in Houston, Texas, U.S., on May 23.
Photographer: Callaghan O’Hare/Bloomberg

One way public health officials can help prevent the type of lockdown-burnout that may have led young people to flock to bars and parties is by emphasizing risk reduction, said Catherine Troisi, an epidemiologist at the UTHealth School of Public Health in Houston.

“As we know with sex education, abstinence doesn’t work that well,” she said. “It’s really about risk reduction, not holing yourself up in your bedroom for weeks.”

But Lily Scott, an 18-year-old Austinite, said she’s probably going to cancel a trip with friends to the beach town of Port Aransas as cases in Texas climb.

“It’s hard to see our generation being represented this way, because so many of us are being cautious and trying to flatten the curve,” she said. “I’m trying to be a team player.”