In March, New York City issued new public-health guidance that appeared to contradict the city’s shelter-in-place orders. In an online guide, the city health department suggested “how to enjoy sex and avoid spreading Covid-19.” While all New Yorkers should stay home, the city said, the guidance offered practical advice to reduce risk if someone did break the rules. Kissing, for example, should be reserved only for a close circle of contacts.

As the outbreak drags on, social-distancing rules are evolving into a balancing act, with shades of gray based on new understanding about risk from the disease. In many parts of the country, the spread of Covid-19 has slowed, prompting policy makers to roll back restrictions. And yet it’s still many months—or perhaps a year or more—until the availability of a vaccine, meaning secondary outbreaks of disease are likely.

“It’s not going to look the way it did before,” said Julia Marcus, an epidemiologist at Harvard University who has led a public campaign for more nuanced social-distancing guidelines. “We have to adjust to a new normal.”

Given what scientists and researchers have learned over the past months, that means it’s probably fine to have some fun and see a limited number of friends; just make sure that socializing is outdoors, the experts advise.

“Most of the infections actually occur within close contact, which means face-to-face contact with an infected person for a minimum of 15 minutes, or spending time together in the same room or enclosed environment,” said Muge Cevik, an infectious-disease researcher at University of St Andrews who has been studying viral spread.

In some regions of the U.S., public policy is adjusting accordingly. In San Francisco’s Dolores Park, for example, the city outlined circles in the grass to encourage people to enjoy the iconic space while remaining six feet apart. New York City, Oakland, California, and other cities have closed down streets to traffic to encourage people to spend more time out of doors.

In April, the U.S. Centers for Disease Control and Prevention added language to its website to clarify details about viral spread, reducing some of the early fears over contaminated kitchen counters and packages arriving by mail. “While it may be possible that a person can get Covid-19 by touching a surface or object that has the virus on it and then touching their own mouth, nose, or possibly their eyes, this is not thought to be the main way the virus spreads,” a CDC spokeswoman said.

But overall guidelines remain for the most part either vague or, on the other end, treat risk as black and white. Even when it comes to outdoor activities, said Cevik, risks come in many shades. Contact tracing of cases, for example, has shown that eating together seems to lead to more spread of the virus, even though generally touching a surface does not.

The virus is thought to spread mainly through respiratory droplets when an infected person coughs or sneezes, according to the CDC. Those can then land in the mouths or noses of nearby people or potentially be inhaled into the lungs.

Crowded indoor environments, like subways, for example, may not be safe for a long time. Indoor dinner parties or even outdoor potlucks are probably out for the time being, too. We also have a better idea of which groups of people, such as the elderly, are particularly susceptible to the virus and should practice more caution. But that doesn’t mean that there can’t be some return to low-risk social activities.

“People are confused about why we are in lockdown. It is not to reduce every single contact,” she said. “I see people worrying about passing by strangers on the sidewalk, but feel more comfortable having a birthday party indoors.” 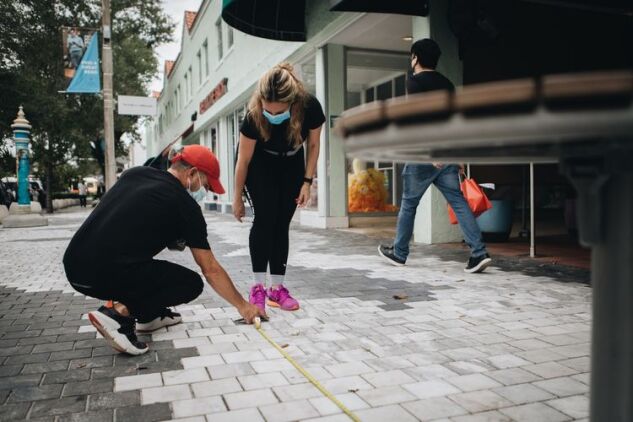 Employees measure the distance between tables at a restaurant in Coral Gables, Florida on May 18.
Photographer: Jayme Gershen/Bloomberg

Some, including the public-health organization Vital Strategies, have suggested issuing color-coded alerts that clearly communicate to the public how bad levels of virus are in a particular community so people might adjust their activities appropriately on any given day. (Vital Strategies has received funding from Bloomberg Philanthropies, the charitable foundation started by Michael Bloomberg, the founder and majority owner of Bloomberg News’s parent company.)

“We’re probably going to be lucky for the summer,” Zeke Emanuel, an oncologist and bioethicist at the University of Pennsylvania, said at a Connecticut press conference on the state’s reopening this week. Other coronaviruses tend to peak in the winter, so experts are worried the fall may bring another wave of disease. “Come fall, the situation is going to reverse,” Emanuel said.

Much of the call to offer more nuanced social-distancing guidance has come from researchers who study human immunodeficiency virus, or HIV. In the AIDS epidemic of the 1980s, abstinence-only messaging didn’t work. Encouraging people to use protection when having sex did. Experts say the same principle applies today.

“Social distancing was very April 2020,” said Gregg Gonsalves, an epidemiologist at Yale University who studies HIV. “But there is a hierarchy of safety which we can integrate into our lives.”

Now that the spread of the virus has begun to slow, for instance, it’s also important to begin balancing concerns about the virus with mental health.

“There may be people who really need human contact right now because they’ve been completely isolated for two months and they’re acutely depressed,” Marcus said. “That really small risk of having a drink with somebody in the backyard is potentially worth the benefit of having that human interaction.”

To contact the author of this story:
in San Francisco at kbrown340@bloomberg.net

To contact the editor responsible for this story:
at eschine@bloomberg.net