A gene therapy considered to be the world’s most expensive drug raises questions about how to pay for it, and the federal agency overseeing Medicare and Medicaid could play a central role in ensuring patient access to potentially lifesaving medicines.

The Food and Drug Administration approved late last year CSL Behring’s hemophilia B gene therapy Hemgenix, a one-off infusion that costs $3.5 million a dose, making it the world’s most expensive drug. The field of gene therapies, which modify a person’s cells to treat or potentially cure a particular disease, is growing exponentially. Industry group Alliance for Regenerative Medicine has said it expects at least five more gene therapies to come to the US market in 2023, including potential new treatments for sickle cell disease and hemophilia A.

Additional gene therapies for conditions impacting wider swaths of the US population, including diabetes and heart failure, are also coming down the research pipeline. Drug pricing analysts say this development means the need is more urgent than ever for the Centers for Medicare & Medicaid Services to develop payment models ready to cover the costs of these pricey, novel therapies.

“We need to be prepared and already ready to roll out” payment models “if you want to see a future where patients have access to the newest technology and can be cured,” said Girisha Fernando, CEO and founder of Switzerland-based health-care software analytics company Lyfegen.

The CMS through its Medicare policies always has a big impact on what insurers pay for procedures and drugs. In this case, the role could be even greater since the agency is the keeper of massive amounts of data on pricing, safety, and effectiveness.

For example, conversations on how health insurers can pay for expensive gene therapies came up in 2019, as the CMS was determining coverage for CAR T-cell therapy, a novel treatment for leukemia and lymphoma. The agency eventually said it would cover the therapy when administered at health-care facilities enrolled in the FDA’s safety program for the therapy and “used for a medically accepted indication.”

Policy analysts say there’s no clear one-size-fits all solution to pay for expensive gene therapies. But the CMS and other payers have explored some models already—such as subscription payments to manufacturers for therapy access, or coverage based on the value the treatment provides to patients.

Gene therapies can target the underlying causes of conditions that have long gone without cures. ’s Zolgensma for babies with spinal muscular atrophy was priced at $2.1 million when it was approved in 2019. In 2022, ’s Zynteglo for the blood disorder beta thalassemia came in at $2.8 million.

These therapies can be complex to research and manufacture, in part because they’re usually developed for rare diseases with smaller patient populations, said Mark E. Miller, executive vice president at philanthropy-funded Arnold Ventures.

“You don’t have a lot of people, so getting an active, working clinical trial can be difficult,” Miller said.

Melinda Kliegman, director of public impact at the California-based Innovative Genomics Institute, said another component is the value that developers assign to their products.

Unlike most other medicines, gene therapies typically only have to be administered once, and if successful, have the potential to eliminate future health-care costs associated with a particular disease or condition. For patients with severe hemophilia, the average annual cost for clotting factor therapies is roughly $300,000, according to the National Hemophilia Foundation.

“Because these therapies are changing the genome, they are durable, so typically you can get a ‘cure’ for the rest of the patient’s lifetime, and that negates any future health-care costs,” Kliegman said. 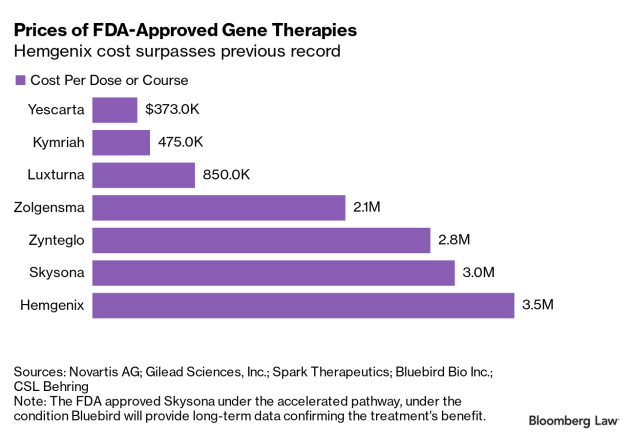 The agency has experimented with a coverage option that includes upfront payments or subscription agreements from state Medicaid programs to manufacturers. In exchange, the manufacturers agree to set lower prices for gene therapies.

Under this model, a manufacturer gets “a block of dollars up front,” and “the drug is available to the population in question,” Miller said.

Some states have explored this option. In 2019, both Louisiana and Washington implemented subscription models for hepatitis C drugs, in which the states’ Medicaid programs were given unlimited rights to use the drugs at a capped price that the states paid over time.

“It’s working like more as an investment earlier on, but guaranteeing a little bit of a lower price down the road,” Kliegman said.

The CMS already has several programs that link coverage based on the quality of care, and an agency rule that went into effect in July 2022 allows manufacturers to report “best price” points as part of value-based purchasing arrangements with state Medicaid programs.

These contracts between health payers and therapy manufacturers intend to “measure how well those drugs work and include that specifically in the price of the drug,” said Lyfegen’s Fernando. He said his company has helped implement more than 400 value-based contracts across therapies in countries like Portugal, Spain, Saudi Arabia, and Canada, and is currently looking to expand its work in the US.

Bluebird recently announced it collaborated with health-care advisory firm Real Endpoints to offer health plans access to value-based contracts for Zynteglo. The agreement offers rebates of up to 80% of the therapy’s cost if a patient fails to reach and maintain red blood cell transfusion independence up to two years post treatment.

“Value-based contracting can use metrics to align the price with the value that it provides either financially or clinically, and in certain cases, even both,” Fernando said. “If the drug performs as expected or better, there’s a payment associated to that either in full or even a bonus payment for a pharma company.”

But a critical issue with outcome-based contracts for gene therapies is an “underlying lack of certainty” on the value that should be assigned to a particular patient outcome, said Anna Kaltenboeck, head of the Drug Pricing Practice team at health-care research firm ATI Advisory.

Many of these therapies are developed for rare diseases or other particularly serious conditions, so the FDA may allow expedited review and approval. Hemgenix, for example, received priority review, as well as Orphan Drug and Breakthrough Therapy designations, from the FDA.

This means “the insurance company doesn’t have a lot of information about how well the product works” long term and how durable the outcome is, Kliegman said.

Individual arrangements between a given manufacturer and health plan may not be able to adequately collect the data needed to determine the prolonged value of a gene therapy, Kaltenboeck said.

This is where the CMS could step in, she added.

“This is the moment we need to sort of step back and say, ‘Is this a paradigm change, not just on the reimbursement side, but where we get that data?’” Kaltenboeck said.

One option is for the CMS to allow coverage for the therapy only in certain clinical trial settings. That would push drugmakers to prove their products provide a tangible clinical benefit to patients. The CMS approved the use of ‘s Alzheimer’s drug Aduhelm under this option due to uncertainty over whether lowered levels of amyloid protein plaques in the brain is an adequate predictor of slowed progression of the memory-loss disease.

“CMS could play this role in aggregating that data, making sure it comes together, and accounting not just for the quality of the treatment itself, but also how these people are being treated, where they’re being treated—all of which is going to matter for how these things work in the long run,” Kaltenboeck said.

To contact the editors responsible for this story: at csaenz@bloombergindustry.com; at khardy@bloomberglaw.com