Trump was joined by HHS Secretary Alex Azar to announce plans for lowering drug prices at the White House on May 11, 2018.
Photographer: Andrew Harrer/Bloomberg

Staffers at the Department of Health & Human Services have gotten used to a pattern: President Donald Trump sees a news report about spikes in prescription-drug list prices, Secretary is called to a meeting in the Oval Office, and a policy in the discussion stage gets accelerated and pushed out the door.

It’s happened at least three times, each within a week after Trump heard a news report about drug prices. Each meeting led to the public release of a proposal shortly afterward. In one instance, Trump took the highly unusual step of attending the announcement of a proposed rule.

While it’s no secret Trump has been focused on lowering drug prices, the level of his hands-on involvement—described by two former administration officials familiar with the pattern—demonstrates his fixation on the issue even as he constantly changes positions and priorities on other issues. This means that drug companies may need to be conscious that they can’t sneak in price increases because they’re likely to lead to more regulations for their industry.

Trump “thinks about governing the way he thought about running his company,” Christopher Holt, director of health-care policy at the center-right think tank American Action Forum, said. The president thinks the U.S. should be able to leverage its market power of Medicare beneficiaries to get good prices, but he sees other countries getting better deals and “equates that to losing,” Holt said.

“Anytime he sees a story” about drug companies raising their prices, “he’s going to react to that,” Holt said. 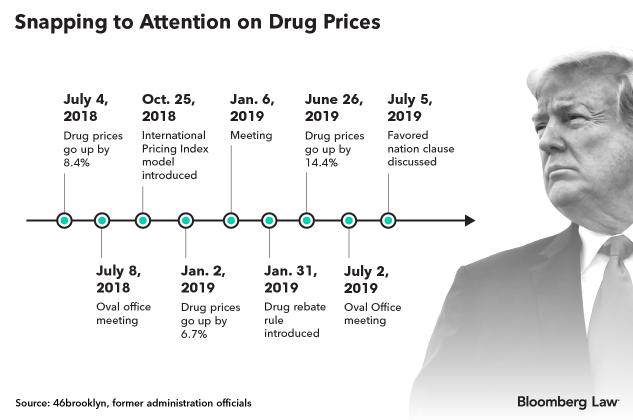 Trump is preoccupied with drug prices because he’s “following the polls, and consumers are fixated on it,” said Wayne Winegarden, a senior fellow at the San Francisco-based free-market think tank Pacific Research Institute. Drug prices are one of the most visible parts of the health-care system, and patients interact with it more, so it’s top-of-mind.

White House spokesman Judd Deere declined to respond to specific questions about these series of events.

“The president meets multiple times a month with his health-care policy team to continue work on his health-care vision of delivering quality care at an affordable cost for all Americans, which includes lowering outrageously high drug prices—prices that have already decreased for the first time in 50 years because of the president’s policies,” he said in a statement to Bloomberg Law.

In early July 2018, Trump called a meeting in the Oval Office with then-Chief of Staff John Kelly, Office of Management and Budget Director Mick Mulvaney, Azar, and other high-level staffers to discuss potential options to address high drug prices, according to a former administration official.

That followed a month in which list prices for 140 brand drugs went up 8.4%, according to the nonprofit price tracking group 46brooklyn. That increase affected more drugs than any other increase since the beginning of that year. Prices had increased in July and January, but overall 2018 was a fairly quiet year. In 2017, there had been hikes in both June and July for over 530 brand name drugs, according to 46brooklyn.

At the time of the meeting, the HHS had been working on a proposal to tie Medicare reimbursements to foreign countries’ drug prices. It was just one of many policies under consideration to lower drug prices, and staffers at the Centers for Medicare & Medicaid Services were still hammering out issues like the size and scope of the model and the types of drugs that would be included, another former administration official said.

The CMS had planned on releasing the rule as an advanced notice of proposed rulemaking, an interim step before putting out a complete proposal, in part because career and political officials were concerned about a backlash. The Obama administration released a similar proposal that was met with resistance from drug companies, and Trump officials thought an advanced notice would temper industry backlash and buy time to work on the problems with the rule, the official added.

But when Azar mentioned the international pricing index model in the meeting, Trump told the staffers to move forward, moving it from early consideration to a fast track for release, one of the former administration officials said.

The International Price Indexing model never had the internal disagreement that occurred with a separate, now-defunct drug rebate rule, largely because of how much Trump liked it, a drug lobbyist said. The rebate rule was a policy that would have ended the rebates that drug manufacturers pay to pharmacy liaisons.

By October, the IPI model was officially announced, and Trump attended the release of that policy at the HHS headquarters alongside Azar. It’s unusual for any president to announce a policy at the HHS building, let alone a detail-averse one, the former administration official said.

The same pattern repeated itself this year.

When brand drug prices went up again in January 2019 by 6.7%, Trump called another meeting in the Oval Office to brainstorm policy. He was particularly incensed by a Wall Street Journal story, picked up by Fox News, that drugmakers planned to raise their prices on hundreds of drugs, a person familiar with the discussion said. Azar came forward with the drug rebate rule, and Trump again told the staff to move forward with the proposal, the former administration official said. The rule was announced by the end of the month.

Most recently, brand drug prices went up once more in June by 14.4%, according to 46brooklyn, and on July 2, Trump called another meeting. That discussion involved Azar, now Acting Chief of Staff Mulvaney, Domestic Policy Council Director Joe Grogan, CMS Administrator , and other high-level staffers, according to sources briefed on the meeting.

Days later, on July 5, Trump announced his administration was working on a favored nation clause to allow the U.S. to buy drugs based on the lowest prices paid by other countries.

The International Pricing Index model is expected to be released in September, the drug rebate rule was killed by the White House in July, and the favored nation clause has yet to be officially rolled out.

“We need a well-developed consistent policy that improves the incentives” in the drug market, but a lot of the current policies by this administration “are just knee-jerk reactions and not really good policy,” Winegarden said.