Pro-vaping groups are mounting an uphill campaign to persuade federal and state authorities to let vape shops remain open even as other retailers close their doors during the growing outbreak of the new coronavirus.

Advocates say vape shops are essential businesses that help keep Americans from buying traditional cigarettes. If successful, an industry that was just granted more time to sell some popular vaping flavors would score a major win.

“We appreciate entirely the need to flatten the curve, but doing that shouldn’t come at the expense of adult ex-smokers coming back to deadly combustible cigarettes,” said , president of the American Vaping Association.

Public health organizations, by contrast, say e-cigarettes and vaping products could put people at increased risk of lung damage. State and local governments should encourage smokers to quit and e-cigarettes could make their users vulnerable to complications if they contract the coronavirus, Erika Sward, assistant vice president of National Advocacy for the American Lung Association, said.

“There is no cause, no reason for any sort of e-cigarette store to remain open let alone as an essential business right now,” Sward said.

Some of the largest sellers of vaping products and e-cigarettes, including Juul Labs Inc. and, parent of Blu, may remain largely unhurt by business shutdowns because the convenience stores and gas stations that sell their products are sold have generally been allowed to stay open. 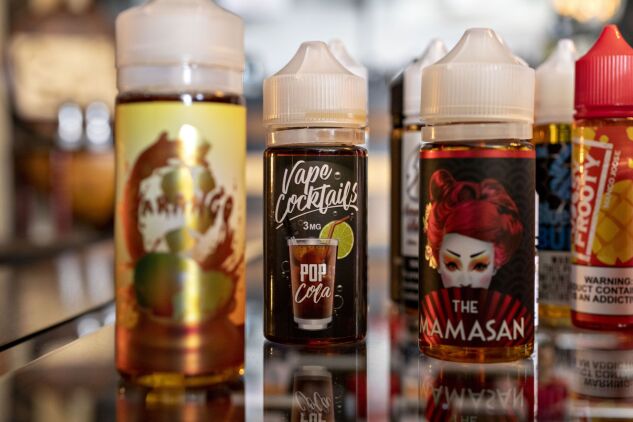 Bottles of vape juice for electronic cigarettes are seen at Sinbad Vapors in Peru, Ill., on Sept. 16, 2019.
Photographer: Daniel Acker/Bloomberg

About 10,000 vape shops were operating in the U.S. in the 2016, almost triple the number from just three years before, according to a study published in the journal BMJ. However, several states have in recent years banned popular vaping flavors these shops sold, and the federal government this year similarly began to restrict flavors.

There were 30 statewide orders as of Monday for people to stay at home as much as possible, with the hardest-hit states, including New York, California, and Maryland, ordering the closure of nonessential businesses to slow the rapid spread of the coronavirus. Grocery stores, gas stations, and a long list of other businesses can still operate but retailers have largely been asked to close their doors to the public.

Conley’s group is planning to lobby the Department of Homeland Security to get on the agency’s list of essential businesses that many state governors have used as a guide for deciding what can stay open during stay-at-home orders.

Conley said the success of the firearms lobby, which got gun shops added to the DHS list of “essential critical infrastructure workers” with the aid of lawmakers like Sen. (R-Ky.), showed the Trump administration is open to expanding it.

The federal list is meant to identify workers in areas such as defense, food, government, energy, transportation, and health care that are critical for public health and safety, according to the agency’s website.

Christopher Krebs, director of DHS’s Cybersecurity and Infrastructure Security Agency, said his agency updates the list to include “additional services and industries that are essential, reflecting the demands of current events as well as supply chain complexities.” The list is meant to be advisory, he said in a statement.

State governors can choose which businesses can remain open, and they are the focus of lobbying by the Consumer Advocates for Smoke-Free Alternatives Association, another pro-vaping group.

The organization has prompted 2,300 people to write emails or send messages to their governors asking them to add vape shops to their list of essential businesses allowed to operate amid the shutdown. They argue that the shops are vital small businesses that are keeping many adults from smoking traditional cigarettes.

Alex Clark, chief executive officer of CASAA, said vape shops can generally be run by a single person offering curbside pickup service, similar to how many restaurants are currently operating.

“Many retailers are absolutely capable of conducting business and not putting their customers at risk,” Clark said.

So far, no states have included vape shops on their list of essential services.

Clark said he doesn’t expect many governors, if any, will add vape shops to the list, but the campaign could help when individual vape shop owners seek permission to remain open amid stay-at-home orders.

“It is not politically expedient for many people in government to even be perceived as being lenient to these products,” Clark said.

(Updates with comments from DHS and American Lung Association starting in fourth paragraph.)