California Gov. Gavin Newsom likes to say he’s “meeting the moment” when tackling the state’s problems. With a rocky Covid-19 vaccine rollout and potential recall election, the first-term Democrat will need to seize the moment before he delivers his next State of the State address.

“The most important thing is to give people hope that we can get through this pandemic,” said former Gov. Gray Davis (D), who voters recalled in 2003. “We haven’t dealt with something like this for 100 years, there’s no one who has the playbook, there’s no precedent. So everyone from scientists to medical researchers, to governors, to mayors are learning as they go.”

What Newsom says in his as-yet-unscheduled annual address and how it’s received could be pivotal. While contending with the same challenges as many other governors—getting scarce vaccine doses to tens of millions of residents, curtailing a growing unemployment rate, and preparing to run for reelection next year—Newsom has other problems his colleagues don’t share.

Newsom, elected in 2018, repeatedly has declined to comment on the recall attempt, saying he’s focused on leading the state out of the pandemic.

To that end, more than one in 10 Californians has received at least one dose of the Pfizer Inc. or Moderna Inc. vaccines; Newsom’s administration has launched mobile vaccination units to inoculate people who can’t leave their homes; and Project Roomkey, the first of its kind in the nation, pays motel and hotel owners to provide rooms for the homeless while they quarantine and recover from Covid-19. 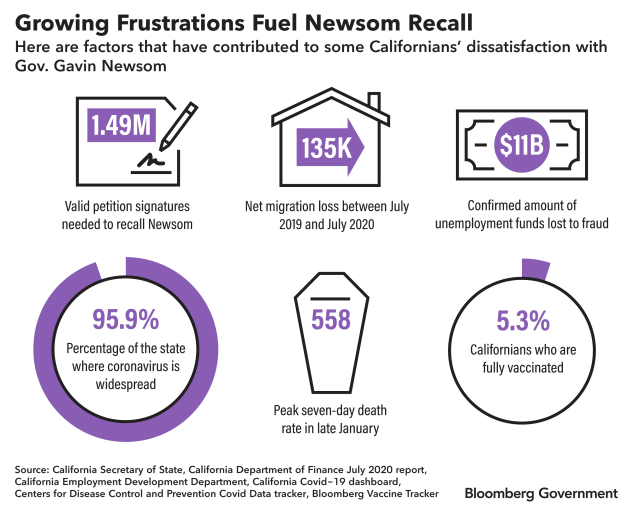 Over 50,000 people in the state have died from the virus, and the Newsom team hasn’t figured out how to get vaccines to underserved communities.

Latinos make up nearly 40% of California’s overall population, but 55% of all Covid cases and 46% of deaths. So far they comprise about 17% of those receiving immunizations, according to state vaccine data.

Unreliable deliveries of vaccine doses have caused mass vaccination sites like Dodger Stadium in Los Angeles and San Francisco’s convention center to close for days. And one county health official said official data for her county’s rate of vaccine administration was off by 30%.

More recently, the governor came under fire from Republicans for granting multimillion-dollar exclusive contracts to Blue Shield of California, UnitedHealth, Bloom Energy, and others for pandemic-related services. Those companies collectively donated $356,000 to Newsom’s political campaign committees in 2020. 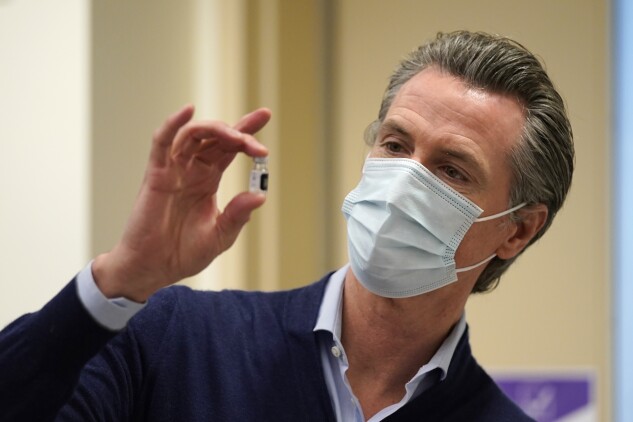 Gov. Gavin Newsom (D-Calif.) holds up a vial of vaccine as initial doses were administered on Dec. 14, 2020.
Photo by Jae C. Hong-Pool/Getty Images

Newsom said he chose Blue Shield as the third-party manager of the vaccine rollout to “move expeditiously.” No other bids were considered for the contract, worth up to $15 million.

That didn’t violate state ethics rules, though the contracts could create the appearance of an ethical conflict, said Mary-Beth Moylan, a professor at the University of the Pacific McGeorge School of Law.

“As long as we let corporations contribute and spend on campaigns, we create situations where there might be an appearance of favoritism based on those contributions,” Moylan said in an email.

Like many other governors, Newsom’s poll numbers have tanked during the pandemic, dropping from a 64% approval rating in September to a 46% approval rating last month, according to the Institute of Governmental Studies at the University of California, Berkeley.

And while Democratic state and local lawmakers, as well as President Joe Biden, oppose the recall, their support may not be enough.

Registered Democrats outnumber Republicans nearly 2 to 1, but almost one-quarter of voters are registered as having no party preference and they could be a factor if there’s a recall vote.

“What he needs to worry about is keeping Democrats on his side,” said Sherry Bebitch Jeffe, a retired professor of public policy at the University of Southern California and co-host of the “Inside Golden State Politics” podcast.

Backers of the recall effort say they’ve gathered about 1.8 million signatures so far; they must submit to county election officials at least 1.49 million valid signatures by March 17. If the recall is successful, Newsom would be the first governor to be kicked out of office by voters since Arnold Schwarzenegger (R) replaced Davis in 2003.

Newsom has hired a veteran communications consultant to focus on businesses that have suffered during the pandemic. Dee Dee Myers, a former Clinton White House press secretary and longtime Democratic political operative, now heads the Office of Business and Economic Development, arriving as most restaurant dining, hair salons, and indoor church services were closed by a regional stay-at-home order and some of the state’s biggest companies—and wealthiest taxpayers—said they’re relocating.

Elon Musk, CEO of Tesla Inc. and one of the richest people in the world, moved to Texas and has said he plans to relocate his company to Austin. Hewlett Packard Enterprise Co., Oracle, Palantir Technologies Inc., Charles Schwab Corp., McKesson Corp., and Colony Capital Inc. also announced plans to move their operations outside California. Nearly half of California’s personal income tax collection comes from the top 1% of earners, according to the California Tax Foundation.

Ordinary Californians also are packing up.

Between July 2019 and July 2020, 135,400 more people left than moved into the country’s most populous state, contributing to a record-low growth rate. The state is projected to lose a congressional district for the first time in its history after this year’s U.S. Census reapportionment.

Critics say Newsom is quick to announce a new task force or directive that does little to remedy problems. Take California’s beleaguered Employment Development Department: unemployment grew to 9% in Decemberand over 52,000 jobs were lost as millions wait weeks to access unemployment benefits.

Newsom’s “strike team” to fix the agency’s problems issued recommendations last September, including a goal to eliminate the backlog by January. While the agency cut the 1.6 million claims in the queue from September, the backlog ballooned in the fall and winter: as of Feb. 17, nearly 1 million claimants were waiting for their first payments. Agency officials said last month that about $11 billion in federal and state unemployment funds were lost to fraud.